“May 28 marks the establishment of the Azerbaijan Democratic Republic (ADR) – the first parliamentary republic in the Muslim world. The Republic of Azerbaijan, which restored its independence on 18 October 1991, is the successor of ADR. 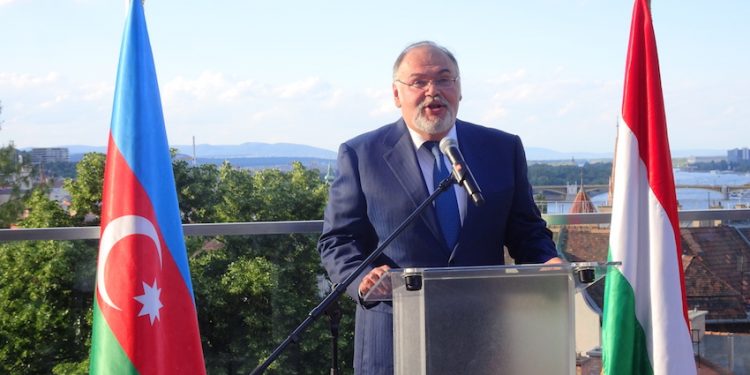 On the occasion of the 104th Independence Day, observed annually on 28 May, the Embassy of Azerbaijan in Hungary hosted a grand reception at Aranybástya Restaurant, attended by the Political Director of the Hungarian Ministry of Foreign Affairs and Trade, high officials of government agencies, heads of diplomatic missions and diplomats from 45 countries, the Budapest Office of the Organisation of Turkic States, representatives of business and academic circles, members of the Azerbaijani community, including students studying in Hungary.

The wonderful panorama of Budapest, opening from the terrace of the historic site in Buda Castle, provided an extraordinary setting for the festive atmosphere as an additional attraction.

After the national anthems of Azerbaijan and Hungary, played at the beginning of the event, H.E Tahir Taghizade, Ambassador of the Republic of Azerbaijan to Hungary welcomed the invitees and the guests of honour: Mr Sándor Lezsák, Deputy Speaker of the Hungarian National Assembly, and Mr Ali Huseynli, First Deputy Speaker of the Azerbaijani Parliament, Head of the Azerbaijan-Hungary Inter-parliamentary Friendship Group, and addressed the audience: 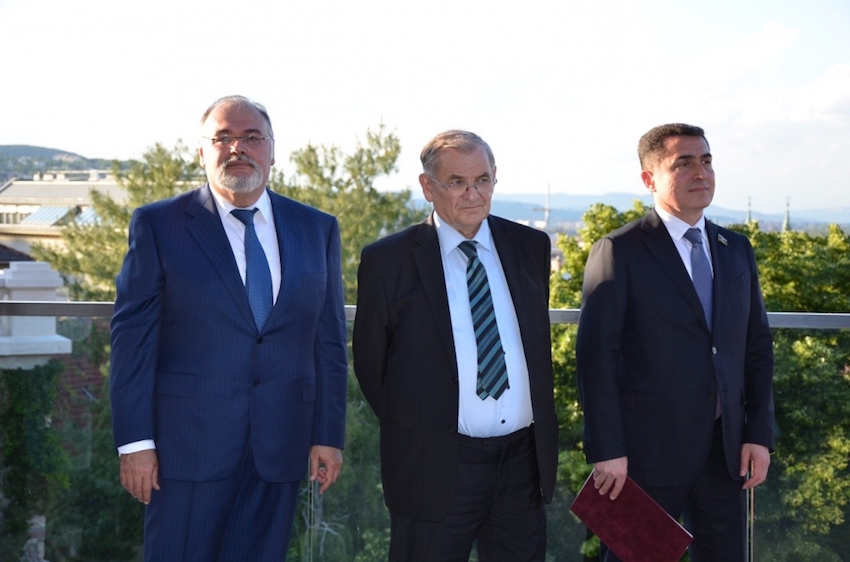 “May 28 marks the establishment of the Azerbaijan Democratic Republic (ADR) – the first parliamentary republic in the Muslim world. The Republic of Azerbaijan, which restored its independence on 18 October 1991, is the successor of ADR.

As a result of the 44-day Patriotic War (between 27 September – 10 November 2020), Azerbaijan liberated the territories, occupied by Armenia for 30 years, and restored its territorial integrity by implementing 4 UN Security Council resolutions. During this period, the position demonstrated by the Hungarian government, based on the principles of justice and international law, contributed to further strengthening the strategic partnership between our countries. We highly appreciate the grant provided by the Hungarian government for demining the liberated territories.

Azerbaijan has embarked on a wide-range and ambitious work aimed at healing the humanitarian, social, economic and cultural wounds of the conflict. In this regards, we welcome the interest of Hungarian companies in participating in the reconstruction process in Karabakh, and the credit line provided by Eximbank on this purpose. Azerbaijan remains poised to continue its efforts towards post-conflict normalisation. Azerbaijan is resolute to reintegrate persons of Armenian origin into the political, economic, social and cultural system of Azerbaijan as equal citizens based on the rule of law. The first meeting of the Commission on Border Delimitation took place on 24 May 2022 at the interstate border between the Deputy Prime Ministers of Azerbaijan and Armenia.

The energy sector is one of the key areas of cooperation between the EU and Azerbaijan, as well as between our countries. Hungary’s intention to start importing Azerbaijani gas from the end of 2023 will further contribute to our cooperation. Azerbaijan’s “energy dialogue” with the EU also covers renewable energy and hydrogen.

The current geopolitical situation increases the importance of the Middle corridor – the Trans-Caspian International Transport Route for transportation projects between East and West. Geographical location of our countries creates opportunities for cooperation in this area.

We welcome the signing of the Memorandum of Understanding between the Alat Free Economic Zone (AFEZ) and the Hungarian Export Promotion Agency (HEPA) earlier this year and looking forward to the involvement of Hungarian companies in AFEZ. We are very interested in close cooperation with WizzAir to make Baku a regional transport hub.

We highly appreciate the support of Hungarian institutions and companies in providing safe travel to hundreds of Azerbaijani citizens and their family members fleeing from Ukraine due to the ongoing crisis.

In 2023, the city of Shusha will be the Cultural Capital of the Turkic world, while the Hungarian city Veszprém will be the European Capital of Culture. Cooperation between these two cities during this period will further contribute to the strengthening of Azerbaijan – Hungary cultural relations.

We look forward to continuing our cooperation in the education field. 200 scholarships provided by the Hungarian government for Azerbaijani youth have increased our people’s interest in studying in this beautiful country and they will serve as “goodwill ambassadors” of Hungary in the future.

This year, on 27 April, we celebrated the 30th anniversary of the establishment of diplomatic relations between Azerbaijan and Hungary. An exchange of letters took place between the Leaders and Ministers of Foreign Affairs.

During my visit to the University of Sopron, I get acquainted with the management of the university, the academic staff and the students. We also planted the Azerbaijani Khan Chinar (Platanus orientalis) as a symbol of long-standing relations between our countries.

In addition, a photo exhibition dedicated to the 30th anniversary entitled ‘Azerbaijan – Land of Fire’ was opened in one of the central parts of Budapest. 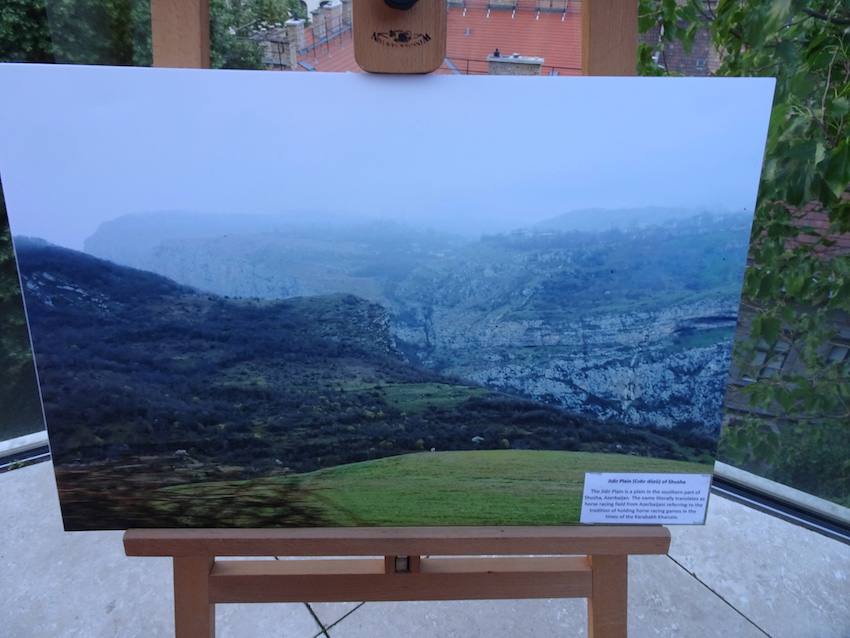 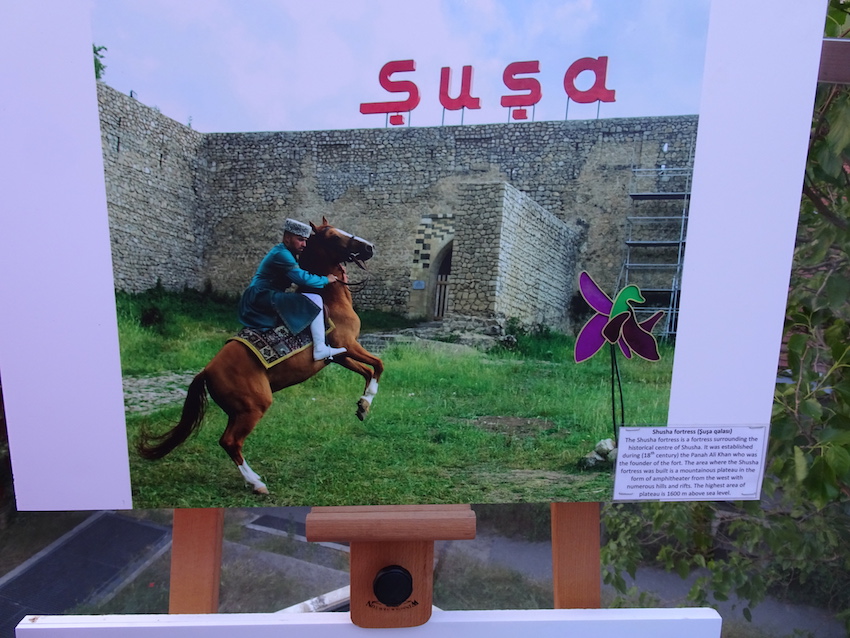 Our nations highly value their independence and that’s why my posting here is of great importance to me. Ferenc Rákóczi, Lajos Batthyányi, István Tisza, Imre Nagy, and their strife reminds me of similar cases in the history of Azerbaijan – the selflessness shown by Ibrahim Khalil khan Javanshir of Karabakh, Fatali khan Khoyski and, ultimately, Heydar Aliyev.

All the mentioned points demonstrate the high level of friendly bonds between Azerbaijan and Hungary. Let the independence of our countries and our strategic partnership last forever. Thank you for your attention.”

Special guest at the event, Mr. Sándor Lezsák, Deputy Speaker of the Hungarian National Assembly took the floor and conveyed his heartfelt congratulations and best wishes to the leaders and people of Azerbaijan for their remarkable achievements and continued excellence on the momentous Independence Day. He highly valued the strategic partnership, friendship, intensive bilateral political dialogue and the growing economic and cultural ties between the two countries. He was very pleased to announce that after a hiatus due to the pandemic, the Hungarian Turan Association, established by the Hungarian Turan Foundation, will again host the traditional event first organised in Hungary in 2008: the Celebration of Great Kurultaj – a Hungarian tribal gathering in Bugac, a village in the Southern Great Plain region between 12-14 August 2022, the largest festival based on thousand-year-old steppe-nomadic traditions and horse culture in the Carpathian Basin. Many guests are expected at this event. (http://kurultaj.hu) 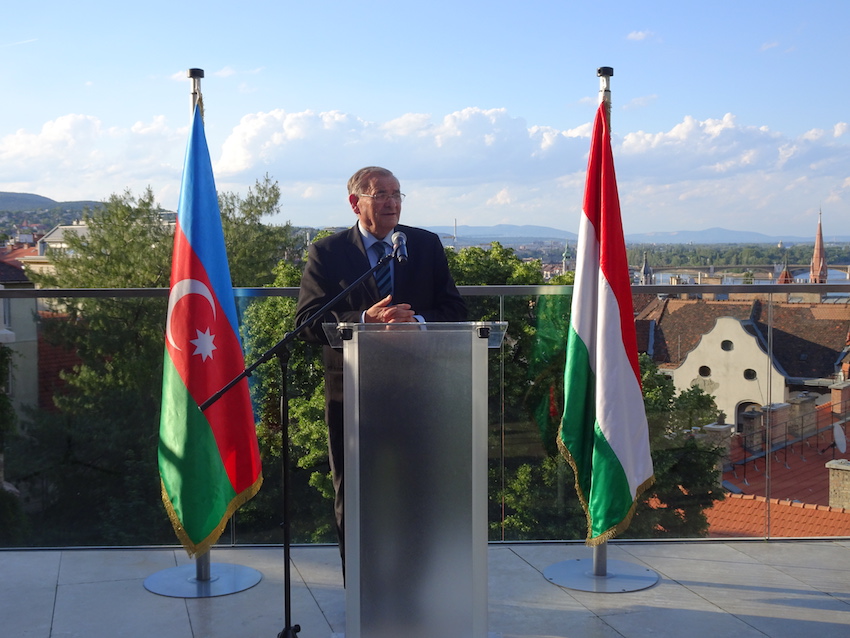 The next orator, Mr. Ali Huseynli, First Deputy Speaker of the Azerbaijani Parliament, Head of the Azerbaijan-Hungary Inter-parliamentary Friendship Group, who arrived from Baku to join the celebration of this special day, was asked to deliver his remarks: 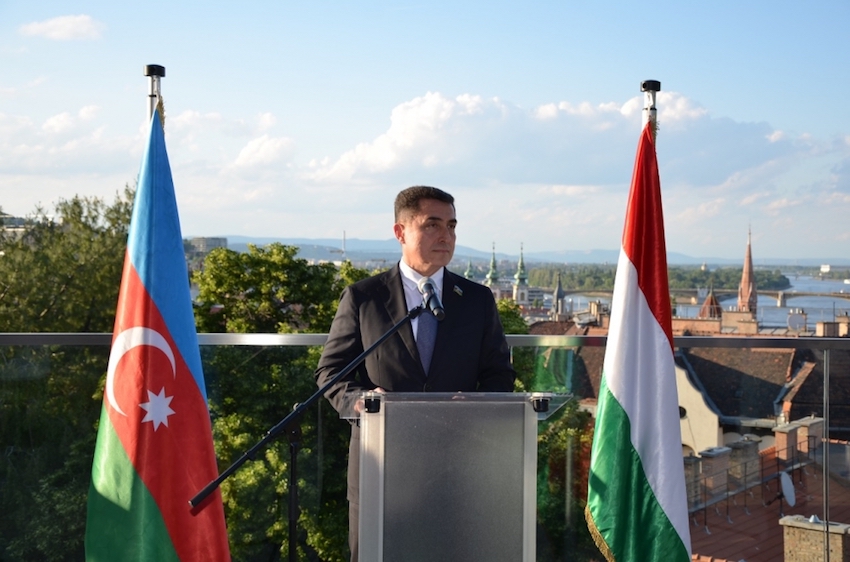 It is a great honour for me to join such an important meeting in my capacity as a group chair of the Inter-parliamentary Commission for Bilateral Cooperation between Azerbaijan and Hungary. I feel privileged to celebrate the Independence Day of the Republic of Azerbaijan with our Hungarian friends.

There were several periods of Azerbaijani independent statehood. First, the foundation of our state, which was declared to the world on 28th May 1918 as the first democratic state in the East. The Azerbaijan Democratic Republic, which has only existed for 23 months, has had a significant impact on the formation of democratic traditions in the Muslim East.

The second period was the period of strengthening of the Azerbaijani state within the Soviet Union. Although we had no political independence during the Soviet period, our nation was progressing social-economically and culturally. I would like to underline that this happened during the era of the chairmanship of Heydar Aliyev of Soviet Azerbaijan.

In the third period, Azerbaijan restored its independence as a result of the dissolution of the Soviet Union in the 1990s.

I would like to note that before the dissolution of the Soviet Union in 1990, our national leader Heydar Aliyev was the head of the Nakhchivan Autonomous Republic of Azerbaijan. He was the first person to change the Soviet flag to the Azerbaijani tricolour. It was a courageous move and the start of Azerbaijan’s independence.

In addition, the 90s were a tough period for Azerbaijan, the historical land of Azerbaijan Karabakh was occupied by Armenia, we had a major economic and social crisis, and we were on the verge of civil war. As soon as Heydar Aliyev was invited to our capital, Baku by the majority of Azerbaijanis, he became the President of independent Azerbaijan. He stopped the possible civil war, and declared a ceasefire in Karabakh. In 1995, under the leadership of Heydar Aliyev a new Constitution was approved and Azerbaijan became a democratic, legal and secular state. He created and strengthened democratic institutions, Azerbaijan became a member of the Council of Europe. He established the BTC pipeline that ensures Europe’s energy security today. Through these actions, Heydar Aliyev became the founder of modern independent Azerbaijan.

Additionally, both Azerbaijan and Hungary share many common values and support each other on international platforms. Hungary is an observer in the Organisation of Turkic States, of which Azerbaijan is a founding member.

I would like to emphasise that our bilateral relations have been further strengthened after Azerbaijan’s victory in the Patriotic War, under the command of the President of Azerbaijan Ilham Aliyev. We highly value the firm political support expressed by Hungary during the course of the Patriotic War for the restoration of internationally recognised territories of Azerbaijan. As a nation and as a state, we are very grateful for this open support.

As our President said: “If someone does us something good, we will always keep it in our hearts and will try to do everything to reciprocate”.

During the 44-day Patriotic War, the Azerbaijani Army managed to liberate the occupied territories and win the war.

I would like to finish my speech with the words of the national leader of Azerbaijan Heydar Aliyev: ‘Azerbaijan’s state independence is eternal, unshakable and irreversible’.

After the official part, the guests were kindly invited to taste the excellent gastronomic specialities offered by the hosts, while listening to the music of the Aypara folk ensemble performed on tar and kamanchaa and watching video films on historical monuments and sights, reflecting the image of modern Azerbaijan.

Source: Embassy of the Republic of Azerbaijan in Budapest