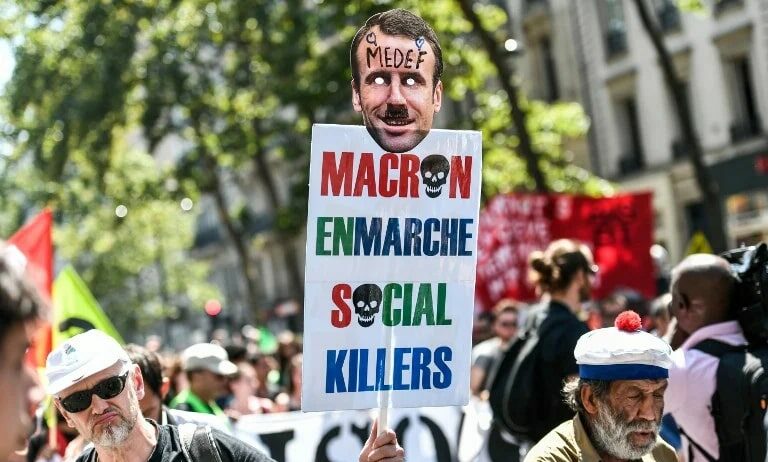 As stated in the document, “the President of the Republic will take this opportunity to highlight the role of Armenian organizations in France, reiterate his unwavering commitment to Armenia’s security and stability, and reaffirm France’s commitment to supporting the Armenian people.” Another curtsey to Yerevan, while France has failed to notice that Murad Papazian is said to have been denied entry to Yerevan not so long ago.

All fine and dandy, but the Élysée Palace is talking about “supporting the Armenian people” at a time when the people of France are not doing so well. For several days now, Paris has been engulfed in protests against the pension reforms. At least 80,000 people took to the streets of Paris. The police responded with batons and tear gas.

The confrontation is escalating; the unions have scheduled a new protest rally for January 31. The chances that voters will accept the pension reform with enthusiasm are non-existent. But it is hard to do without it: decades of “vote buying” with bloated welfare payments have resulted in the inevitable: the French budget simply cannot sustain welfare payments, especially now that military spending has to be increased as well. And this is not just a reaction to the Ukrainian war. France is being unceremoniously kicked out of its former colonial territories in Africa. The new military authorities in Burkina Faso have demanded that France withdraw its troops from the country within a month—French soldiers have been conducting operations against al-Qaeda and the Islamic State there. And similar things are happening in other places. France is rapidly losing influence in the Central African Republic, Mali… Paris is being pushed out of the states it considered its patrimony by Russia, through Wagner PMC. It is getting ridiculous: the portrait of a certain great German composer was seen at the anti-France rallies in Mali. Local “agents of influence” got their Wagners mixed up. It would seem that such a series of “kicks” and “pokes” should have forced France to mobilize, to make efforts to maintain its former influence… But, alas, Paris is instead reducing its military presence in Africa. This, of course, is a good illustration of Paris’s Napoleonic plans: the Élysée Palace may make plans of how it will secure its positions in the South Caucasus and flick Turkey and Russia on the nose at the same time, but in reality France is not even able to keep its “sphere of interest” in Africa.

Here we should ask Monsieur Macron: did he raise the issue of the activities of Wagner PMC at the talks in Armenia? Especially since Armenia was even slapped with European sanctions for its ties with the “Kremlin’s chef” Yevgeny Prigozhin: it was Yerevan that issued licenses to small airlines transporting weapons and mercenaries for Wagner PMC in Africa. But it seems that Paris did not dare ask unpleasant questions at least to its sister nation.

More importantly, Monsieur Macron seems so keen on serving the interests of Yerevan that he forgot that he is actually the President of France, not of Armenia. And, pardon the cynicism, the Armenian votes will not help him and his supporters much amidst the failures in both domestic and foreign policies.