Eldar Namazov: “Azerbaijan should create a ‘security belt’ along the entire border with Armenia.”

Azerbaijani positions are being shelled more or less regularly by the Armenian Armed Forces these days. In particular, the Armenian side opened fire on our soldiers in the village of Garalar, Tovuz District. And the military unit near the village of Aliagaly, Aghdam District, was fired at by illegal Armenian armed groups ensconced in the territory of Azerbaijan where Russian peacekeepers are temporarily deployed. One Azerbaijani soldier was wounded. Before that, the positions of the Azerbaijani army in the area of ​​the villages of Zeylik and Imambinasi in Kalbajar received fire. 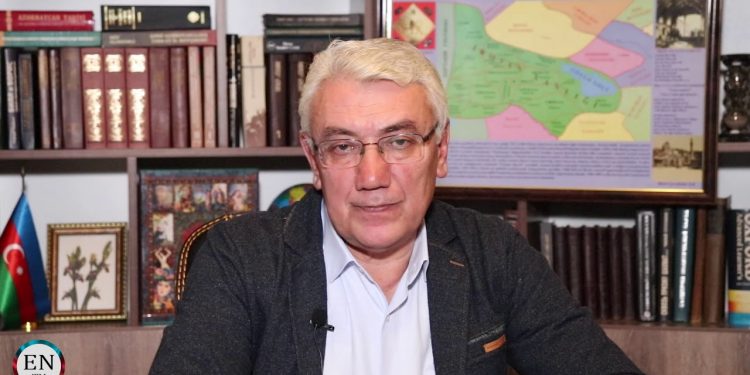 Eldar Namazov, Director of the Center for International and Strategic Studies, speaks on the possible response of the Azerbaijani side to Yerevan’s provocations.

There has been alarming news of Armenian provocations at the border lately. Our positions in Tovuz and Agdam were fired at. What is going on? Are we on the verge of a new military confrontation?

Provocations, shootouts at the border happen because Armenia has yet to make a final choice in favor of peace with Azerbaijan. The results of the early parliamentary elections, of course, do send certain positive messages in this regard. But do not give in to illusions—we are talking about the will of mere 25% of the voters in Armenia. besides, many votes were cast not so much for Nikol Pashinyan as against Robert Kocharyan, a representative of the old authorities and the Karabakh clan. With his huge anti-rating in public opinion, he was the most convenient opponent for Pashinyan. So, we should not forget that the current Armenian authorities have not officially renounced territorial claims against Azerbaijan, the Armenian side has not agreed either to set up a commission for demarcation and delimitation of borders, or to negotiate the peace treaty. Legislative acts and government resolutions based on territorial claims against Azerbaijan have not been revoked.

We could continue listing the available facts, but the above alone allows us to assess the situation unambiguously: Azerbaijan must always be ready to respond to any military provocation of Armenia’s. In fact, the President of Azerbaijan repeatedly warned the Armenian side about this, and not just in word: after the war, our country’s defense budget only increased, the manpower of the armed forces is also increasing, rearmament continues, taking into account the results of the second Karabakh war, the large-scale construction of communications, new military bases and border outposts is underway in the liberated territories and along the border. This gives grounds to say that our country’s leadership is very realistic about the ongoing processes and is taking adequate steps.

Armenia will have neither the military-technical, nor the economic, nor the demographic opportunity in the foreseeable future to build a potential that would make a new military challenge to Azerbaijan possible. But from the experience of previous years, we know that the ideas instilled in Armenians from childhood, in the family, at school—Turkophobia, territorial claims to Azerbaijani lands and clearly inflated, unrealistic ideas about their supposedly special “significance” in world geopolitics—constantly drive them to reckless ventures, occasionally at the instigation of a third party. Therefore, we must very carefully monitor the processes going on in the neighboring country and take timely preventive measures in order to be ready to protect our state borders and our civilian population in the border regions that are under fire again.

What kind of preventive measures do you mean?

As you know, throughout the entire Armenian-Azerbaijani conflict, the Armenian side purposefully used the concept of “security belt” in the media and diplomacy scene, implying 7 Azerbaijani districts around the mountainous part of Karabakh. Of course, the constant mentioning of this “security belt” was hypocritical and was intended to divert public attention and justify the fact of the occupation of Azerbaijani territories. After all, Azerbaijan never laid any territorial claims on Armenia, never tried to seize Armenian lands. It was Armenia that occupied our lands, and then presented some of those occupied lands as a “security belt”. So, today it is we who need to seriously think about creating a “security belt” along the border with Armenia.

Too many reasons have accumulated over the years for us to continue to ignore this subject. First of all, it is an internationally recognized fact that Armenia occupied territories of another state for a long time and refused to liberate them even in defiance of the demands of the UN Security Council. Second, the ideas of territorial claims against Azerbaijan are reflected in the Armenian constitution, legislative acts, government resolutions that Armenia does not seem intent on revoking. Third, Armenia refuses to recognize Azerbaijan’s borders and territorial integrity to this day. Finally, Armenia continues to shell our border areas and, as I said, the ideas of revanchism are still strong enough in this country and can drive it to new follies.

Therefore, in my opinion, Azerbaijan should be ready to introduce and establish a “security belt” if the processes in Armenia follow a dangerous scenario and there is a threat to our borders and population of the border regions. Since military attacks on Azerbaijan took place and are taking place not only in Karabakh, but along our entire border as well, as exemplified by the attacks on Tovuz in July 2020, as well as the fact that 7 villages in Qazakh District and the village of Kyarki in the Nakhchivan Autonomous Republic remain under occupation, a “security belt” is essential. It should cover the entire length of the Armenian-Azerbaijani border and the territory about 30 km deep into Armenia. Only in this way will we be able to keep our borders and residents of our border regions safe from Armenian artillery systems. By my estimation, the border of the “security belt” should pass along the line of the settlements of Alaverdi in the Qazakh section, Carvansaray (Ijevan), Dilijan, the middle line of Lake Goycha (Sevan), then through Girkhbulag (Akunk), Boyuk Vedi (in the Nakhchivan section) completely covering Western Zangezur because this wedge is narrow. You can see it on the map drawn by our Center.