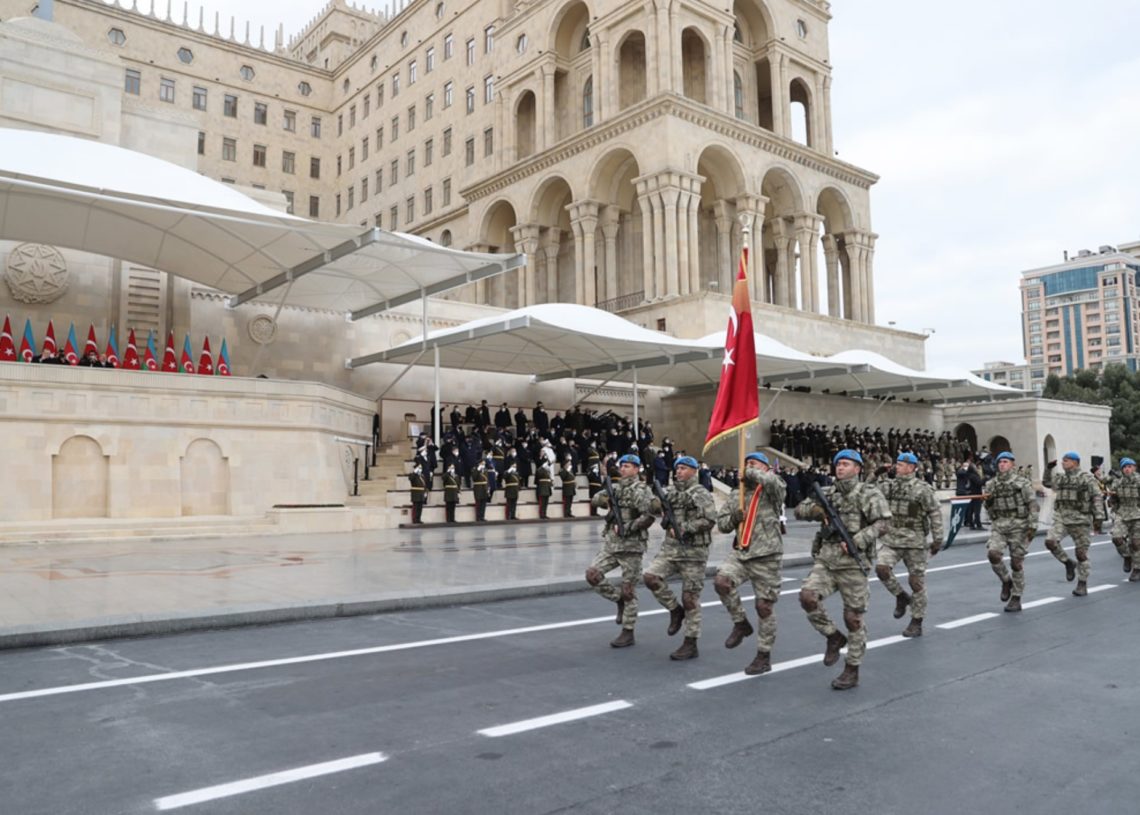 Turkish and Azeri Presidents hail troops in Baku in a military parade on December 2020.

The agreement, put into effect with the approval of President Recep Tayyip Erdoğan on April 6, 2021, would deepen already intensive military and defense cooperation between the countries. The move came against the backdrop of Turkey’s significant military help to its Caucasian ally against Armenia in a recent conflict with a supply of weapons, especially armed drones, and military advisors.

The agreement, a copy of which was obtained by Nordic Monitor, aims to solidify the Turkish military and defense industry’s reach to the Caucasus and boost its arms market. It also places already ongoing military and defense cooperation schemes within the official framework.

“Implementation of the results of development and production projects in the field of military equipment in the territory of the states of the Parties” was one of the objectives according to Article 4 of the agreement, laying the groundwork for the modern military hardware developed by Turkey’s growing defense and military industries to be tested on Azerbaijani soil.

Both countries are committed to providing “appropriate conditions for joint research, development, production and modernization of spare parts, tools, defense materials, military systems, technical displays and technical equipment required by the Armed Forces of the Parties,” the same article stated.

According to the text of the agreement, the mechanism focuses on improving defense industry capabilities through more effective cooperation in the fields of research, design, development, production and procurement, and maintenance of military and defense materiel as well as technical and logistical support, information sharing and research in the field.

The two countries also plan to sell jointly produced arms and defense goods to friendly third countries and to help those countries develop their own military and industry defense. For such a purpose, both sides agreed to encourage third countries to enter into agreements with Turkey and Azerbaijan.

The agreement reads like it was designed as a framework agreement as it permits new deals and cooperation in the military and defense industry in connection with the agreement. That means some of the agreements made by Turkey and Azerbaijan won’t be publicized but rather will be worked out as part of the existing agreement. On the Turkish side, at least, this would allow President Erdoğan to bypass review of any agreement by parliament, which has the constitutional authority to approve any international agreement.

It appears both countries were quick to exploit the agreement even before it became official with the Turkish Parliament’s approval. The fast-tracked deals that followed the agreement included the 2018 deal in which Aselsan, a subsidiary of the Turkish Armed Forces Foundation (TAFF), signed an agreement with its Azerbaijani counterpart on the joint production of communication facilities.

Similarly, Turkish Aerospace Industries (TAI), another TAFF subsidiary, inked a cooperation protocol with the Azerbaijan National Academy of Sciences (AMEA) in September 2018 to combine efforts in the fields of defense and aviation. The same year the Turkish Mechanical and Chemical Industry Company (MKEK) received a defense cooperation offer from Azerbaijan’s Ministry of Defense Industry.

Turkey’s Roketsan and Azerbaijani military-scientific enterprise Iglim have increased their cooperation in the joint work of developing a long-range missile system.

The cooperation between the Turkish and Azerbaijani armed forces has been intensifying since 2012, when a decision to that effect was adopted during an intergovernmental conference, the High Level Strategic Cooperation Council, which is chaired by Turkish President Recep Tayyip Erdoğan and Azerbaijani President Ilham Aliyev. In 2019 alone the two countries conducted 13 joint military exercises.

In another intergovernmental conference held in Baku on October 31, 2017, the 21-article defense industry cooperation agreement was signed. Azerbaijan rushed to approve the deal in February 2018. Although the agreement had not yet been approved in the Turkish Parliament, the effective cooperation started with the first meeting in Ankara in January 2019. Both sides hammered out the details of the cooperation including the training of Azerbaijani officers in Turkey.

By the end of 2019 nearly 18,000 Azerbaijani students had graduated from Turkish military schools, while another 8,174 troops received training in various courses and programs run by the Turkish military.

According to Article 7 of the framework agreement, the two sides will form a joint commission to implement the agreement and select projects to be carried out jointly. The joint commission will be responsible for the determination and definition of concrete fields of cooperation, the selection of joint projects, the exchange of information, the submission of proposals, recommendations and opinions to the relevant authorities, ensuring the preparation and publication of documents necessary for the realization of approved projects and decisions, the regular supervision of the project implementation and the assessment of the implementation.

The deal also sets forth conditions on the handling of classified information and documents produced or provided under the agreement, specifying how they shall be exchanged, used and protected. “Classified Information, Documents and Commercially Sensitive hardware and software will be transmitted between the Parties through government-to-government diplomatic channels or through other channels agreed by the Competent Security Authorities of the Parties,” Article 9 (10) states.

The terms of the agreement will be executed by the Defense Ministry on the Turkish side and the Ministry of Defense Industry for Azerbaijan. The deal is valid for five years with automatic renewal for successive periods of one year. According to the agreement, either party must notify the other of the intent to terminate at least three months in advance.

The defense industry cooperation agreement was submitted to parliament for ratification on October 4, 2019 by President Erdoğan and approved by the Foreign Affairs Committee on November 13, 2019. It was approved by the General Assembly on February 10, 2021 and signed into law by Erdoğan on April 5, 2021. The Official Gazette published the agreement the next day, making it part of Turkish law. 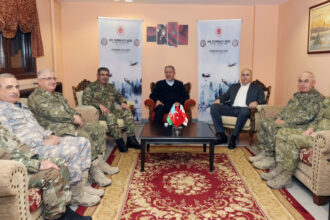