Last year, Selcuk Bayraktar helped swing conflicts in Libya and Azerbaijan, thousands of miles from his home in Turkey. 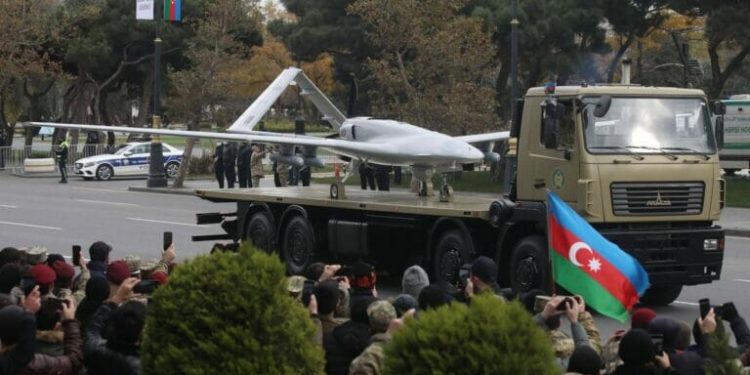 A former MIT research student married to the younger daughter of President Recep Tayyip Erdogan, Bayraktar has been central to Turkey’s emergence as a producer of armed drones. In 2020, his Baykar company’s TB2 unmanned planes were used with devastating effect by governments in Tripoli and Baku, both Turkish allies.

“Our air vehicles are admired all over the world,” Erdogan said in January. “Turkish armed UAVs are changing war methods, and changed the trend of the war in Libya.” He later seized on data showing seven Turkish defense companies among the world’s top 100, up from two in 2016.

Bayraktar, too, likes to wrap himself in the flag. When some Turks pointed out his privileged position and Baykar’s use of some imported parts, including engines, he tweeted that the drones are “not the groom’s” but the nation’s, and “will fly whether you want it or not!” The planes’ components, he said, are 93% made-in-Turkey. Baykar didn’t respond to an email seeking comment.

The intent is unmistakable, but so are the risks. Turkey’s interventionist foreign policy and whatever-it-takes pursuit of elite military technology could leave Ankara in a transactional no man’s land.

The U.S. sanctioned Turkey and locked it out of the Lockheed Martin Corp.’s F-35 jet program for buying a Russian missile system, a deal Turkey hoped would include the transfer of technology. U.K. and Canadian firms stopped supplying drone components once concerns were raised over how and where the planes were being used.Turkish engineers are striving to develop domestic engines for tanks, as well as the experimental TF-X fighter after delays to a deal with Britain’s Rolls-Royce, but it’s an expensive venture with no guarantee of early success.

“Turkey is fast becoming a market leader and emerging power in lethal drone technology,” said Raluca Csernatoni, a visiting scholar at Carnegie Europe. “This is part of a broader and ongoing effort to develop a self-sufficient defense industry and President Erdogan’s stated ambition to reduce Turkey’s dependency on foreign weapons systems. However, this is easier said than done,” she said, citing the Canadian decision to back away from cooperation.

Erdogan curbed the influence of generals in defense purchases, taking direct control of the procurement agency and aligning it with businesses close to government. The shift created jobs and boosted military exports, which topped $2 billion last year, led by armored vehicles and ships. In the drone market, Turkey remains a minor player compared to the U.S., China and Israel.

Over the last two decades, only the United Arab Emirates has surged further up the table of arms suppliers compiled by SIPRI, which researches global weapons expenditure. Turkey’s overall spending on defense equipment has risen sharply, but imports fell 59% from 2016 to 2020 compared to the preceding five-year period. That includes suspended F-35 deliveries.

It was the kind of operation that stirs pride in nationalist politicians and voters who’ve rallied behind the president.

They bitterly recall a U.S. arms embargo imposed after Turkey captured the northern third of Cyprus in 1974, as well as back-to-back decisions in 2015 by the U.S. and Germany to withdraw air defenses. The drawdowns, which came as Turkey and a U.S.-led coalition prepared for joint airstrikes against Islamic State, shocked Ankara which regarded them punishment for a crackdown on Kurdish separatists who had reacted to collapsing peace efforts with attacks.

In once friendly Western capitals, Turkey’s stock fell further as the war in Syria, migration, human rights, and the aftermath of a failed 2016 coup frayed ties.

Turkish leaders increasingly insist traditional allies no longer have the country’s back. The conviction’s behind attempts at defense cooperation with the likes of Russia and Pakistan, despite threats of U.S. sanctions that have periodically sent Turkish markets tumbling and contributed to a currency crisis in 2018.

Turkey has asked Moscow to sell Su-35 combat aircraft platforms so local engineers can install Turkish-made avionics; and sought to co-produce warplanes and missiles with Pakistan, a hookup that could also give Ankara access to prized war technology from China, according to people familiar with the discussions. Neither set of talks have been successful, they said.

South Korea stepped in this year to supply engines for Turkey’s Altay battle tank after political disputes scuppered plans to source them from Germany. But politics have been put aside for other deals: Middle East rival Saudi Arabia has reportedly bought Turkish drones, which are cheaper than their leading competitors.

Ankara says it wants to preserve established links to the West but disputes are piling up.

It’s exploring legal action to recover about $1.4 billion paid for the planned purchase of around 100 F-35s. And it’s picking fights with European Union members even while pursuing co-production of European-made air defenses.

An amphibious assault ship, the TCG Anadolu, is being turned into a carrier and added to Turkey’s flotilla in the Aegean and Mediterranean seas, where tensions run high over territorial rifts with Greece and Cyprus. It will be fitted out with helicopters, and up to 50 of the latest-generation Bayraktar TB3 drones, expected to be the first model that’s powered by Turkish-made engines.