The appeal was made by Vaqif Sadiqov, the Azerbaijan ambassador to the EU, who was speaking at an event designed to help promote good neighbourly relations in the often-troubled region. The diplomat was responding to some criticism of his country’s record on issues like press freedom. 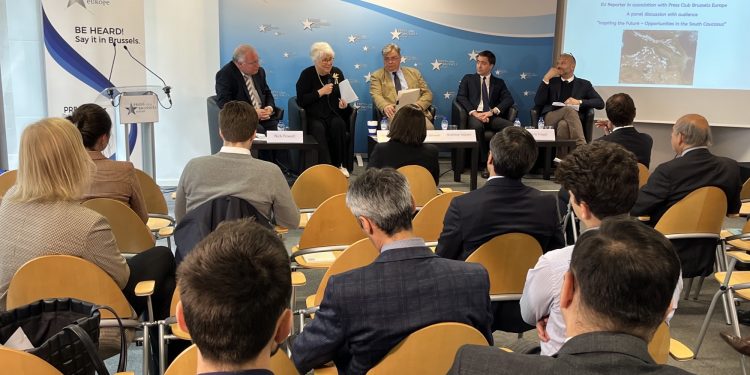 Estonian MEP Marina Kaljurand, a speaker at the event at Brussels Press Club, had raised some concerns about Azerbaijan, saying that in the Democracy Index 2021 Azerbaijan ranked 141st out  167 countries, with two other SK countries, Armenia ranking 89th and Georgia 91st.

She said that in the Corruption Perception Index 2021 by Transparency International Azerbaijan ranks 128th with Georgia 45th and Armenia 58th.

The MEP, who chairs the South Caucasus delegation in the Parliament, added that the recently published Press Freedom Index showed that Azerbaijan was placed 154th between Belarus and Russia.

However, Sadiqov, responding to these comments, made a robust defence of his country, saying, ”We can all use indexes for different countries and for different purposes but show me any EU country that has a 99per cent success rate  on anything.”

He also accused the EU’s approach to the region as one that is based on ideology and not reality.

“The EU has from as far back as 1992 failed to pay sufficient attention to the region and this is a structural mistake.”

He went on to say that this, more recently, had changed thanks to European council president Charles Michel “but success is not guaranteed.”

He told the event, “I applaud the efforts by Charles Michel but this also needs to be supported by the other EU institutions, in particular, the  Parliament  which is the one institution which should be supporting such efforts to bring peace to our region and by that I mean not just to Armenia and Azerbaijan.”

He said, “Since 1992 when one-fifth of my country was occupied we have paid more attention to our defence. That was a necessity and Azerbaijan will continue to produce defence equipment and also buy it from abroad but this will depend also on the situation in the region.”

Turning to the conflict in Ukraine, he said, “I think this will be a litmus test in terms of adherence to what is claimed to be done and what has actually been done. But I am not sure the cycle of violence we now see in Ukraine will not be repeated in our region.”

On Russia’s role in the region, another topic raised by several speakers, he said, “Azerbaijan has a wide range of relations with Russia, and we can boast to now have much more independence on our foreign policy than in the past.”

The South Caucasus is recognized by the European Union as a strategic region, and the three republics of Azerbaijan, Georgia and Armenia are all participants of the EU’s Eastern Partnership programme.

The 2 June debate, hosted by EU Reporter, focused on the policies pursued by Azerbaijan in its quest to build and promote good-neighbourly relations in the region in full respect for sovereignty, territorial integrity and independence within the internationally recognized borders of the states, which has been identified as an overarching commitment to defend the European security.

The former Estonia foreign minister, said, “This is close to my heart and this is a region that has been under pressure and turmoil and, yes, I also agree that the EU has not paid enough attention to the South Caucasus.”

“For years Georgia was our favourite, our darling, but it was a mistake not to have paid more attention to other countries in the region.

“We have learned our lessons though and while I admire the role of mediation played by the EU, future dialogue must be more focused, less polarised and more oriented.”

She said she looks forward to peace talks on the Nagorno-Karabakh issue and welcomed the “willingness” of the Azerbaijan parliament to facilitate this.

She added” You have to remember that, at same time, the Eastern Partnership is not the same policy for each and every nation. While trade deals are to be applauded they are often over estimated so things need to be improved a lot.”

Kaljurand told the meeting, “I do see positive signs in Azerbaijan and the EU’s growing role in South Caucasus but there is still a lot of room for improvement on things like trade, press freedom and human rights.”

She herself was asked about the objectivity of the Parliament and some MEPs and said, “I don’t agree Parliament’s resolutions are always biased as has been said today. Parliament has over 700 MEPs who represent their views and voters’ views but in their resolutions it always tries to find a compromise.” 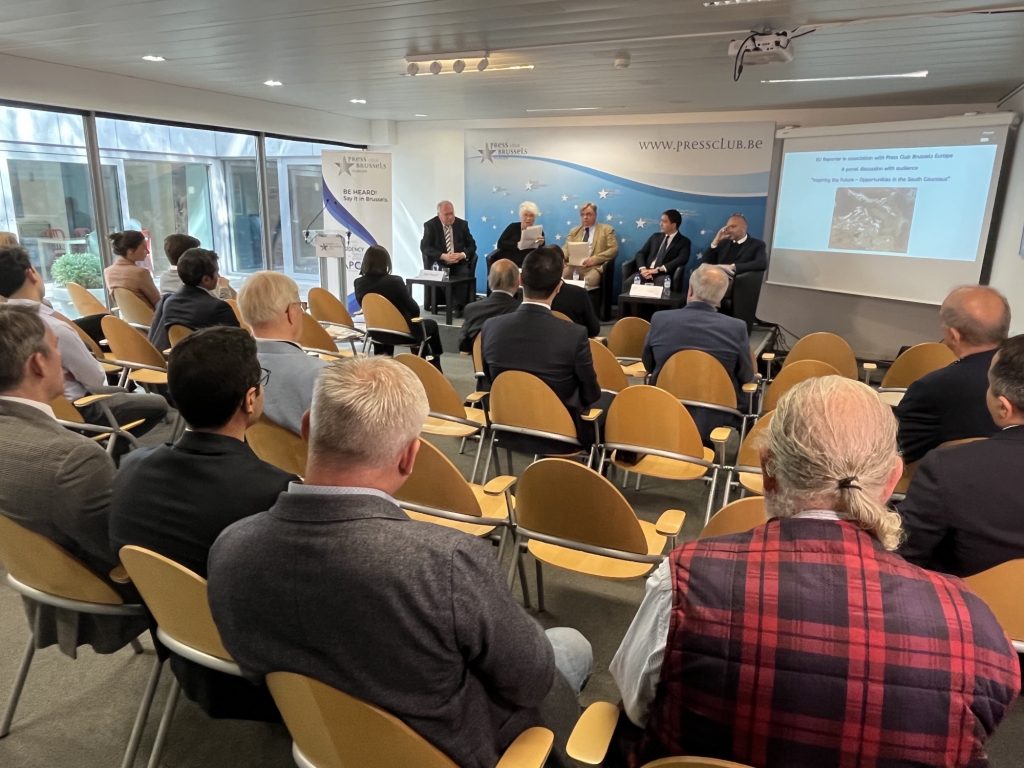 She was also accused of double standards in being overly critical of Azerbaijan but said, “Listen to what the EU is saying: Stop blaming each other and come together otherwise there will be no peace.

“Remember, not that many are interested in South Caucasus so listen to those who do care. But I am not biased to any one country.”

On Russia’s role in the region Kaljurand said, “It not up to us to dictate but for Azerbaijan and Armenia to decide. The ceasefire was negotiated by Russia but future talks should take account of the two sides. It is in their hands.”

She admitted, “But I am not too optimistic about the future role of the EU in the region. The EU is not as united as I would like it to be and do not see the determination of three months ago. I am not happy about this but I hope it will be successful because Azerbaijan has very good potential. But I repeat that we have to keep an eye on the bigger picture such as human rights.”

He said the South Caucasus states had become independent after the fall of the Soviet Union, adding, “Why? Because they didn’t want to be united with Russia and had not had a good experience with Russia.

“So the Eastern Partnership was established and its aim was to bring these eastern countries towards European culture and democracy. This was very attractive for them.”

“But of course, Russia did not and doesn’t want to lose these countries and now we see Ukraine war. If we want peace between these two countries you must do it without Russia. If you do it with Russia there will be no peace.”

On Russia, he added, “The shadow of Russia is above us and we see this every day. But we cannot exclude Russia but we should speak together without the presence of Russia.”

Shahmar Hajiyev, from the Centre of Analysis of International Relations in Azerbaijan, also addressed Russia, saying, “Russia plays an important role in Armenian society and its economy so we cannot ignore its role. Russian interests will also continue to play an important role in the region.”

Looking to the future, he said, “Energy projects can help establish good relations between all countries in the region. Azerbaijan is working closely with its central Asian partners on this but Armenia can also benefit from seeking a more sustainable peace between the two sides.”

Focusing on the Azerbaijan and Armenia conflict, he said, “We are now in the post-conflict period. We are going to establish peace in the region and work together on energy and infrastructure projects. But there are still challenges.

He added, “Armenia and Azerbaijan are neighbours and don’t want to fight to the end of their lives. The conflict has caused much destruction and that is why Azerbaijan will rebuild Karabakh.

“Under Russia mediation, there were no big achievements but under the EU mediation this year we have seen some positive developments and the two sides have agreed on some basic things. Another positive thing is the creation of a state commission to help bring about sustainable peace. This is a chance for the two sides to establish a sustainable peace so I hope both will use this opportunity. The two sides can also cooperate on land mines the main threat to human life in the region.”

Carlo Frappi, Associate Research Fellow for the Russia, Caucasus and Central Asia Centre at Italian Institute for International Political Studies, spoke of the importance of such discussions.

He said, “Events in the last 18 months have been a watershed for the region, the most important watershed since the early 1990s. Despite all the pessimism about the future of south Caucasus we now see concrete opportunities for change.

“What seemed a broken region, divided along fault lines and competing alliances, we now see a concrete possibility for inclusiveness and shared development. This should not be underestimated.”

He argued that the trigger for this was the 44-day war in 2020, adding, “It was, maybe, clear who was the winner and loser in this war but, to be positive, you could argue that there were two winners.

“Armenia, as well as Azerbaijan, also gained from the war – because it saw a route out of the dramatic situation which had lasted 30 years.”

A “security first” approach has been developed and Armenia now has the chance to “turn a page” on its post-Soviet era.

He said, “It seems to be ready to do this and this is critically important because it means Armenia is moving from isolation to inclusion. Also, as we have seen in Ukraine, the idea that Russia will not challenge the status quo is dead.”

The event, the first of a series of roundtables, was moderated by Nick Powell, Political Editor at EU Reporter.