From Bahrain to Azerbaijan, Iran is obsessed with ‘Zionist’ threats

As Israel successfully upgraded its relationship with Azerbaijan and Bahrain, Iran is trying to counter Israel's diplomatic success with threats to its neighbors. 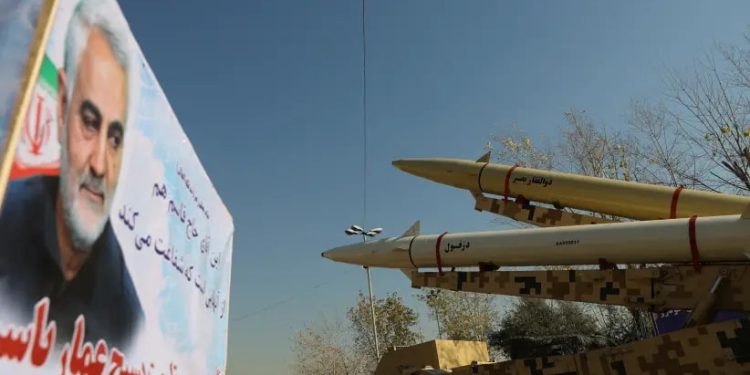 Missiles of the kind used during Iran's retaliatory strike on the U.S Ayn al-Asad military base in 2020 are seen on display at Imam Khomeini Grand Mosalla in Tehran, Iran January 7, 2022. (credit: MAJID ASGARIPOUR/WANA (WEST ASIA NEWS AGENCY) VIA REUTERS)

Iran has spent the last two decades trying to bring its forces to the borders of Israel. This desire was manifested by increasing support for Hamas, Hezbollah and also the Hashd al-Shaabi in Iraq. Now Iran is concerned about what it sees as a new threat; Tehran is worried about Israel’s role in the Gulf and also Israel-Azerbaijan relations.

In this context, Iran is increasingly concerned about Israel’s connections to Bahrain and Azerbaijan. It is important to Tehran because it reverses the usual role of Iran in the region, expanding its influence and attacking other countries by using proxies. Now it is Iran who is facing protests at home and is worried that countries closer to it.

It’s worth understanding this development in terms of Iran’s overall process of influence peddling and weapons trafficking to the region over the last two decades.

With Hezbollah, the Iranian connection goes back many decades, but it was in the wake of Israel’s withdrawal in 2000 that Iran and Hezbollah began to plan to increase tensions with Israel.

Hezbollah had a chance to put down its arms and work within Lebanon’s system. Instead, Hezbollah expanded its rocket and missile arsenal with Iranian support and began to threaten Israel, leading to the 2006 war. After the war, Hezbollah stockpiled another 100,000 missiles, moving them through Syria during the Syrian civil war.

Iran expanded its role in Syria during the civil war, specifically near Albukamal, Deir Ezzor, and other areas after 2017. Iran’s goal was to be able to create another front against Israel in Syria, using the Golan Heights area to increase tensions.

Iran moved ballistic missiles to Iraq in 2018 and 2019, seeking to threaten Israel through Iraq, and also moved drones to Iraq and Syria.

Israel has carried out a campaign between the wars to thwart Iran’s threats in Syria. Iran hasn’t remained quiet in the Gulf either, moving weapons to Yemen and threatening to ship in the Gulf of Oman, even seeking to expand its influence to the Red Sea.

Israel’s presence in the Caucasus and in the Gulf

Now Iran is worried about Israel’s role in the Caucasus and the Gulf. A report in Iran’s Fars News on Sunday included a long critique of Azerbaijan’s recent posture. The report says that Iran will not tolerate any Israeli presence in Azerbaijan near the border.

“The Islamic Republic of Iran will not tolerate the presence and activities of the Zionist regime against its national security and will take any necessary measures in this regard.”

Tehran is now urging Baku not to enable any foreign countries to influence its policy. This is a response to Azerbaijan’s close ties with Turkey and Israel.

“Azerbaijan has been sponsoring pro-Israel movements and even the direct presence of Zionism in the region for years. This country has forgotten that in the serious and historical crises of this region, it was Iran that supported the territorial integrity of this country and did not allow extra-regional powers to disrupt the strategic order of this region,” the report says.

At the same time, Iran’s Tasnim news reported on Bahrain on Sunday, quoting opposition activists and seeking to also highlight the “normalization with Zionists” in Bahrain. The overall trend of these two articles is designed to warn both Bahrain and Azerbaijan.

It is likely not a coincidence that Iran is also talking up new weapons, such as “hypersonic” missiles, in an attempt to strike fear into the region. Iran says its new missiles will soon be able to evade air defense systems, knowing that Israeli possesses some of the most advanced air defense systems in the region.

Iran also knows that it has tried to threaten Israel in the past with precision-guided munitions or PGMs. Therefore the context here is that Iran is seeking to send a message to Azerbaijan and Bahrain, which it sees now as frontline states, bordering Iran at sea and land on two flanks; the message is that Iran can also threaten the region.

For decades Iran sought to move its proxies closer to Israel. It helped Hamas and Hezbollah expand the range of their missiles. It moved drones to Yemen, Iraq, and Syria and also used drones from Iran to threaten Israel. Iran also moved missiles to Iraq and empowered militias to carve out an Iranian corridor of influence across Iraq and Syria to Lebanon.

Iran views the region like a chessboard and it is now lashing out in rhetoric because it believes Israel has been able to successfully make some countermoves. From Tehran’s perspective, the Israeli high-level visits to Bahrain and Azerbaijan represent major shifts in the region.

Iran knew that Bahrain and Azerbaijan had warm ties with Israel, but recent months have brought more rhetoric from Iran against Baku, Manama and also targeting Riyadh. This is the context of the rhetoric in Tehran.