From Molotov-Ribbentrop to Ryabkov-Sherman: Are the US and Russia dividing the world in two?

Right now, Russia and the US seem to be about to recreate the Molotov-Ribbentrop Pact, dividing up the post-Soviet (and not only) territory. 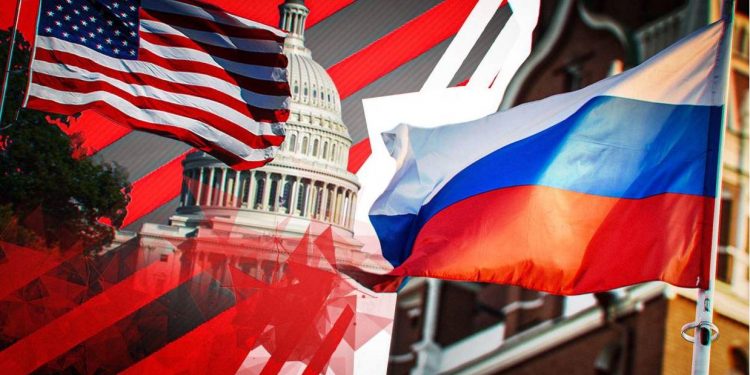 “You’re either with us, or against us.” The phrase, popular in Soviet Russia in the first years after the October coup, was used as a threat or warning to those who held a neutral political stance. The same phrase became famous in English-speaking countries thanks to US President Bush Jr., who used it in 2001 when declaring war on terrorism.

Yes, you’re either with us, or against us, for the powers that be leave no middle ground here. Strict neutrality? The only country that is allowed to have it is Switzerland as it keeps many a financial secret of the richest people of the world. All others, especially in the post-Soviet space, get an open ultimatum: you are either with the US or you are with Russia. Or an enemy of both, with all that implies. There is no in-between…

Why are we being so dark and negative right off the bat? Sadly, the current events don’t leave us much room for light and positive, let alone for unwarranted optimism. These events include the ongoing talks between Russia and the United States in Geneva. They may wrap it in propaganda all they want and call it “consultations of Russia and the West on security issues”, but it is clear as day that the main subject of the talks is NATO’s non-expansion to the East. That is, Russia and the United States will negotiate dividing up the East. Traditionally, after the breakup of the Warsaw Treaty Organization the Council for Mutual Economic Aid, the West regards everything east of Poland and Slovakia, that is, the post-Soviet territory, as the East. Whatever you call it—Russia’s concern about its borders, the desire of the United States to get as many new members into NATO as possible—the fact is what we have here is a bog-standard division of the world between Moscow and Washington into areas of influence. What we have here is a common case of the pleasures of the mighty being the tears of the poor. The mighty here are not the Poles or Ukrainians, but the USA and Russia, while the poor are the small states which Moscow and Washington divide among themselves, leaving them no choice.

I hate to exaggerate, but there are obvious parallels with the Molotov-Ribbentrop Pact. Although the treaty between Nazi Germany and the communist Soviet Union, signed on August 23, 1939, which shocked democratic countries, was presented as a non-aggression pact, the reality, or rather, the additional protocol to the document, surpassed expectations in its cynicism. As we know, this protocol stipulated a division of spheres of interests in Eastern Europe. The Baltic States (except Lithuania), the eastern part of Poland and part of Romania were included in the sphere of interests of the USSR to soon be occupied by it. Lithuania and the western part of Poland were assigned to the sphere of interest of Germany. Just a week later German troops invaded Poland, and World War II began.

Right now, Russia and the US seem to be about to recreate the Molotov-Ribbentrop Pact, dividing up the post-Soviet (and not only) territory. The deployment of CSTO troops to Kazakhstan falls within this logic; Moscow has taken the lead in the game here, in an efficient, albeit somewhat heavy-handed manner. Ukraine and Georgia, who had made a clear choice of their own in favor of the United States, were stripped of a significant part of their territories, which were annexed to Russia. And yet even after that these countries received no guarantee of security from the West, remaining in limbo to this day. Things are also ambiguous with other states that want to decide their own future, their own fate. President of Belarus Alexander Lukashenko has already announced that the mythical terrorists who attacked Kazakhstan have now set their sights on Uzbekistan. At the same time, Russian MP Leonid Kalashnikov made a statement that Uzbekistan should consider returning to the CSTO. Any comment here would be superfluous.

Azerbaijan, who chose a non-aligned status, has repeatedly declared at the highest official level that it seeks membership neither in NATO nor in the CSTO, preferring to build relationships with members of these military-political alliances on a bilateral basis. Many of the 120 member countries of the Non-Aligned Movement seem to think the same way.

The established formats for international cooperation and security are the UN on the global scale and the OSCE on the European scale. These are the two main platforms for discussing the global issues and challenges that all countries are currently facing. The low efficiency of these organizations is a separate and difficult issue, as is the need for reforming them. Still, they are collective mechanisms with their own systems of checks and balances governing the global security architecture.

By entering into negotiations on the division of the world space and keeping said negotiations off limits to all allies and partners, the two superpowers shamelessly bury both the UN and the Paris Charter for new states, pushing us back into the Cold War era, where small states are clearly not going to have an easy time.

In Russia’s case, all is crystal clear: the rigid vertical of power, imperial ambitions, and dreams of reviving the USSR. The worse things are in the socio-economic sphere, the more tales of a “fortress besieged by foes,” the more aggressive are the actions of the Russian authorities along the perimeter of the borders. All the more so in the regions Russia considers its areas of influence or soft underbelly. Consolidation of a hungry society requires sacrifices, and this role is generally assigned to the former Soviet republics.

But Russia is not dividing up the world with itself—it is dealing with the United States, the so-called beacon of democracy, which became the global policeman after Reagan. And while in the past the US used to act based on the carrot-and-stick principle, now Washington uses only the stick. If you are not with us, you will get the stick: sanctions, a color revolution, or even a straightforward military invasion. By the way, a remarkable detail about the policy of this beacon. Last December Biden organized a so-called Summit for Democracy, which was attended by 110 countries, one-third of which clearly do not meet the democratic criteria. Well, he who pays the piper calls the tune. At the summit, the US president gave a long and tedious speech about the need to strengthen democracy, protect human rights and freedom of the media. Yet today he is willing to divide the world with Russia. With Russia, which the US certainly does not consider democratic. Double standards? No, just the law of force.

Only two obvious choices remain for small countries here: joining the banners of either the United States or Russia. But there is a third option, the most difficult one, because it involves a path of resistance and active diplomacy. We should, despite the brewing storm in the post-Soviet space, do our best to retain our non-aligned status. President Ilham Aliyev has said it more than once: the non-aligned status is the most rational one for our country. In this regard, we have to further step up our efforts in the Non-Aligned Movement and in cooperation with our partners and allies on a bilateral basis.

The main objective of our country today is to mobilize internal and external resources to defend what our martyrs shed their blood for on January 20, 1990, in the First Karabakh War, in April 2016, in the 44-day war. We are a nation whose soldiers recovered the heart of our culture, the city of Shusha, in hand-to-hand combat, at a time when the whole world was telling us to just “forget about it”. The same goes for other small countries that want to preserve their sovereignty. After all, no one promised that the road to independence would be a walk in the park.