In the South Caucasus, one year after a costly war, a glimmer of hope for peace

In this joint op-ed, Dr Benyamin Poghosyan and Dr Anar Valiyev discuss how Armenia and Azerbaijan have coped with the changed realities of the last year following the end of the 44-day Karabakh War and the signing of the Armenia-Azerbaijan-Russia trilateral declaration of 10 November 2021. 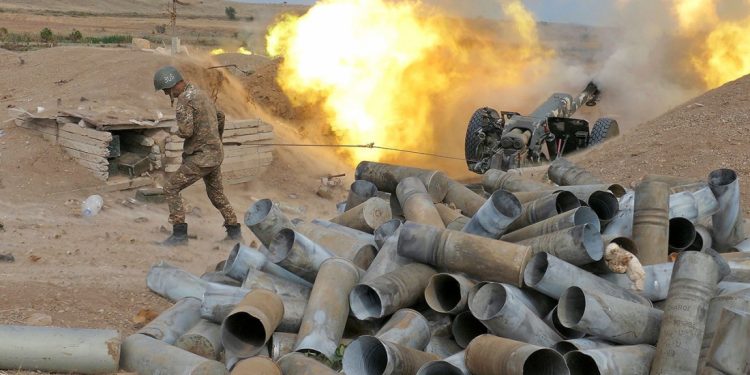 Poghosyan and Valiyev say that “the 44-day Karabakh War has redefined the South Caucasus, and it continues to do so. The heavy price paid by those who died should not be in vain. The opportunity for peace is now within the grasp of the people of the region. It will not be easy to achieve peace, nor is the risk of a spiral back to violence to be completely excluded. Which is why it is now time for cool heads, sober assessments, and careful but courageous steps, by the leaders, as well as by wider society.”

The 44-day Karabakh War which started on 27 September 2020 was a defining moment in the post-Soviet history of the South Caucasus. It came to an end in the early hours of 10 November with the signing of a trilateral statement between the leaders of Armenia, Azerbaijan and Russia. Thousands of soldiers were killed on both sides, and hundreds of civilians

Azerbaijan, its ally Turkey, and Russia have all gained or improved their position as a result of the war. The Armenian sides lost almost everything. Azerbaijan regained 75% of the territories it lost in the first Karabakh War, including 30% of the territories of the former Nagorno-Karabakh Autonomous Oblast that existed in the Azerbaijan SSR during Soviet times.

In Armenia there is still controversy as to what led to the war and the subsequent defeat. Many argue that what happened was the result of a Russian-Turkish-Azerbaijani understanding that emerged after the new Armenian government, which came to power in May 2018, rejected the Lavrov Plan and other options elaborated by the OSCE Minsk Group co-Chairs.

The trilateral declaration provides for the deployment of a Russian peacekeeping contingent of 1,960 troops, 90 armoured vehicles, and 360 motor vehicles, in Karabakh and along the Lachin corridor. Some 3,000 sq kms of territory of ex-Nagorno-Karabakh Autonomous Oblast is now under effective Russian “protection”.  Both sides watch Russian intentions closely.

The trilateral declaration put a halt to military conflict, but, as yet has not provided for peace and there have been a number of incidents, with some loss of life in the last year.

Various issues have kept tensions high. The issue of delimitation and demarcation of borders has resulted in constant tensions, given the absence of an agreed mechanism to do so. Armenia says Azerbaijani troops have encroached four kilometres into its territory, a claim Azerbaijan denies. Since the border is not properly defined, both sides claim they are right.

The fact that Azerbaijan still holds dozens of Armenian soldiers – the two sides differ on the exact number – is also a point of contention. Armenia considers them to be prisoners of war, and therefore bound to be returned as a result of the trilateral declaration, but Azerbaijan insists that as they were captured in a hostile posture after the cease fire came into effect they are not covered by the declaration. Some of these prisoners have now been returned, either in gestures of good will, or in a swap for maps of landmines of contaminated areas now back under Azerbaijani control.

The two countries are not yet on the same page when it comes to the post-war situation, but there are some positive signs that the process of aligning the position of the sides is proceeding.

A trilateral working group led by the deputy prime ministers of Armenia, Azerbaijan and Russia has held eight sessions, and there are unconfirmed reports of some progress, particularly as regards the restoration of railway links. Other issues appear to be more contentious, especially Azerbaijani demands for the creation of a “Zangezeur Corridor” that passes through Armenian territory to connect Nakhichevan with the rest of Azerbaijan.

There is also no clarity about the immediate endgame. Azerbaijan sees the conflict as having already been resolved and is asking for the next logical step which is the signing of a peace agreement recognising each other’s territorial integrity within their internationally recognised borders. Armenia on the other hand, insists on the resumption of the peace process led by the OSCE Minsk Group co-Chair countries – France, Russia and the United States, and on the basis of the previously agreed elements, including the final determination of the status of Nagorno-Karabakh through a legally binding expression of will. On this point the position of Azerbaijan has hardened as a result of the outcome of the war. It sees the future not in some kind of special status for Nagorno-Karabakh but in the comprehensive integration of the Armenian population of Nagorno-Karabakh into its wider society.

Ironically perhaps, the Karabakh conflict has gone through a full circle. The main contention again remains the future of the Armenian population of Nagorno-Karabakh.

Baku in the meantime has embarked on a massive reconstruction effort in the territories that have reverted back under its control. This includes turning Shusha (Armenian: Shushi) which Azerbaijanis regard as the historic capital of Karabakh into a showcase city – and Azerbaijan’s Cultural Capital. Given the strategic location of Shusha, overlooking as it does the main population area for Karabakh Armenians, Stepanakert (Azerbaijani: Khankendi), the Armenians continue to view the Azerbaijani control of the citadel with great trepidation.

The public positions of Baku and Yerevan on the future role of the international community also appears to be different, with both sides hoping the international community will engage to solidify its own position. However, behind the scenes both Baku and Yerevan appear interested in ensuring that the Russians do not monopolise the engagement with the ongoing processes. Baku is happy to see more Turkish involvement and welcomed with open arms the establishment of a joint Turkish-Russian monitoring centre in Aghdam, but in practice both Armenia and Azerbaijan are taking feelers to see how the larger international actors, such as the EU and the US, can also somehow be engaged. Given Russian resistance to this, both Baku and Yerevan are threading very slowly. It is necessary for the US and the EU to remain fully engaged in support of the long term peace in the South Caucasus through support for the process of building trust between the sides, as well as to allow for a process of dialogue and confidence building involving track 1.5 and track 2 players. One lesson that was learnt from the past failures of the peace process is the need to widen the buy-in from different segments of society.

The 44-day Karabakh War has re-defined the South Caucasus, and it continues to do so. The heavy price paid by those who died should not be in vain. The opportunity for peace is now within the grasp of the people of the region. It will not be easy to achieve peace, nor is the risk of a spiral back to violence to be completely excluded. Which is why it is now time for cool heads, sober assessments, and careful but courageous steps, by the leaders, as well as by wider society.

This is a joint op-ed prepared by Dr Benyamin Poghosyan, Chairman of the Centre for Political and Economic Strategic Studies of Armenia and Dr Anar Valiyev,  Associate Professor at ADA University, Azerbaijan. Dr Poghosyan and Dr Valiyev are members of a joint Armenia-Azerbaijan Liaison Group on confidence-building measures in support of peace in the South Caucasus, convened by LINKS Europe Foundation with the support of the European Union.