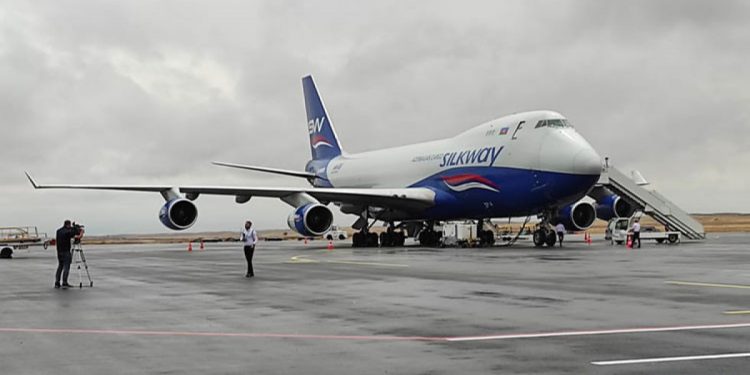 This is the first airport built by Azerbaijan in the areas retaken as a result of last year’s Second Karabakh War (September 27–November 9, 2020); and its construction took only eight months. President Erdoğan became the first foreign head of state to land at Fuzuli International Airport (Hurriyet Daily News, October 26).

Aliyev ceremonially laid the foundation for the airport on January 14, a few months after Fuzuli was freed from Armenian occupation (Azertag, January 15). Reportedly built in accordance with the highest international standards, the airport, which has an operational runway 3,000 meters long and 60 meters wide, is able to accommodate any type of aircraft, including large cargo planes (APA, October 16). The apron area of the airport is 60,000 square meters and is designed for the parking of up to eight aircraft at the same time. Its terminal can serve 200 passengers per hour.

Fuzuli Airport received international status on October 16, after the relevant order was signed by Azerbaijani Prime Minister Ali Asadov (Turan, October 16). The first test flight was performed a month earlier, on September 5, when the largest passenger aircraft operated by Azerbaijan Airlines (AZAL), an Airbus A340-500 named Karabakh, landed on the runway in Fuzuli. The flight from Baku took about 35 minutes, marking the first time that Azerbaijani cargo was delivered to Karabakh by air (APA, September 5).

The construction of the first airport of Karabakh in the capital of the Fuzuli district is related to the strategic importance of this region. The Fuzuli district is one of the 66 districts of Azerbaijan and is located in the southwest of the country, within the newly created Karabakh economic region. Most parts of the district, including Fuzuli city, were occupied by Armenian forces in 1993 and were liberated by the Azerbaijani military in October 2020 (Axar.az, October 20, 2020). During the occupation, lasting more than 27 years, the area was subject to systematic destruction and looting.

However, less than a year into the government’s “Restoration of Karabakh” program, substantial rebuilding work has already been carried out in the Fuzuli district. Foundations have been laid for the first new residential buildings and other critical infrastructure in the regional capital. After its complete restoration, Fuzuli will become the second-largest city in Karabakh: plans are for it to host a population of 50,000 and extend over an area of 1,936 hectares (Hurriyet.az, October 19).

Along with its economic and human potential, one of the main factors enhancing Fuzuli’s importance is the role that Fuzuli International Airport will play in transforming the city into Karabakh’s main entryway. With those plans in mind, the authorities declared Fuzuli city an “air gate” to Karabakh for goods and tourists arriving from other Azerbaijani regions as well as from foreign countries (Trend, August 29).

The other important factor that increases the significance of the Fuzuli Airport is its proximity and connectivity to the major roads that connect Karabakh with other nearby areas. One of the main new roads being built there, the Ahmadbeyli–Fuzuli–Shusha highway, will directly connect to the new airport (Azernews.az, January 7). In October, the foundation of a separate road, linking Fuzuli with Agdam, another big city in Karabakh, was also laid down (Regiontv, October 18). Additionally, construction work is underway on the Fuzuli–Hadrut and Fuzuli–Jabrail roads (Marja, October 17).

Most importantly, Azerbaijani authorities made plans for direct connections between the airport in Fuzuli and the Horadiz–Jabrayil–Zangilan–Agband highway as well as the Horadiz–Zangilan–Agband railway, both part of the ambitious Zangezur Corridor project that will connect the mainland of Azerbaijan with the Nakhchivan Autonomous Republic exclave and Turkey. The construction of these transit corridors is also underway (APA, October 26; Xalqqazeti, February 15).