The ability to profit from one's own misfortune is not a weak reflex among Armenians. This country succeeds despite the fact that not everyone can. 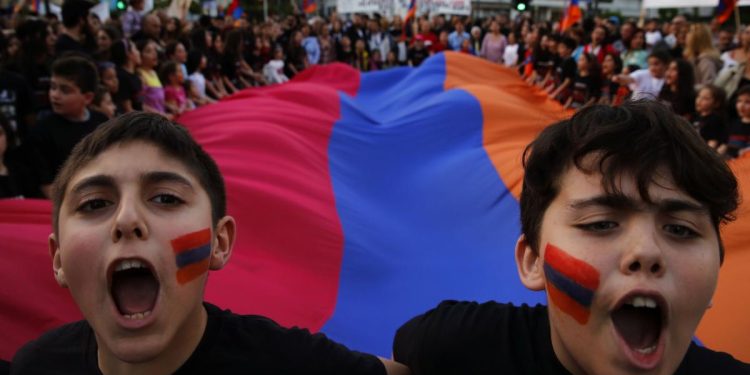 As a result, the European Union was so impressed that it decided to provide financial assistance to Armenians “injured” in the September clashes. We can only speculate on the logic of such selectivity. Then there’s vaudeville: Armenians are extremely dissatisfied, claiming that European benefactors gave them very little money, terribly little – what kind of stinginess is this…

The EU’s view of the various processes in the South Caucasus is sometimes amazing. So this time, it announced the allocation of about 118 million drams (300,000 euros) for emergency assistance to people “affected by the clashes in September, the deadliest since the ceasefire in November 2020”. At least, this is how the office of the European Delegation in Yerevan interprets it. According to the EU’s idea, the most vulnerable of the 7,600 people who “fled due to military operations, as well as their host communities and people who remain in conflict-affected areas, should receive this money next winter”.

Is this something serious? Is the EU exaggerating the magnitude of the disaster at the behest of the Armenians? The main issue isn’t even that – the very motivation of European functionaries is infuriating. Why not begin by compensating Azerbaijani civilians who are subjected to Armenian shelling on a daily basis? Or, more broadly, for the entire 30 years of agonizing occupation, atrocities committed by Armenian militants, and deprivation of refugee existence? Since when has money been given to the aggressor and provocateur who started armed provocations after the war ended, as it happened this September?

In an incomprehensible way, this tragedy of the Azerbaijani people has been forgotten, but the “troubles” of the Armenians are constantly the focus of the EU’s attention. [This can be seen as] some kind of hypocritical get-together encouraging the Armenian theatrical and political lobby’s clever tricks – if you shout louder that you are being killed, you can buy money for it. They won’t figure out who shot and who started it first, the main thing is to have a tinned throat.

The script for this performance, which includes an intermission and a climax, has been meticulously rehearsed. Despite the new freebie, the Armenians express their displeasure. Local media outlets are outraged at the size of the donation, which is “generally scanty, given the scale of the damage caused by Azerbaijani aggression”.

In general, the traditional Armenian whining has risen, which works as a technique, the essence of which can be described as “you also need to be able to be polite”. However, at the same time, they mockingly note that they do not look a gift horse in the teeth, especially when the EU has enough financial problems of its own, so I must say thank you… But the general chorus does not stop – they could have given more. And the arguments are unbreakable.

It turns out that it is the top priority of EU financial aid recipients in Armenia. As you are aware, the reform of the state apparatus and the implementation of economic programs in this country has long been based on European handouts. And complaining appears to be a sin for Armenians: according to their calculations, the total amount of assistance will be around 33 million euros in the form of EU grants, 10 million of which will go to the formation of the Armenian Interior Ministry, the reform of the patrol service, and migration policy. Isn’t that an inspiring fact? Moreover, if the money is partially given out in the form of grants, it is not a loan, and nothing needs to be repaid. So no, they think it will not be enough. They briskly and impudently measure the parameters of the “gift horse” and are outraged that “in fact, judging by the volume of assistance, the EU considers the creation of the Interior Ministry much more important than providing support to people affected by the Azerbaijani aggression”.

In general, the situation involves a freeloader who eats and drinks at his grandmother’s expense, and continues to take money from her pension for personal expenses, but is dissatisfied and scolds a gullible old woman. There is a desire to parasitize around the EU’s neck, shamelessly exaggerating the amount of damage caused (in this case by the “Azerbaijani occupiers”).

Instead of thanking for everything, Armenians start counting every penny of free funds, making eyes and grumbling, inflating the size of the “damage”, but they keep silent about the specific facts about the damage. Because there are none. So it is not worth specifying and concretising, later not to clap dish at the door of the wrong man. As one particularly clever Armenian author notes, “the Armenian government has not yet found the desire and time to calculate the damage caused by the last, September large-scale aggression by Azerbaijan. This is understandable, there are more important things to do”.

But at the same time, for some reason, Armenians are very good at thinking about how to make a big deal out of a molehill, yelling at every corner about the allegedly stolen livestock of large and small cattle. Here the numbers are growing day by day. Judging by the statements in this regard, cattle rustling by Azerbaijanis in general has turned into a national disaster in Armenia. According to the media of the “land of stones”, “during the last military aggression, the enemy stole 8,000 heads of small cattle belonging to residents of several villages from Ishkhanasar”. Such is the attack. Enlightened Europe should give up everything and run to look for the missing Armenian sheep and goats, which are certainly not recorded anywhere, existing only in the rich imagination of Armenian peasants. Why not replenish your village purse at the expense of rich Europe, really wealthy Europeans will count each lamb separately.

“And against this background, the EU allocates 300,000 euros to the victims and 10 million euros for the creation of the Interior Ministry…” the Armenians continue to whine, however, without worrying that the country’s national debt has reached $10 billion, increasing from year to year.

Few people care that Armenia only exists as a solvent entity because of Europe and its loans. In reality, it replaces old debts with new ones. And if the creditors decide to demand at least a portion of their funds from Armenia, throwing Armenians off the “financial needle”, the state’s phoney economy, which relies solely on loans and charity, will collapse like a house of cards.