How Russia spreads disinformation about the Second Karabakh War

With Ukraine the guinea pig for Russian information warfare, the Kremlin has spread dezinformatsiya to European countries and the United States with implications for modern warfare. 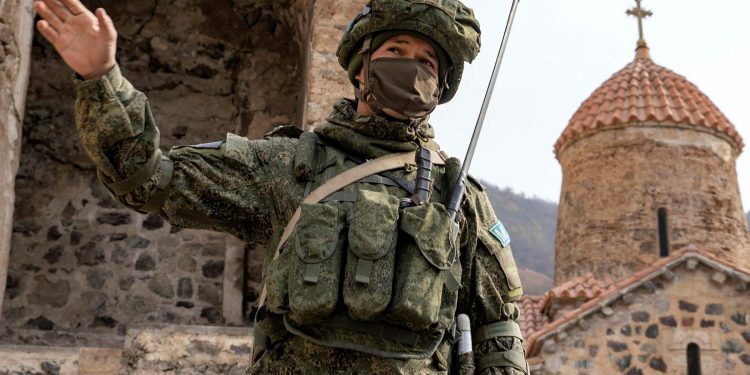 Azerbaijan has pursued a pro-Western multi-vector foreign policy balancing integration and cooperation with NATO and the pursuit of good relations with Russia. Baku’s relations with the Kremlin were, therefore, never as cold and brittle as those encountered by Georgia and Ukraine whose territories were invaded by Russia in 2008 and 2014 respectively.

Azerbaijan’s foreign policy was rewarded last year when Russia resisted intervening in defense of its proxy state and Armenia suffered a crushing defeat in the Second Karabakh War. Russia intervened only at the last minute by inserting itself as a “peacemaking” force in the separatist enclave in Karabakh. In Georgia and Ukraine, Russia invaded respectively to defend South Ossetian and Donbas separatists.

Nevertheless, Russia’s understanding of hybrid warfare includes the weaponization of information, a factor that was vividly seen ahead of its occupation of Crimea. With Ukraine the guinea pig for Russian information warfare, the Kremlin has spread dezinformatsiya to European countries and the United States with implications for modern warfare.

Russian great power nationalism has long viewed Ukraine as an “artificial state”; Putin first claimed this in the 2008 NATO summit in Bucharest. The Kremlin’s view of the non-Russian states of Eurasia as “artificial” denies them sovereignty and their independence in 1991 was an “accident.” Armenia and Azerbaijan are part of “historic Russia” and, therefore, within the Kremlin’s sphere of influence.

The second describes Azerbaijan as a puppet state of the West or “puppet client systems.” Pro-Western states in Eurasia are encouraged to become independent of the Kremlin’s sphere of influence as part of Western-inspired conspiracies to make Russia look weak by surrounding her with “unfriendly” states.

Related to this theme is dezinformatsiya about the West in the Second Karabakh War. Azerbaijan allegedly received “instructions” from Washington over how to conduct its policies towards Karabakh. The West wanted war in the South Caucasus and its intelligence services fomented the Second Karabakh War. The British pushed Turkey into supporting Azerbaijan as part of an age-old “Anglo-Saxon” struggle against Russia, repeating typical tropes from Russian Eurasianists who believe Russia and Western civilizations are in constant conflict.

The goal was to distract from Russian support for President Alexander Lukashenko, who was faced by Belarusian protests, and from military operations in Syria. Propaganda claims that the West does not like the presence of Russian “peacekeepers” and is intent on provoking Azerbaijan and Armenia into discrediting and breaking the ceasefire.

Russian dezinformatsiya shows the Jekyll and Hyde view of Turkey. On the one hand, the Kremlin sees it as advantageous to encourage a rebellious, dissident Turkey within NATO. On the other hand, Turkey’s growing influence in the South Caucasus and greater Middle East is viewed as a potential threat, which is reflected in dezinformatsiya claiming Turkey is the main beneficiary from Azerbaijan’s military victory.

Ukraine is allegedly offering to give Crimea to Turkey in return for Turkey providing the same kind of military assistance as it had given to Azerbaijan. Ukraine is warned Turkey has territorial claims on Crimea, which is rather odd as it is under occupation by Russia. Turkey and Ukraine are “at war” with Crimea’s residents. Russia’s xenophobia over this reflects the Kremlin’s concern at Ukrainian President Volodymyr Zelenskyy’s unveiling of a “Crimean Platform” initiative to lobby internationally against Russia’s occupation.

Russian dezinformatsiya is full of warnings that Ukraine is planning to use Turkish tactics and military equipment, which allegedly was the most significant factor in Azerbaijan’s victory, to attack pro-Russian separatists in the eastern Ukrainian region of the Donbas. With the Russian military buildup on Ukraine’s border in full swing, Russian dezinformatsiya is warning Kyiv is preparing a “Karabakh scenario” for the Donbas.

The third is a product of the first and second themes which denies the ability of countries with no sovereignty to win military victories. Russian dezinformatsiya is replete with claims foreign mercenaries—Chechens, ISIS, Ukrainians, Turkish—contributed to Azerbaijan’s military victory. Kyiv allegedly trained “militants” and “nationalists” for the Second Karabakh War. In a repeat of allegations made during the 2008 Georgian-Russian War, Ukrainian arms were allegedly sent to Azerbaijan. The most explosive falsehood in Russian dezinformatsiya is that the United States and Ukraine supplied chemical weapons to Azerbaijan, which  Zelenskyy dismissed as “fake news.”

The fourth is Russia’s intense dislike of color revolutions. These are viewed as fake popular uprisings engineered by British intelligence agencies, U.S. embassies, and the European Union to weaken Russian influence in Eurasia and distract it from Belarus, Syria, and elsewhere. Armenian Prime Minister Nikol Pashinyan is the “Armenian Navalny,” Russia dezinformatsiya says, showing how Russia remained suspicious of him after he came to power in 2018 in a color revolution. Armenia was defeated because the color revolution weakened the Armenian state.

Russia’s view of Pashinyan as a “Western puppet” is typical of the way it saw Ukrainian Presidents Viktor Yushchenko and Petro Poroshenko, Moldovan President Maia Sandu, and Georgian President Mikhail Saakashvili in a similar manner. Brought to power by Western conspiracies, they and Pashinyan were viewed as doing the bidding of Western geopolitical interests in Russia’s backyard. These are “geopolitical, geoeconomics, ideological and information struggles are carefully planned by US strategists and set in motion to liberate the post-Soviet space from Russia’s influence.”

With Russian dezinformatsiya alleging the United States spent one billion dollars on Armenia’s 2018 color revolution, it is, therefore, not surprising the Kremlin has always been cool towards Pashinyan. Russia’s distrust of Pashinyan may have assisted Azerbaijan’s victory by Russia withholding military support from Armenia in the hope he would be toppled.

The fifth is how Russia understands the West. The creation of an Eastern Partnership for former Soviet republics in 2010 transformed Russian geopolitical thinking into also viewing the European Union as a geopolitical rival. Over the last decade, the Kremlin has been perturbed by more than NATO. Russian dezinformatsiya views the Eastern Partnership as a means to weaken Russia by denying what the Kremlin demands to be recognized as its exclusive sphere of influence.

After Putin’s re-election in 2012, the Kremlin pressured Armenia and Ukraine to withdraw from the Eastern Partnership and join its alternative CIS Customs Union. Armenia withdrew from European integration and, together with Belarus, joined Putin’s pet project, the Eurasian Economic Union, as it was renamed in 2015. Only Russia can guarantee Armenian statehood, the Kremlin repeatedly says. Ukraine resisted in the bloody Euromaidan Revolution and together with Georgia, Azerbaijan, and Moldova stayed on course with European integration.

The last theme is rooted in historical Russian anti-Semitism. This is rather odd because anti-Semitism is absent from Azerbaijan and the country has a close strategic and military alliance with Israel.

Russia is allegedly the main target of “Jewish-Masonic globalist forces,” a conspiracy uniting the fake Protocols of the Elders of Zion from the late nineteenth century with Russian Black Hundred anti-Semitism and twenty-first-century leftist anti-globalists.

Hungarian Jewish oligarch and philanthropist George Soros is a traditional target of populist-nationalist anti-Semitism in Russia, Hungary, and Poland. The “Pro-Turkish” Soros is seeking to install his own president of the Nagorno-Karabakh separatist state and destroy Armenia, according to Russian dezinformatsiya.

Turkey and Azerbaijan are assisting the “world conquest” by these dark forces by implementing the program of “Jewish-Masonic forces” who are creating a “suffocating circle around Russia,” the main enemy of “Globalists.” These utterly bizarre claims are given extra spice by adding the pop singer Lady Gaga is the ally of “transnational centers” and “occultists-globalists” behind the Turkish-Azerbaijan War. They claim that Lady Gaga allegedly warned Armenians nine days before of the upcoming Second Karabakh War.

Russian dezinformatsiya is an outgrowth of Russian state policy in a country where the media is tightly controlled. These six themes are, therefore, reflective of the Kremlin’s view of Azerbaijan and Armenia, Eurasia more broadly, and the West. Russian dezinformatsiya shows how Russia is uncomfortable with Azerbaijan’s military victory and Turkey’s growing influence in the South Caucasus, two factors which Washington should use to its advantage by renewing its presence in the region.

Taras Kuzio, professor at the Department of Political Science, National University of Kyiv Mohyla Academy. His fourth book on the war, Russian Nationalism and the Russian-Ukrainian War is to be published by Routledge.