The shift of geopolitics currently happening in Eurasia has allowed a way for the Jewish state to improve its standing with nations belonging to the ethnic group, who could assist in efforts against Iran. 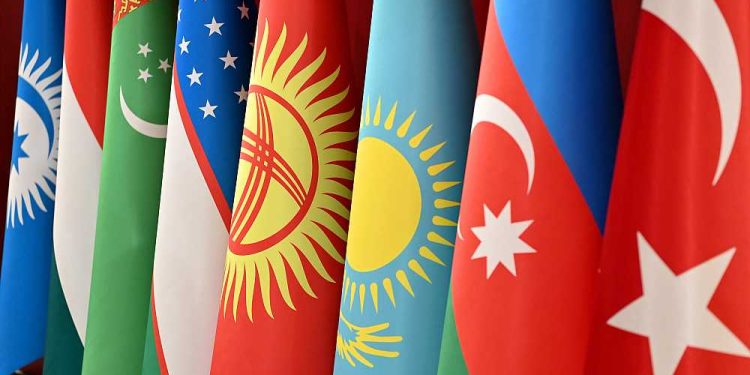 Since Russia invaded Ukraine, the world has witnessed major geopolitical transformations with new alliances being formed – one of which is the overlooked faction of post-Soviet countries with Turkic peoples.

The Turkic community – a large multi-ethnic group that inhabits areas from China to the Balkans – has always been spread out far and wide, with nearly 80 million in Azerbaijan, Kazakhstan, Uzbekistan, Kyrgyzstan, and Turkmenistan.

Never before, not even during the days of the Ottoman Empire, have they formed a lasting bloc.

But Russia, once the major power in central Asia and the Caucasus, lost much of its standing due to the humiliations it has suffered in Ukraine. So, the aforementioned Asian post-Soviet republics were left on their own and started to lean toward the Turkic world option.

This shift is of great importance to Israel as it changes the whole power balance of Eurasia, unlocking advantageous opportunities in many spheres. There are several reasons why – one is them is that former Soviet Turkic people are much less prone to Judeophobia than other Muslims.

These post-Soviet nations’ primary characteristic is their quest for a sense of national identity that started after the fall of the Soviet Union.

A similar process is happening today. Other regional powers are mostly looking to extend their influence over these former Soviet republics rich in minerals, oil, and gas.

While the Arab Muslim world, led by Saudi Arabia and Egypt, treats the Muslim states of central Asia and the Caucasus as second-rate – due to them being much more secular and not being Arab – it wants to get its hands on the region’s resources to profit without offering much in return.

Additionally, the Muslim world would take control of its political agenda, for example, voting in the United Nations.

China, a strong and stable power, also doesn’t like Muslims much – especially the Uyghurs, who are Turkic people – and would like to see resources of the central Asian republics mined and used in its own industries and economy, in the same way that Beijing has signed an agreement with Afghanistan for its mining rights immediately after the U.S. withdrawal.

In addition, there is the “Belt and Road Initiative” in which these countries are nothing but pit stops on the way to Western markets.

Iran is also eyeing these countries, especially oil- and gas-rich Azerbaijan – populated by Shiite Muslims, like Iran – and Kazakhstan, which is underpopulated and has vast uranium deposits (over 41 percent of the world’s supply).

Lastly, there is Turkey, which may not be as affluent as China or the Arab Gulf states, but it offers things that others cannot.

Turkey has cemented its status in recent years as a major geopolitical player with its operations in Syria and its military support to Azerbaijan, as well as its attempts to be a mediator between Ukraine and Russia.

Turkey can provide military security to the central Asian states and Azerbaijan, with which it already has brotherly ties and has supported militarily in its conflicts with Armenia, which is backed by Russia and Iran.

Being a state with a population of similar Turkic ethnicity as the aforementioned post-Soviet republics, Turkey needn’t exploit their natural resources as it is looking to establish an international platform and create a regional bloc that will ensure security, unity, and stability for the Turkic peoples. Unlike the historic Ottoman Empire, the Turkish gaze isn’t west for growth, but east.

Why is this beneficial for Israel? Because despite the fact that the idea belongs to Turkey’s President Recep Tayyip Erdogan, it’s Azerbaijani President Ilham Aliyev who will be the middleman.

Aliyev is part of the generation who still understands the Soviet mindset, which allows him to interact on an even playing field with the central Asian post-Soviet republics.

Baku’s 30-year-long standing alliance with Jerusalem benefits both countries greatly – Israel with energy resources and intelligence on Iran, and Azerbaijan with military technology.

In fact, it was due to Aliyev’s efforts that Turkey began a process of repairing and restoring its former relations with Israel which deteriorated during a split in 2011.

This warming-up and the gesture of returning mutual ambassadors in August 2022 signaled the start of a new chapter in Israeli-Turkish relations, specifically after the meeting between Israeli Prime Minister Yair Lapid and Erdogan during the UN General Assembly in September 2022 and Israeli Defense Minister Gantz’ visit to Turkey in October 2022.

If Baku managed to reconcile Ankara and Jerusalem, it should be easy to promote relations with central Asian Turkic countries, which are already pretty friendly. It’s a huge market for Israeli hi-tech which would be welcomed with open arms as a chance to grow the local industry and economy.

Not to forget, the idea of a Turkic power bloc is a major threat to Iran, as it forms a crescent from the northwest of Iran to its northeast.

Assembling a Turkic power in Eurasia is of top priority to Azerbaijan, as it, like Israel, is a pronounced opponent of Iran and has even been directly threatened with military action by Tehran when the latter conducted two large-scale military exercises on their shared border while also trying to incite Azerbaijani minorities.

Recently, a group of Iranian agents was arrested in Azerbaijan and one of them turned out to be an accomplice in the attempt to kill Israelis in Cyprus last year.

In a joint effort with the Arab Gulf states headed by Saudi Arabia, the Turkic confederation would encircle Iran almost entirely, thus limiting the destructive influence the Ayatollahs have on the Middle East and forming a united front against Iranian aggression.

The Turkic bloc covers the northwest through the northeast of Iran while the Gulf states cover the southwest. Not to forget that at the back of all those opposing Iran stands Israel, which can and is currently supplying many of Tehran’s adversaries with advanced military technologies.

Besides, most of northern Iran is populated by Azerbaijanis – over 20 million Turkic people, who are the major power in the current protests and seek independence in the territory called southern Azerbaijan. The creation of a Turkic bloc may turn their desire into a reality, thus dealing a devastating blow to Iran’s regime.