Ilham Aliyev received calls from everywhere, from America to Europe, over gas in Khankendi

"In the territory of Karabakh, where Armenians now live, the gas pipeline malfunctioned and there was no gas there for some time. The whole world started screaming that Azerbaijan had unleashed a humanitarian crisis there." 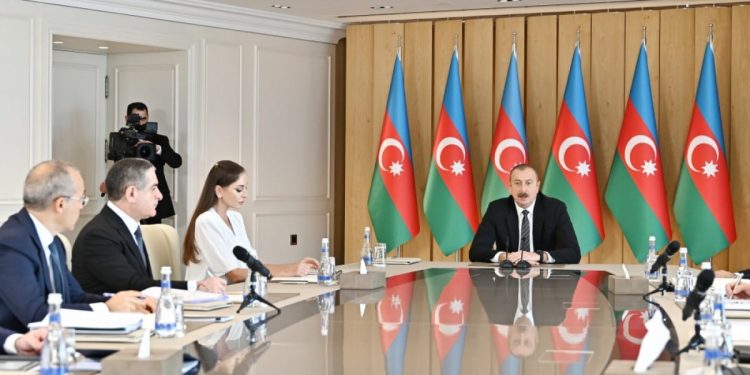 “In the territory of Karabakh, where Armenians now live, the gas pipeline malfunctioned and there was no gas there for some time. The whole world started screaming that Azerbaijan had unleashed a humanitarian crisis there. But they deprived Nakhichevan of gas for 15 years. Winters in Nakhchivan are even harsher, with temperatures reaching 30 degrees below zero. From 1990 to 2005, the people of Nakhchivan lived without gas. Who left them without gas? Armenians, the leadership of Armenia, the state of Armenia,” President of Azerbaijan Ilham Aliyev said at the meeting devoted to the results of the first quarter of this year on April 12.

“Did a single person, organization, or state raise its voice then? No, they remained indifferent! But when there was no gas in Khankendi for a week, there wasn’t a person who didn’t call us, from America to Europe. First of all, there are countries in Europe itself that have no gas. They simply have not been gasified. There are countries where the gasification rate barely reaches 3-5%. Is there a humanitarian crisis there? The Armenians were left without gas for just a week, and a humanitarian crisis broke out right away? Then why wasn’t Nakhchivan’s 15 years without gas treated as a humanitarian crisis? Is there an answer to this question? There is: discrimination and double standards!

“We have restored the gas supply, and the Armenians should appreciate that. We just showed our good intentions. If we had not wanted to, we would not have restored the gas supply. Who would have said anything to us? Was it our obligation to restore the gas supply? It was not. But we did and, hopefully, they will realize that they are citizens of Azerbaijan, they must and will live under the Azerbaijani flag. The sooner they understand this, the better for them. We have demonstrated our humanity. But we will not forget how Nakhchivan was left without gas. In 2005 we laid a gas line from Iran to Nakhchivan based on an agreement with Iran. We laid a gas line to Iran’s Astara and we are carrying out swap operations. Nakhchivan has been getting gas this way since then,” the President said.