Azerbaijani President Ilham Aliyev announced earlier this year that a number of large infrastructure projects had been launched in the territories liberated from Armenian occupation as a result of the 2020 Second Karabakh War. 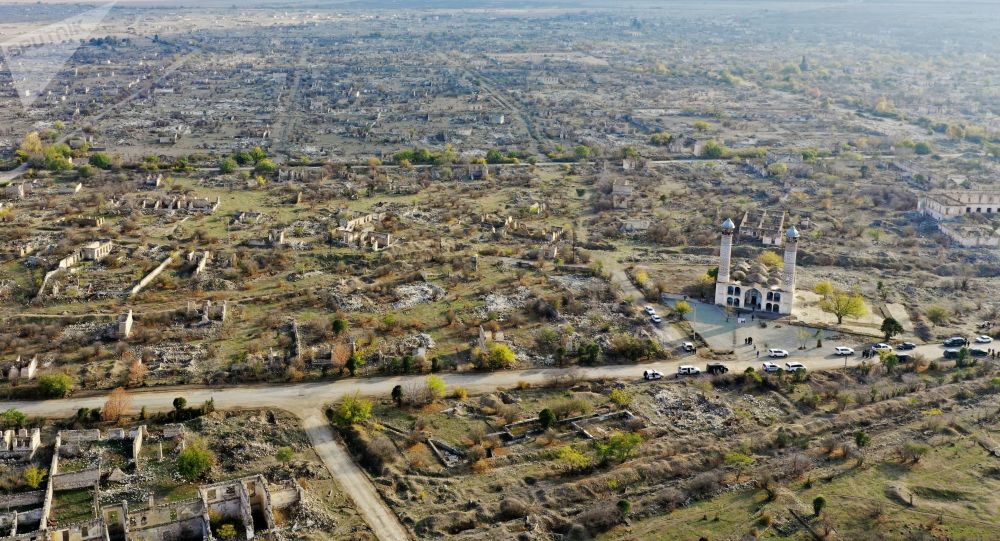 Importantly, he added that friendly countries and partners would be involved in these projects (Report.az, February 15).

When it comes to attracting foreign assistance in restoring and rehabilitating these regained southwestern areas of the country, Azerbaijan will prioritize its closest ally, Turkey, and Turkish businesses. Companies eager to participate in these projects have already submitted several proposals, according to Azerbaijan’s Economy Minister Mikayil Jabbarov (Trend, April 2). Another strategic partner invited to take part in reconstruction projects is apparently Belarus, whose president, Alyaksandr Lukashenka, visited Baku earlier this month to, in part, discuss the possibility of such participation by Belarusian firms (see EDM, April 20)

Iranian Foreign Minister Mohammad Javad Zarif met with Aliyev on January 25, 2021, and stated that Iran was ready and eager to engage actively in the reconstruction process. As President Aliyev had confirmed that the liberated territories will be a green energy zone, Iran and Azerbaijan reached an agreement in the area of renewable energy for the installation of the Khudaferin and Maiden Tower hydro junctions. Hydroelectric power plants, in particular, have tremendous potential in this region of Azerbaijan (Azertag.az, February 15).

Due to Italy’s Baku-friendly position during the Second Karabakh War, Italian-Azerbaijani relations have further improved. In this regard, the two countries are actively discussing possibilities of extending cooperation in multiple fields, including involving the Italian government and business entities in urban planning, renovation, and rebuilding of Karabakh’s rich historical and architectural heritage (Trend, February 23). On February 3, Aliyev received, via video conference, a delegation of the Milan-based engineering company Maire Tecnimont Group, which has been operating in Azerbaijan for more than seven years. This Italian corporation is reportedly interested in new local initiatives (Azertag.az, February 6). Among the most crucial undertakings will be rebuilding and expanding energy supply facilities and grids in the regained territories in and around Karabakh. The Azerbaijani joint stock company AzerEnerji has already extended power lines to the town of Shusha (Trend, February 15); but a significant contract for building the electricity grid in the liberated areas was notably awarded last month to the prominent Italian energy firm Ansaldo Energia (Trend, March 23).

Azerbaijan is pursuing a pragmatic strategy, working both with countries in the region and around the world on mutually beneficial terms (Azertag.az, January 22). In this regard, Hungarian companies are also set to take an active part in reconstruction work in the Karabakh region. And Hungary’s EximBank has already allocated $100 million to Hungarian companies involved in such projects in the liberated Azerbaijani territories. At the same time, Budapest allocated funds to demining operations in the war-torn areas (Trend, March 10). Japan is yet another distant country to assist in rebuilding and development. According Ambassador Junichi Wada, the Japanese government’s financial assistance has supported the drilling of artesian wells in the Azerbaijani villages of Hindiristan and Chullu. Romania is likewise closely following the process of restoring the economic basis of the formerly occupied territories (Trend.az, April 5).

Other key foreign states have expressed interest as well. On January 27, 2021, while Azerbaijan’s Economy Minister Jabbarov spoke with the United States’ ambassador to Baku, Earle Litzenberger, the diplomat noted that US entities are also willing to help with the reconstruction of the liberated territories, particularly in the areas of water resource management, road and other infrastructure, and digital and advanced technology cooperation (Economy.gov.az, January 31). That same day, the French foreign ministry’s Minister of State Jean-Baptiste Lemoyne noted that significant, internationally recognized French companies are already represented in Azerbaijan, asserting that no obstacles exist to these firms undertaking various reconstruction projects in the liberated Azerbaijani lands (Azernews.az, January 27).

While the wider global economy gradually emerges from the recession caused by the COVID-19 pandemic, Azerbaijan aims to not only rebuild and develop the regions freed from decades-long occupation but also to carry out President Aliyev’s direct instructions to implement “smart city” and “smart village” concepts in these areas. Government plans are thus underway for the portions of Karabakh and the surrounding territories back under Baku’s control to be transformed into a “green energy” zone. Regardless of the fact that all of the formerly occupied region’s hydroelectric plants sustained damage or neglect since the early 1990s, the Azerbaijani authorities have already carried out early surveys of the overall infrastructure. The first “smart village” project is now underway in the devastated village of Aghali, in the Zangilan district, having been launched on February 14, 2021, during Aliyev’s and First Lady Mehriban Aliyeva’s visit to the recaptured Fuzuli, Zangilan, Lachin and Jabrayil districts (President.az, February 14). Housing, manufacturing, social services, “smart agriculture” and renewable energy are among the five key components of the “smart village” approach to development. Only renewable energy sources will be used to meet the energy needs of the 200 local homes that will be constructed. A hydroelectric power station has been built quickly in the destroyed and looted village of Gulabird. This is the first power plant to be constructed in the liberated lands, and more are on track to be built soon (Report.az, February 15).

Furthermore, regional transportation projects have a unique role to play in the region’s long-term progress, ensuring stability as well as dampening the chances of renewed war in the future (see EDM, April 5, 13, 21). The most important new transportation corridors currently under discussion include rebuilding a railway link between Armenia and Iran via Nakhchivan, as well as a railway link between Turkey and Azerbaijan, via Nakhchivan and southern Armenia. A railway line connecting Russia and Armenia may also be opened across mainland Azerbaijani territory (Trend, February 15). The improvement of transportation infrastructure in the South Caucasus will certainly contribute to higher economic growth. But just as importantly, such cooperation formats can help build stronger and more positive ties between the peoples of Armenia and Azerbaijan—as well as with and among the peoples of neighboring countries in the region.