From 2016–2020, Israel accounted for 69 percent of Azerbaijan’s major arms imports — a number that represents 17 percent of Israel’s arms exports for that same period. 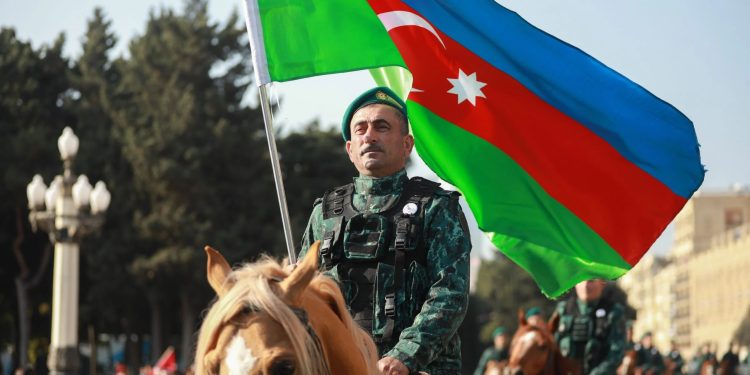 Azeri service members ride horses during a procession marking the anniversary of the end of the 2020 military conflict over Karabakh breakaway region on November 8, 2021 in Baku, Azerbaijan. (Aziz Karimov/Getty Images)

With all signs indicating a new Iran nuclear deal is in the offing, Israel is looking for new ways to challenge Tehran — including tightening defense ties with Azerbaijan, Iran’s northern neighbor.

While there are still efforts underway from Jerusalem to stop a new nuclear deal from being consummated, including a visit this week from Israeli Mossad chief David Barnea to DC, there is little hope among the Israeli government that these last-minute attempts will be fruitful.

Barnea’s message will not be a surprise after he bluntly called a potential new agreement a “strategic disaster” for Israel last week. The Israeli press reported that Barnea received behind-the-scenes blowback from his phrasing, which may be an accurate representation of Jerusalem’s views was not in line with the low-profile exchange of messages from Israeli Prime Minister Yair Lapid and defense minister Benny Gantz to Washington.

Regardless, Israel is preparing its options. Last week, for instance, there were reports that an Israeli air force F-35 flew in the Iranian airspace, likely to evaluate the Iranian early warning systems. But there are less direct options Israel is looking at, which is where Azerbaijan enters the picture.

Sharing a roughly 420 mile-long border with Iran, the two countries have had an up-and-down relationship over the years. Now Jerusalem is hoping to utilize hidden tensions between Baku and Tehran for its own purposes.

Officially the Israeli defense establishment is not commenting on the way Azerbaijan may help Israel in a future conflict with Iran. “This is a very sensitive issue, and we better shut up” one defense source told Breaking Defense. A tied-in, former Israeli defense figure that talked with Breaking Defense on condition of anonymity said that the importance of the close defense relations between Israel and Azerbaijan is “at the highest level,” but would not go into more specifics.

Despite the close-hold nature of the discussions, it is clear that tight defense relations with Azerbaijan offers Israel some potential benefits, including the deployment of sensors on Azeri soil or using its long border with Iran to enable better penetration of special units into Iran. Azerbaijan could also, in theory, offer up its airspace for Israeli jets to enter Iranian territory if needed.

Among the systems currently in use by Azerbaijan are loitering munitions that were visibly successful during the 2020 Karabach war between Azerbaijan and Armenia. In 2018 the Azeris acquired the Elbit systems SkyStriker loitering weapon system; the Israeli company refused to comment on the contract at the time. The Aziris have also purchased in the past another loitering weapon system, the Harop, made by Israel Aerospace Industries (IAI). It also purchased IAI’s Lora, a long-range surface-to-surface precision missile.

But the ties go deeper than simply an industrial client relationship. Despite being a majority Shiʿa Muslim country, Azerbaijan has a long-standing Jewish community without major documented conflicts between the two sides, according to research prepared by Rusif Huseynov, the director of Azerbaijan’s Topchubashov Center, and published on the website of the Moshe Dayan Center for Middle Eastern and African studies.

In fact, Huseynov writes, when Azerbaijan declared victory over Armenia in Nov. 2020, Israeli flags were seen among the chanting crowds. In turn, Israel now relies on Azerbaijan heavily for petroleum imports. And both nations, he writes, are vulnerable to Iran’s missile program.

“Although Baku usually states that Azerbaijani-Israeli partnership is not built against a third party, the Islamic Republic of Iran feels both uncomfortable and vulnerable,” Huseynov writes. “It is also psychologically difficult for the Tehran regime to accept the fact that a Shiʿa-majority nation cultivates excellent relations with a Jewish state. Therefore, the threats against Azerbaijan from the top Iranian authorities have been quite common since the mid-1990s.

“Most recently, in September 2021, the Iranian side assembled thousands of soldiers along the Azerbaijan border and staged a large military drill. The threat generated an immediate reaction of Baku. President Ilham Aliyev sent his message to Tehran by gently caressing the Israel-made Harop kamikaze drone in front of cameras.”

The Iranians are aware of the close relations between Azerbaijan and Israel and, at various points, have made it clear Tehran is paying attention. In a recent interview published by the Tehran Times, Iran’s ambassador to the Republic of Azerbaijan raised some of Iran’s concerns.

“We suspect they [Israel] must have special intelligence, security and maybe an intention to do an act of sabotage behind what they are doing, which is under our monitoring. We made the necessary complaints and gave the necessary warnings to the Azeris, and the officials of the Republic of Azerbaijan at different levels have assured us that nothing against the national interests of the Islamic Republic of Iran will happen from the territory of the Republic of Azerbaijan.”