According to Zakharova, Russia acts as a mediator, and this work yields concrete results, which are appreciated both in Baku and Yerevan. 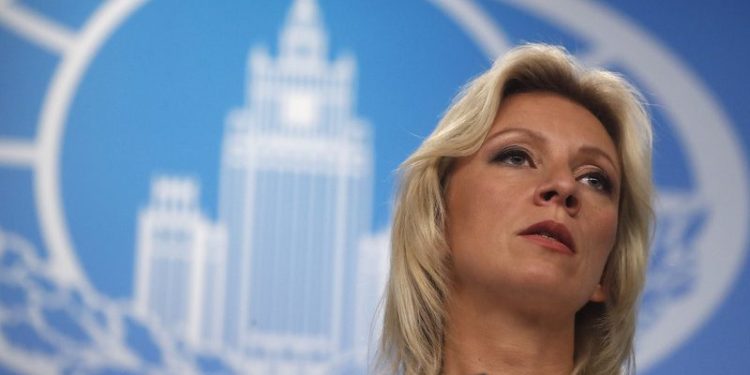 Russia has once again opposed the EU mediation in achieving final peace between Azerbaijan and Armenia. In the run-up to the meeting between President of Azerbaijan Ilham Aliyev and Armenian Prime Minister Nikol Pashinyan brokered by President of the European Council Charles Michel, Russian Foreign Ministry spokesperson Maria Zakharova called Brussels’ peacekeeping efforts a “pseudo-initiative”.

You will recall that the new round of talks between Aliyev and Pashinyan in Brussels comes after the second meeting of the governmental commissions on the delimitation of the border between Azerbaijan and Armenia, held in Moscow the day before.

The meeting of the border commissions, headed by Deputy Prime Ministers of the two countries Mher Grigoryan and Shahin Mustafayev, reportedly discussed “organizational and technical issues”. Armenian media outlets add that the third meeting of the commissions will take place in Brussels next month.

However, Moscow has made it clear that it is against Brussels’ mediation, both in reaching a final peace deal between Azerbaijan and Armenia, and in the border issues.

“The EU’s activity in the South Caucasus is shaped by its geopolitical ambitions,” Russian Foreign Ministry spokesperson Maria Zakharova said at the weekly briefing in Moscow.

According to her, Moscow together with Yerevan and Baku are focused on the implementation of all provisions of the trilateral agreements reached at the highest level. Zakharova stressed that the efforts within the agreed trilateral formats is substantive, citing the work of the trilateral working group on the delimitation of the border between Armenia and Azerbaijan as an example.

“On the whole, we see that the EU’s activity in the South Caucasus is shaped by its geopolitical ambitions, rather than a real desire to contribute to the normalization of Armenian-Azerbaijani relations,” stressed the Russian Foreign Ministry spokesperson. “The Europeans’ pseudo-initiatives are more like an attempt to take credit for the mediation.”

According to Zakharova, Russia acts as a mediator, and this work yields concrete results, which are appreciated both in Baku and Yerevan.

In this regard, it is worth recalling that in April of this year, after Ilham Aliyev and Nikol Pashinyan reached an agreement on the establishment of commissions for border issues during a meeting in Brussels, the Russian Foreign Ministry reacted not with a direct statement, but with a “response to media questions”, accusing the EU of “brazen attempts to appropriate the trilateral agreements reached at the highest level by Russia, Azerbaijan and Armenia”.

The same press comment noted that Azerbaijan and Armenia are united by the “historic ties of friendship, alliance and partnership” with Russia, who, in turn, is “determined” to support the signing of a peace treaty between Baku and Yerevan.

But this time, as we can see, the Russian Foreign Ministry is making a direct statement about its opposition to Brussels’ mediation.

Maria Zakharova also tried to show that the negotiation process between Azerbaijan and Armenia had never gone out of Moscow’s control, stating in particular that Russia continues “objective work” with Baku and Yerevan to “restore transport links in the South Caucasus”.

The Russian Foreign Ministry spokesperson also pointed out that this work implies a package solution for specific areas.

“The solutions should be based on the principles of sovereignty and respect for Armenia and Azerbaijan, and therefore work for the security and economic well-being of the region,” Zakharova stressed.

Importantly, official Baku expects that Armenia will finally take a decision to form a working group for peace talks and to start working on a peace treaty between the two countries during the third phase of the dialogue in Brussels.

According to President Ilham Aliyev, a working group has already been formed in Azerbaijan.