“It looks like the Russians are not going to explain to the Armenians that the peacekeepers are a temporary phenomenon.”

An interview with Member of the Azerbaijani Parliament Erkin Gadirli: on the income of government officials, the interests of Russian peacekeepers, and the pathetic efforts of the Armenians. 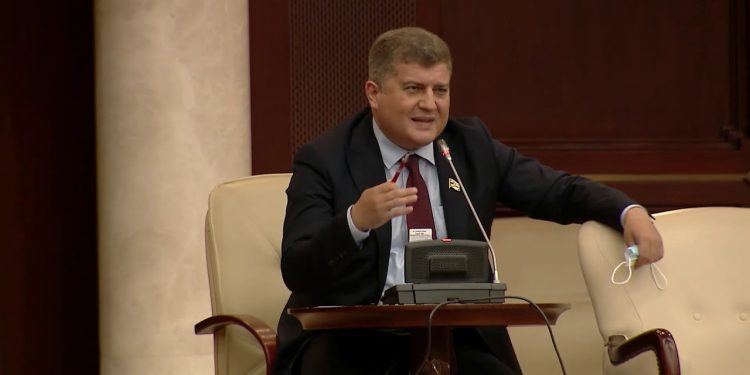 A few years ago, you made a Facebook post about all the assets you owned, right down to the price of your tie. And it was the right thing to do, you declared it at least in that way. But your fellow MPs are still keeping their incomes a secret. We learn about them only during major corruption scandals like the recent one with the “lawmaker” Feyziyev and his millions of pounds in London. Before that, there were high-profile arrests of eight heads of executive authorities, officials of various ranks, the scandal with the multimillion-pound accounts of the head of the International Bank. So, it turns out that government officials are above the law. Have you raised this issue in the parliament?

I have, more than once. But it is one thing to have a law, and quite another to have a somewhat strange legislative practice. The law stipulates that the rules for submitting income declarations should be elaborated by the Cabinet of Ministers. But so far the answer to the question why no one provides information about their income has been the same: there are no appropriate rules for filing it. The Cabinet should adopt special forms, which should indicate how to fill in this declaration, to work out the submission procedure, and so on. As you can see, there is no mechanism and nobody is working on it. Yes, I wrote about my income on my personal Facebook page and, of course, it cannot be considered an official declaration, but I did it in order to be fully open to the public. Some understood, some didn’t, but that’s another matter. At least I gave it a shot. On the other hand, I have an official declaration, which I fill out, and not only I, by the way. All members of the PACE delegation, and there are 12 of us from Azerbaijan, declare their incomes. This information is public, it is published on the PACE website, and anyone can find their MP’s name and look into their information. 12 MPs do this, but unfortunately, the rest do not.

This is understandable, because the law should be the same and equally binding for everyone.

Sadly, it isn’t. Everything comes down to formality. But this is easy to deal with: we just need to adopt and approve the forms and the mechanism.

And yet they won’t do that?

Our Cabinet is subordinate to the president, and it is strange that the highest body of executive power allows gross violations of the law signed by the head of state.

Do you think there is hope for the wind to change?

I think it will change, and very soon. The law should go into effect, especially in light of the victory in the 44-day war, things are changing for the better now.

By the way, Foreign Minister Jeyhun Bayramov said that Azerbaijan is determined to reintegrate the Armenian residents of the Karabakh region into our political, social and economic space, guaranteeing them all the rights and freedoms that citizens of Azerbaijan enjoy regardless of their ethnic origin. In your opinion, how should the process of reintegration of Armenians take place? What could be Baku’s first steps and what international experience can we use?

For a start, we need to establish control over the rest of Karabakh. We cannot reintegrate the Armenians as long as Russian troops are in Karabakh. This is quite obvious. How are we going to talk to the Armenians and reintegrate them when they are under Russian control? We have to work first to establish control over the rest of Karabakh. The peacekeeping mission in Karabakh ends in 2025. We need to refuse their services six months in advance; I can’t say exactly how this will be done, but I’m sure that until we regain full control of the territories, all talk of reintegration is nothing more than a pipe dream. By the way, the Armenian side must also understand that they are in the territory of Azerbaijan and therefore must live by our laws.

I remember the incident with an Armenian woman from Khankendi who wanted to cross over to the Azerbaijani controlled side but was stopped by Russian peacekeepers at the checkpoint in Shusha. They handed her over to the Armenian security service.

Let me put it this way, peacekeepers are nothing more than a written status. These peacekeepers are building infrastructure on our territories, but no one has authorized them to do this, have they? They are building some schools, hospitals… While the construction of social facilities should be handled by Azerbaijani companies, by the Azerbaijani authorities. Real peacekeepers should create conditions for reconciliation, their mission is to prevent a new war. Everything else is not part of their job. They should, first and foremost, create conditions for Azerbaijanis to be able to freely visit the remaining part of Karabakh, for Azerbaijani cellular service and not Beeline to work in this territory, and for water and gas to be supplied to these lands by Azerbaijani companies. But it seems that the Russians are not going to explain to the Armenians that the peacekeepers are a temporary phenomenon and that they will help them reintegrate into Azerbaijani society, because Karabakh is Azerbaijan. The Karabakh Armenians must live by the laws of Azerbaijan. But the peacekeepers are not doing that, they are rebuilding the infrastructure, and it looks like they intend to stay indefinitely.

We often hear that the peacekeepers prevent the Armenians from leaving Karabakh. What do you think their angle is? On the face of it, it seems that they are doing this in order to stay in Karabakh even after 2025.

Yes, of course. That is their goal. Who do you think is behind the shootings on the line of contact? They have to justify their presence somehow, don’t they? Think about it: the skirmishes between Azerbaijan and Armenia continue, which means that at any moment the conflict can flare up again. And since the official mission of the peacekeepers is to contain the conflict, the shootings are the perfect excuse for Russia to insist in the future on extending the peacekeeping mission in Karabakh. So these provocations will continue. Even if the Armenians want reconciliation, the Russians will not let them.

Can you comment on the tension between Baku and Paris over the visit of presidential candidate Valérie Pécresse to Khankendi? It would seem that Paris, who supports Armenia, has changed its rhetoric after the war, realizing that it has no leverage over Baku. What actions can Baku take here? I mean sanctions against French companies in our country. How can Baku normalize relations with Paris in general?

The fact that Pécresse came to Karabakh is the second question. The first one is who let her in? For some reason we do not talk about this. You see, anyone may want to come to Karabakh. But if they are not allowed in, there is no problem. So, who let Pécresse in Karabakh? The Russians! Here is the root of the problem. Armenian officials and others come to the Russian-controlled area without asking permission from Azerbaijani authorities, without even informing us. So, I would blame Russia before France. In fact, Pécresse’s visit means nothing, she was invited just to collect Armenian votes. Nevertheless, Macron outplayed Pécresse. And our President made a favor not to Armenians but to Macron because we need adequate people leading France. Macron can tell the Armenian delegations that while others walk and talk, he gets things done. As for sanctions, I don’t think it would be the right thing to do. If you think about it, what has France done other than talk? France has not helped Armenia in any way. Yes, we have every reason to criticize France, and we will, but we must keep it within reasonable limits, without getting emotional.

What are your expectations regarding the establishment of relations between Baku and Yerevan, the launch of the Zangezur corridor and the signing of a peace treaty?

The corridor will be up and running, that is obvious. But it is hard to say anything about establishing relations between our two countries. First of all, states have to recognize each other. We do not recognize each other de jure. Then diplomatic relations have to be established, direct contacts have to be formed, which as of today do not exist. Everything is being done through Russia. Their deputy prime minister comes here, talks to our president (or the other way around), Baku’s demands are communicated to Yerevan, and, by the way, how exactly they are communicated is a separate issue, there are vested interests there as well. Meanwhile, we would benefit from direct negotiations with Armenia, and Ilham Aliyev says it openly. But Armenia avoids direct contacts. We met in Vienna with representatives of the Armenian opposition parties, and now we are preparing several such meetings, at an informal level for now. I would stress that the Armenians have never avoided meetings. But there is a certain nervousness on their part, because they understand that they lost the war, they have no leverage over Baku, either politically or economically, so they are now trying to revive the Minsk Group, grasping at any straw they could use.

When the Italian Foreign Minister spoke at PACE last time, an Armenian MP asked him a question: What are you, as the Committee of Ministers, going to do about the issue of Armenian prisoners of war held in Azerbaijan? The minister answered directly: This is not within the competence of the Council of Europe, go to the Minsk Group. The Armenians fell into their own trap! After all, all these years, until the last war, the Azerbaijani delegation to PACE demanded discussions on the occupation, and the Armenians were constantly lying that the Minsk Group was in charge of this issue, so there was no need to involve the Council of Europe. Now they are paying for their own words. They were referred to the Minsk Group, to look for an answer in the daytime with a flashlight.

You have been a member of our delegation to PACE for several years now. Do you think the attitude towards Baku has changed since the victory in the 44-day war?

Of course, and not only in PACE: Azerbaijan is treated with respect all over the world. From the perspective of international law, Azerbaijan has always been right. We had every reason to demand from international organizations the liberation of our historical territories and the protection of our sovereign rights and interests. And everyone knew this, no one ever told us that this was not true, did they? Still, no one wanted to do anything: “They took the shirt off your back? Go and get it back yourself.” So we have. And now that we have won the war, the attitude is different, we are treated as a winner. Now all the efforts of Armenians, who walk around offices with appeals and petitions, collect signatures, stand with placards protesting against something, evoke nothing but pity in the world’s political establishment.