Dirty Dancing, or US “peace” agenda in the South Caucasus

The US started its game in the South Caucasus region. Though this game is not advanced and far-sighted, Washington has highlighted key points clearly enough - you would have to be blind not to notice them. 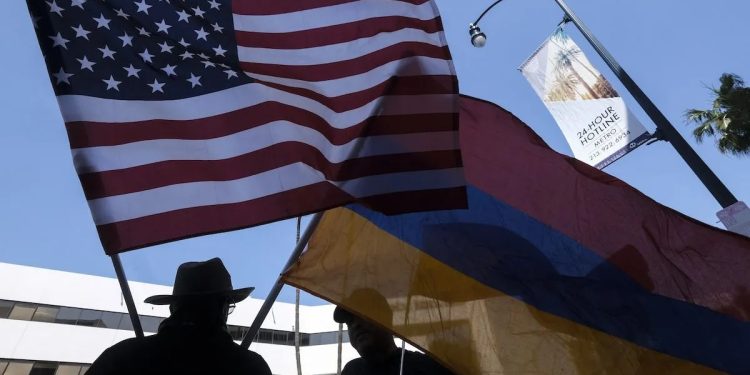 Washington, like the two-faced Janus, is trying to influence the mood in both Azerbaijan and Armenia, but it seems that the Americans have bet on the wrong horse. Soon, it will step on its own rake.

In the meantime, Washington issued another ambiguous statement, urging Armenia and Azerbaijan to boost bilateral diplomatic efforts and finally reach a comprehensive peace agreement. This call was made amid Aliyev and Pashinyan’s meeting in Brussels, stressing the powerlessness of American diplomacy, its remoteness from the political processes in the South Caucasus, and Washington’s extreme clumsiness in mediation. Vedant Patel, deputy press secretary of the US Department of State, made the statement at a press briefing. This gentleman has been appearing in the media a lot lately, making comments on behalf of the US State Department on the situation in our region.

A journalist asked the US representative to comment on the meeting of the bilateral commission on the delimitation of the Azerbaijani-Armenian border, which was held earlier on Tuesday in Moscow, as well as on the negotiations between the leaders of Armenia and Azerbaijan in Brussels on Wednesday.

“The United States remains committed to promoting a secure, stable, democratic, prosperous, and peaceful future for the South Caucasus region, and we call on Armenia and Azerbaijan to increase their diplomatic engagement and to reach a comprehensive peace agreement,” Patel responded, generally proving that the US remains in a kind of logical deadlock with its unrelated political agenda.

This is perhaps a case when it is better to say nothing at all than to get off with empty, meaningless press cliches.

Firstly, because it is in Brussels that Azerbaijan and Armenia are resolving the main issues for the peaceful resolution of the remaining contradictions between them. Moreover, without any prompting from Washington diplomats, not relying on their help at all and not biting the ground before such an “authority” as the USA. Baku has its own head.

Secondly, why hypocrite and call for peace and early signing of a peace agreement between Baku and Yerevan, if in fact, Washington is playing a strange game, something like “divide and rule”, trying to revive OSCE MG. The OSCE Minsk Group has been engaged in regional tourism and empty talk for thirty years, which has benefited the Armenian side but not the Azerbaijani side. However, it is precisely to the apogee of the absurdity to which the Minsk Group has brought its work with the mediation services of the United States and the obvious service of Armenia’s interests that Azerbaijan should be “grateful” for the victory in the Second Karabakh War. The OSCE Minsk Group, on the other hand, was left with its own bonus – it got what it fought for.

By promoting the Minsk Group as the keynote of the peace agenda, Washington made a very rude blunder. Proving that the current US political “drama” in the South Caucasus is akin to an elephant in a china shop.

It is not the first time Baku has had the impression that by this approach Washington successfully confirms that the US diplomatic corps is now interested only in lunch breaks, not bothering to monitor the situation and realities in the region. Otherwise, they would have noticed that by trying to revive OSCE MG, Washington demonstrated its clear favoritism towards Armenia and readiness to serve its interests. Even if this is just a game or flirting with Yerevan’s “wishlist”, Baku certainly does not like such fun. Moreover, they irritate Baku. It is like a trigger for the profanation of the negotiation process, which has been making Azerbaijan nervous all these years. Of course, Azerbaijan will get over this issue, but, really, you should not take these skeletons out of the closet, you really should not.

The fact that Washington missed that Ilham Aliyev repeatedly stated that the fact of MG’s political death is immutable and that even Russian Foreign Minister Lavrov gave an unambiguous verdict on the death of this mediation mission, is absolutely ridiculous and incomprehensible. Or does the lunch break really last all day in the State Department and in the White House and there is not enough time to study the political situation in a particular region?

If Washington has already decided to bet on Yerevan in its South Caucasus party, the analysts have surely miscalculated here. Simply because it is necessary to bet on winners rather than losers. In this sense, the logic of Washington really seems to have gone beyond the point of absurdity.

Thirdly and finally. The US diplomacy, which bet on the losers, showed obvious incompetence when the heads of the US and French diplomatic missions in Azerbaijan became an exception to the huge list of diplomats who visited Fuzuli and Shusha the other day. The visit took place in the context of a conference on the recovery of liberated territories and opportunities for international cooperation. One is tempted to say to the Americans: you work too rudely.

Azerbaijan did not turn a blind eye to this. As noted by presidential aide Hikmet Hajiyev, such open defiance should be regarded “as their disrespect for Azerbaijan’s territorial integrity”. This clearly indicates the course of US diplomacy in the region, which is clearly not aimed at a “comprehensive peace agreement” between Baku and Yerevan, but rather at sowing discord between the parties. Such an approach only proves that Washington has chosen the path of rejection of peace and development policy in the South Caucasus, pursued by Azerbaijan, including in its liberated territories. Although whatever game the US intends to play by expressing such destructive messages, it is Washington that should worry about transparency and positivity of its future policy towards Azerbaijan, and not vice versa – we are at home and have good relations with almost all our neighbours, so we will always find a language with them. We wish the US to do the same.