Jews are increasingly welcome in the Islamic world

Almost 100,000 Jews live in the Muslim world today, spread out across 14 countries on three continents. This figure is far short of the hundreds of thousands of Jews that formerly flourished in the African, Asian and European countries where Islam is dominant. 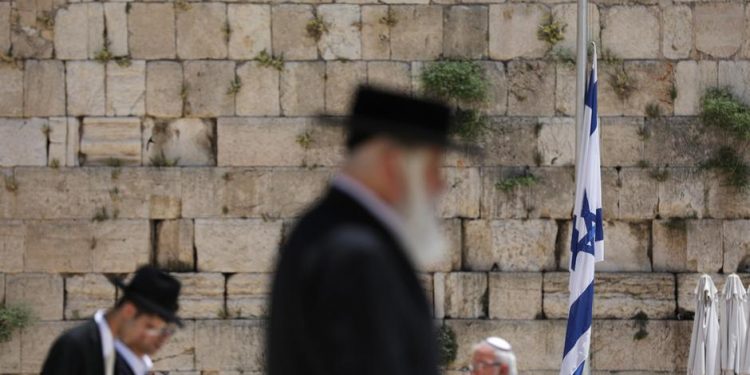 Ultra-Orthodox Jews at the Western Wall in Jerusalem walk next to an Israeli flag lowered to half-staff to honour 45 people who died in a stampede in Mount Meron, May 2. EPA

But for the first time in generations, we are witnessing fresh growth in existing Jewish populations and the emergence of entirely new communities being embraced by Muslim governments and societies.

This Jewish renaissance in the Muslim world is truly remarkable. When I launched the Foundation for Ethnic Understanding’s campaign to build Muslim-Jewish ties 15 years ago, one of my objectives was to galvanise the return of Jewish communities living in peace and harmony in Muslim countries.

Jewish audiences often responded with incredulity at the idea, seeing the potential for co-existence and partnership entirely under the prism of the 20th century’s bitter conflicts.

But what we are seeing today in the UAE, for example, demonstrates that a new era is upon us.

The Jewish community that has emerged is energetic and diverse, and proudly contributing to Emirati life. Authorities have formally licensed synagogues in Abu Dhabi and Dubai. Kosher kitchens have opened, and tens of thousands Israeli tourists have been welcomed.

The UAE may be a leader in this new spirit of tolerance, but it is not alone. Last month, a ceremony celebrated the refurbishment and reopening of the century-old synagogue in Manama, Bahrain. Moroccan officials attended Hanukkah menorah-lighting events in December, and the government – which recently re-established diplomatic relations with Israel – has integrated the history of the Moroccan Jewish community into the public-school curriculum.

In Egypt, the Ministry of Education approved a new subject in its public schools centred on the “common values” in the three Abrahamic religions of Islam, Judaism and Christianity. This decision will give Egyptian students their first ever opportunity to study verses from the Torah and to learn about Jewish culture. And in Azerbaijan, the Islamic country with the largest Jewish community, the infrastructure of synagogues and Jewish community institutions is expanding significantly.

Turkey also has taken noteworthy steps. Although it has experienced difficult relations with the US and Israel in recent years, the government has reconstructed five historic synagogues in the last half-decade. And it has enacted legislation allowing public and private sector workers to take off Jewish holidays without repercussions.

One message is coming through loud and clear in all this activity: Islamic countries want to nurture and grow their Jewish communities. But equally heartening is how Jewish communities in these countries are reaching out in friendship to their Muslim fellow citizens. Rabbis and Jewish community leaders are breaking bread at Ramadan iftars around the Islamic world and distributing food packages filled with Ramadan staples like dates, tea, lentils, chickpeas and other essentials to their Muslim neighbours, including many people in need.

These improvements in Muslim-Jewish interaction have occurred at a time when the UAE, Bahrain, Morocco and Sudan have established new relations with Israel. But the religious rapprochement runs deeper than politics, as signified by the communities that have moved closer to one another elsewhere. In the end, what we are seeing on a personal level is the result much more of Muslim-Jewish entente than Arab-Israeli diplomacy.

There is more work to do. The Alliance of Rabbis in Islamic States, created only a few years ago, now boasts rabbinic members serving Jewish communities and residing in Azerbaijan, Bahrain, Iran, Kazakhstan, Kosovo, Kyrgyzstan, Morocco, Nigeria, Turkey, Tunisia, Uganda and Uzbekistan. Not all these places are as embracing of Jews yet as the UAE has been.

But never have I been more optimistic that a true and universal Muslim-Jewish partnership may be achievable. The efficacy and durability of such a relationship is being demonstrated every day by the Muslims and Jews who live together in mutual affection and peace, and the Jews in Muslim lands who are not merely tolerated but very much integral to the countries they call home.

In the Middle East and elsewhere, Muslim-Jewish friendship and solidarity unlocks the combined ability of our faith communities to defeat Islamophobia, anti-Semitism and other forms of bigotry.

Together, we can collaborate on medical, scientific and development breakthroughs that benefit each of us, and all of humankind. And certainly, while numbers may still be modest, the emergence of vibrant and sustainable Jewish communities in Muslim lands should be seen as an indisputable advance in building a more tolerant and co-operative world.

Rabbi Marc Schneier is President of the Foundation for Ethnic Understanding and co-author with Imam Shamsi Ali of ‘Sons of Abraham: A Candid Conversation About the Issues That Divide and Unite Jews and Muslims’