Just like in Georgia: getting a piece of it, Russia loses all of Azerbaijan

Let's be honest at least with ourselves and start calling things by their proper names. From the very moment the declaration of ceasefire in Nagorno-Karabakh was signed, we have been saying that Russia plans to turn this region of Azerbaijan into a major military base. 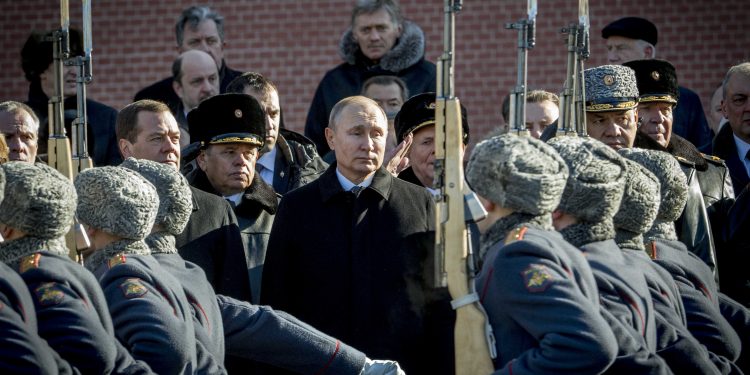 Did anyone have doubts that Russian troops were coming to the mountainous part of Karabakh to stay? That these territories are now neither ours nor Armenian, they are Russian—at least in the short term. As long as securocrats are in power in Russia, as long as its leadership will use achievements of foreign policy in the form of new conquests to cover up failures of its socio-economic policy, until the Russian authorities abandon their imperial ambitions, and until a change of regime occurs, we cannot expect Russian troops to leave our Karabakh.

Of course, the leadership of our country knows best what the Russians are up to in Karabakh, what plans they are hatching, because intelligence services, analytical centers, expert services are working on this, and not only in Azerbaijan. There must also be some kind of counteractions in preparation—in alliance with Turkey, and possibly even with Europe and the United States. It is no coincidence that the EU delegated foreign ministers of three countries—Romania, Austria and Lithuania—to South Caucasus last week. A most remarkable statement came from Austrian Foreign Minister Alexander Schallenberg: “We have a stake in this region and we cannot and shouldn’t leave it to other actors.”

The visit of the Turkish President Recep Tayyip Erdoğan to Shusha, the signing of the Shusha Declaration, his statements on the possibility of creating a military base in Shusha, the discussion of the Karabakh issue at his meeting with Biden, the visit of high-ranking European officials to the region and their statements give us hope that we will see a serious fight for Azerbaijan and Armenia, in which the Kremlin’s plans will not necessarily come to fruition.

For now, however, the fact is that Russia came to Azerbaijan, and it was not to keep peace, although, to be fair, the ceasefire is mostly being observed. Then why is Russia here? Definitely not to help Armenians and Azerbaijanis coexist in peace.

Anyone would agree that Russia is the only country in the world still living the paradigm of the 19th century imperial policy. The British Empire gave up its colonies voluntarily, the Ottoman, Austro-Hungarian, German Empires collapsed. Only Russia keeps planning conquests along all of its borders, as it has under any authority, be it tsars, Communists, or pseudodemocrats. It did so under Catherine the Great, and it did so under Lenin, Stalin, Brezhnev and even Yeltsin, let alone under Putin.

It is because of this policy that Russia is virtually losing Azerbaijan again—just as it did after the murder of innocent people on January 20, 1990, and after the Khojaly massacre, in which it also had a hand. Still, Azerbaijan continued maintaining cooperation and friendship with its northern neighbor in the hope that Russia would abandon its imperial ambitions and aspirations to subjugate Azerbaijan. Admittedly, Russia has many ways to pressure Azerbaijan and it happily uses them, threatening to deport migrants, banning import of our tomatoes, using Armenians to start provocations—on the line of contact, and now on the border. The list goes on and includes military superiority.

Bringing in troops under the guise of “peacekeeping forces” was a long-cherished dream of Moscow’s, and all sober-minded people in our country understood the consequences. Finally, an opportunity arose, and the “Russian peacekeepers” were stationed in Nagorno-Karabakh allegedly to disengage the Azerbaijani and Armenian troops, ensure the ceasefire, assist with the disarmament and withdrawal of Armenian troops from the occupied territories, create conditions for further peace process between Azerbaijan and Armenia. But what actually happened? You have to be deaf and blind not to know: the moment they set foot here, the Russians started treating Karabakh as one of Russian governorates, from restoring communications to building houses, both for themselves and for the Armenian population of Karabakh. Of course, they did not forget their primary purpose that had brought them here by actively and openly upgrading their personnel and the resources, even bringing heavy military equipment. Naturally, our government is well aware of it, and ordinary citizens regularly see visual proofs of the movement of troops and equipment on social media.

None of this fills us with gratitude to the “peacekeepers”, none of this can contribute to the strengthening of the Russian-Azerbaijani relations. Not to mention that in some parts of the still occupied territory, Russian flags hang next to the separatists’ flags, the latter’s leaders and the command of the “peacekeepers” are thick as thieves, General Muradov does not give a thought to handing the criminals, including Arayik Harutyunyan, who bombed Ganja, over to Azerbaijan, Russian is declared official language in our land, and renowned Russian politicians and even parties make open statements, urging to annex Nagorno-Karabakh to the Russian Federation. Need we say more?

With its every move, Russia is making the same mistake it did with Georgia at the end of the last century, when it supported Abkhazia and tore it from Georgia, getting a part only to lose a whole. Georgia left the Russian orbit forever; it shook off the solid imperial chains and headed for the integration with Europe and NATO. Russia irretrievably lost Georgia and Georgians—the latter may not stop being good neighbors but they will never again be “younger brothers” with the “big brother’s” fist hanging perpetually over their heads.

And now Russia heads down the same road, doing its best to lose the trust of Azerbaijanis, who let it into their territory as a guest, stomping around Karabakh like a bull in a china shop. Again, after the 11th Red Army, after the Khojaly genocide, after January 20, Azerbaijan still remained Russia’s friend, and there is still fierce competition for spots in the first grades of Russian schools. Azerbaijani parents still want their children to read the great classics in the original, to grow up with Pushkin’s fairytales and poems, Tolstoy’s and Turgenev’s novels, to recite Akhmatova and Tsvetaeva, Yesenin and Mandelstam, and not just Nizami, Fizuli, Omar Khayyam, to their beloved.

We do remember Azerbaijanis showing utmost restraint and wisdom, despite knowing Russia’s true motivation: there were no protests after the ceasefire was signed, and some even came out into the streets of Baku waving Russian flags. Obviously, young people were happy about the end of the war, the victory, the enemy’s surrender, because the current generation is mostly apolitical and knows little about the history of Russia with its great-power imperial appetites and ambitions.

But from its very first days in Karabakh, Russia did its absolute best to make Azerbaijanis stop trusting it.  Every day the “Russian peacekeepers” and the Russian Federation give us plenty of food for thought. Here is the latest. Haqqin.az says that during one of the trials taking place in Baku, a member of Armenian armed groups, who had committed terrorist attacks, diversions and other crimes in the territory of Azerbaijan, defendant Mkrtich Minosyan testified that he was born in Gyumri, had done his military service in Khojaly in 2016-2018, and had been summoned to the military commissariat in November.

“We were brought to Lachin by buses late at night. The Russian peacekeepers let us through without checking us. The bus stopped at the foot of the mountain. We were divided into groups and then climbed the mountain. We stood guard there for ten days, and there wasn’t a single shooting during that time. On December 13, we were ordered to climb back down. When we did, Azerbaijani soldiers detained us. We surrendered our weapons to them,” Minosyan said.

Well, I never. Read it again: “The Russian peacekeepers let us through without checking us.” The sentence speaks for itself.

And here is another one. “Russian border troops will be deployed on the Armenia-Azerbaijan border, then there will be demarcation and delimitation, after which the border troops of Armenia and Azerbaijan will stand on the border,” Secretary of the Security Council of Armenia Armen Grigoryan said in an interview with Armenian Public Television, expressing “confidence” that the Russian peacekeepers would not leave Karabakh in four and a half years. He claims that he was “assured of this by his Russian colleagues.”

Earlier, the Armenian service of Radio Liberty reported that official Yerevan and Moscow were negotiating the expansion of the Russian military base in Armenia, and that it was decided at the meeting of the Armenian government on May 27 to allocate to the Border Department of the Russian FSB in Armenia a land plot with a total area of about 3.5 ha in Syunik Province (Zangezur) with the right of free use.

Again, no comment. Russia is not disappointing us. Russia is doing its best to confirm our assumptions. But someday, our other predictions may be confirmed as well, and Russia will be ruined by its own imperial appetites and thirst for supreme power.