On June 8–10, Russia’s Foreign Minister Sergei Lavrov paid a two-day visit to Yerevan, where he met with Armenian leaders and attended a foreign ministerial session of the Collective Security Treaty Organization (CSTO). 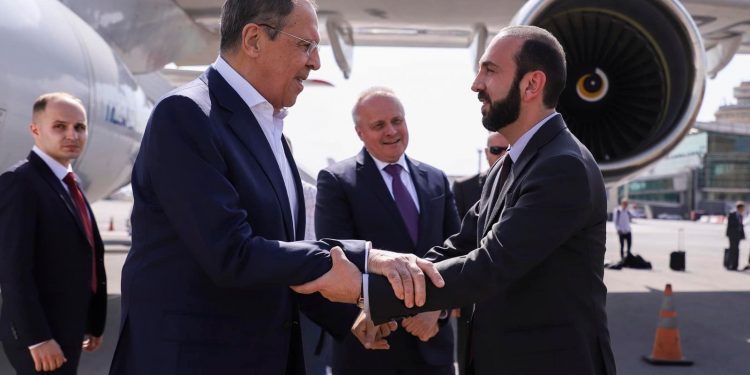 His talks with the Armenian representatives and his statements concerning the Armenia-Azerbaijani peace negotiations received more attention from the media and local observers than the meeting of the CSTO, the latter of which did not yield anything of note (Odkb-csto.org, June 10).

Lavrov’s visit came only a week after the tenth gathering of the Tripartite Working Group, held in Moscow on June 3 (Azernews, June 4). The body’s previous meeting occurred at the end of last year. The Tripartite Working Group, which was established by the leaders of Armenia, Azerbaijan and Russia at their summit in January 2021, is tasked with preparing action plans regarding regional railroad and highway projects (see EDM, January 12, 2021). The newest developments reportedly included progress toward resolving issues with border and customs controls, passenger and freight transit, as well as toward the clarification of unspecified “approaches” (Armradio.am, June 4).

Notably, the group had failed to meet in this format over the last six months, but this did not prevent Baku and Yerevan from reaching agreements on some major questions relating to regional transportation and other issues during parallel negotiations mediated by the European Union (see EDM, April 14, May 31). Both the Armenians and Azerbaijanis, however, have taken care not to completely disregard Moscow or antagonize it. Hence, in addition to reactivating the Tripartite Working Group, they have agreed to organize the second meeting of the border commission in Moscow, before the third one in Brussels (Mfa.gov.az, May 24).

Maria Zakharova, the spokesperson for Russia’s Ministry of Foreign Affairs, had earlier criticized the EU’s attempt to “hijack” the Armenian-Azerbaijani peace process (see EDM, May 18, 31); in contrast, Foreign Minister Lavrov did not comment on the mediation by Brussels during his visit to the Armenian capital. However, he implicitly rebuked the Western involvement by stressing that the three trilateral statements (dated November 10, 2020, January 11, 2021, and November 26, 2021) of the Armenian, Azerbaijani and Russian leaders are “clear roadmaps that we all should be guided by” (Panorama.am, June 9).

In referring to Baku and Yerevan’ negotiations over regional transportation projects, Lavrov said that the railway route between Azerbaijan and Armenia has already been approved, and now the agreement on the highway is being completed, which, of course, will “be based on the recognition of the sovereignty of the Armenian territory” and “there can be no ambiguities here” (News.ru, June 9). By saying this, Lavrov reiterated and, thus, endorsed the outcomes of the latest Brussels summit of Armenian and Azerbaijani leaders, the detailed content of which had still not been made public (Consilium.europa.eu, May 23).

In this context, the Russian foreign minister said that control at the border crossings between Armenia and Azerbaijan will be functioning on a “simplified regime” (Arka.am, June 10). Although Lavrov’s reassurance that the trans-Armenia section of the transport route, which Azerbaijan calls the “Zangezur corridor,” will remain under Armenian sovereignty, his mention of a “simplified regime” raised questions in Yerevan (Turan.az, June 10).

It may be inferred that a similar “simplified regime” would also be applied to the “Lachin corridor”; a highway passage connecting Armenia and the Karabakh region of Azerbaijan. Two factors lend credence to this view. First, Azerbaijani President Ilham Aliyev had stated late last year that restrictive regulations could be applied to the trans-Zangezur highway only if they are also applied to the Lachin corridor (see EDM, January 28). The Azerbaijani government has largely held to this position since then. Second, Baku’s state road agency announced in April that, in addition to constructing an improved highway through the Lachin corridor, Azerbaijan is also building a customs post at the Armenian-Azerbaijani state border crossing (Haqqin.az, April 8). According to the agency, the new road is supposed to be ready by July of this year. The customs post will likely be active once a similar regime is launched along the trans-Zangezur passage.

Another ambiguity raised during the visit was about Lavrov’s statement concerning the March 2022 incidents of violence in the village of Farrux, in Karabakh (see EDM, March 29). Answering a question from journalists about the current situation in the village, the top Russian diplomat said that the issue would be resolved “within the framework of the upcoming substantive work on the delimitation” of the Armenian-Azerbaijani border (News.am, June 9).

This prompted an immediate reaction from Azerbaijan’s Ministry of Foreign Affairs: its spokesperson, Leyla Abdullayeva, denied any connection between the situation in Azerbaijani Karabakh and the delimitation of the Armenian-Azerbaijani state border (APA, June 9). After that, an edited transcript of Lavrov’s statement appeared on the Russian foreign ministry website, which said that the delimitation of the state border would “help increase confidence between Baku and Yerevan and prevent incidents like Farrux.” Nevertheless, it remained unclear if Lavrov made this comment deliberately, as claimed by some Armenian experts (Jam-news, June 11).

All this came against the backdrop of recent tensions between Baku and Moscow. Since the beginning of the Russo-Ukrainian war, Moscow had banned a number of Azerbaijani media outlets, some of which are believed to be close to the government, due to their supposedly distorted coverage of the conflict (BBC News—Russian service, June 10). In turn, Azerbaijan blocked the Russian state news agency RIA Novosti on June 3, after it published an interview with a representative of the Armenian separatist movement in Azerbaijani Karabakh, whom the media source presented as “the state minister of the Nagorno-Karabakh Republic.” Baku interpreted this coverage as disrespectful of the territorial integrity of Azerbaijan (Report.az, June 4). The interview was later removed from RIA Novosti’s website.

Since the conclusion of the Second Karabakh War, in November 2022, Baku and Yerevan have achieved some notable progress on issues related to regional transportation routes and border delimitation in their EU-mediated negotiations. Nevertheless, plenty of ambiguity remains concerning the process—as well as Russia’s role in it.