The legal foundation of the temporary presence of the Russian peacekeeping contingent in Karabakh is presently hinging on the 10 November 2020 trilateral declaration, yet its mandate remains shrouded in what one may call "constructive ambiguity". 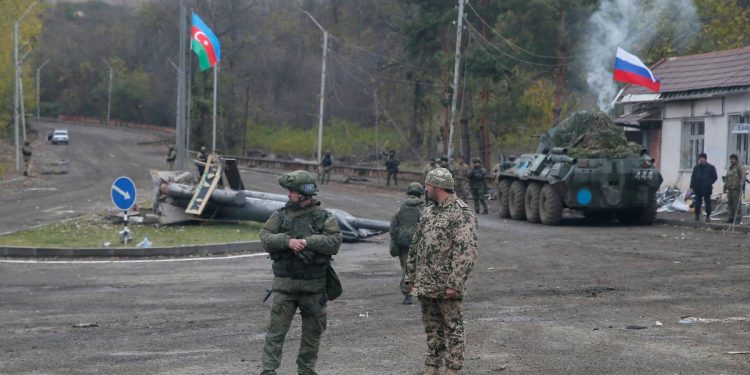 The ceasefire agreement stipulates the bare minimum without going into extensive details on the nature and functional scope of the peacekeepers. The overwhelming feeling is that the lack of a clearly stipulated mandate is due to the fact that the parties did not come to a common understanding and the suggested specification modes have militated against the interests of at least one of the actors.

Baku does not want to concur with any agreement that may remotely or potentially endanger its sovereignty over Karabakh. Moscow seems to be relatively satisfied with the present sway it has over the facts on the ground and has no appetite for facilitating a new arrangement that would have enabled Azerbaijan to exercise de facto control over its sovereign territories, currently within the zone of responsibility of the Russian contingent.

However, the concern in Armenia seems to be that any new arrangement leading to gradual retrenchment of the Russian presence in Karabakh will be a blow to its contrived hopes for the resuscitation of the remnants of the so-called illegal and unrecognised “Nagorno-Karabakh Republic (NKR)”.

It is abundantly clear that the normative framework applicable to the peacekeepers is relatively unspecified. Article 3 defines their deployment zone as “along the contact line in the (former) Nagorno-Karabakh and along the Lachin corridor”. The self-same article prescribes the extent of the contingent within the limits of the “1960 military personnel with small arms, 90 armoured personnel carriers and 380 units of automotive and special equipment”.

Article 4 states that the peacekeeping contingent “shall be deployed in parallel with the withdrawal of the Armenian armed forces”, and the duration of its period of stay is defined on the basis of a “5+5” formula, in line with which the timeframe is five years that “shall be automatically extended by a further five-year period if none of the Parties declares six months prior to the expiration of the period of its intention to terminate the application of the provision”.

Despite this, when it comes to the exact content of the mandate or to the clearly-delineated functions and duties of the peacekeepers, these are not addressed in any provision of the trilateral declaration. Article 5 states that “in order to increase the effectiveness of control over the implementation of the agreement by the parties to the conflict, a peacekeeping centre shall be deployed to exercise control over the ceasefire”.

This is different from the peacekeeping contingent and refers to the joint Russian-Turkish monitoring group based in Aghdam, established in accordance with the 11 November memorandum of understanding between Moscow and Ankara. This entity has not, to date, been proven to sway considerable influence over the state of operational affairs on the ground. Its importance lies in the fact it provides space for Turkish presence in Karabakh, with potential consequences to follow.

The 19 months following the trilateral declaration and deployment of the Russian peacekeepers have not been completely devoid of problems. Although Baku, on the whole, praised Moscow’s role in a trilateral format, on a more specific level, its attitude towards peacekeepers has been critical in a measured tone. It is generally assumed that the rapid turnover of mission heads was instigated by virtue of Azerbaijan’s disapproval.

Since the peacekeepers are stationed in the internationally-recognised territories of Azerbaijan, the latter’s red lines and their implications for the mandate dilemma are to be duly evaluated.

First of all, Baku does not want to alter the present “temporality” of the peacekeeping contingent. The terminological attitude adopted favours the expression “the temporary zone of the Russian peacekeepers”, which is quite apt, as it reflects the “5+5” formula and the veto right as to termination. Incidentally, the word “temporary” is not always present in the language employed by Russian officials, a semantic issue with seismic implications.

Secondly, Baku does not seem to be inclined to give the peacekeepers a more formal status or treaty-based legitimacy. The 10 November declaration is a ceasefire agreement and not a peace treaty. Article 4 of the trilateral declaration has not been fully implemented, as the remnants of the so-called “NKR” are still present in Khankandi. The fear is that a more entrenched Russian presence in Karabakh, without Baku’s direct involvement, will involve corollary risks.

Thirdly, Baku may sign such a document specifying the exact mandate only on a bilateral basis with Russia. Although the trilateral declaration – the current basis of the Russian peacekeeping mission – is signed by Azerbaijan, Armenia and Russia, it is apparent that because the Russian peacekeeping mission zone is sovereign Azerbaijani territory, Baku does not believe Yerevan should be a direct party to a legal instrument, specifying the peacekeepers’ mandate.

The likely probability is that the constructive ambiguity that is presently the case will remain unaltered in the immediate future. A clear legal mandate is possible if Baku obtains a measurable amount of effective control in what is now the temporary area of the Russian contingent.

One could assume, albeit tentatively, that the fate of the peacekeepers will be decided upon closer to 2025 – towards the deadline when Azerbaijan may exercise its veto right. At present, chastened in Ukraine and under international pressure, it is unlikely that Russia will aspire to gain more leverage than is currently the case. Given the peacekeepers’ track record, which has not exactly been perfect, Azerbaijan’s present and considered calculation does not seem to favour agreeing to a clear mandate.