An M-346 sporting the color scheme resembling the one applied to the Turkmenistan or Azerbaijan’s jets has been spotted in Italy last week. 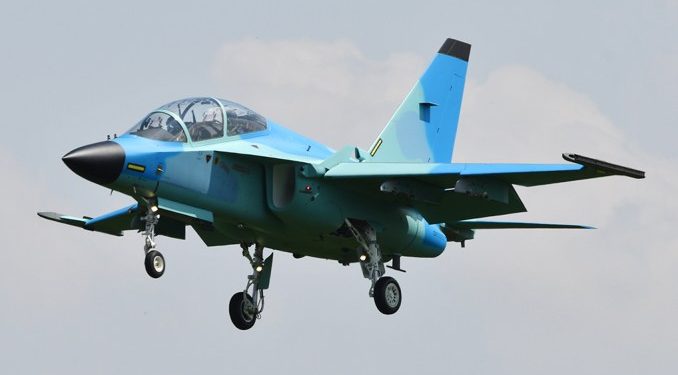 An M-346 Master in a new exotic color scheme about to land at Venegono airport on May 28, 2021. (All images: Oscar Bernardi)

A pretty interesting M-346 “Master” sporting a camouflage paint scheme quite close to the one used by the combat aircraft of the Turkmen or the Azerbaijani Air Force was spotted at Venegono airport, in northwestern Italy, after its first flight, by photographer Oscar Bernardi, on May 28, 2021.

The aircraft was reportedly involved in the very first flight in the new livery.

Although the export customer for the Italian advanced jet trainer has not been officially confirmed yet (we have reached out to Leonardo media relations who told us they do not comment images taken by spotters or photographers outside their facilities), the sighting confirms the “Master” is being reading for another operator. Which one is difficult to say, considered that both Turkmenistan and Azerbaijan have been in talks with Leonardo about the jet and they use almost identical color schemes.

According to some rumours, the one depicted in the photos taken by Bernardi should be the first aircraft for the Turkmen Air Force that, in May 2018, was showcased both the M-346 and the C-27J tactical airlifter.

The Turkmen Air Force is believed to have placed an order for six M-346 jets. As reported by Defense and Security Monitor last year, the Italian Ministry of Foreign Affairs “reported to the Senate on details of the export of armaments in 2019. Turkmenistan featured prominently in the report, having become the second-largest export customer for the year, after Egypt. Ashgabat purchased €446.1 million of unspecified Italian military products in 2019. The MFA report did not break down the type of equipment Turkmenistan ordered, but it did indicate that unnamed customers had purchased six M-346 jet trainers and eight AW139 helicopters. BMPD, the unofficial blog of the Russian think tank Centre for Analysis of Strategies and Technologies, concluded it is likely Turkmenistan is the unnamed customer for the aircraft.”

Noteworthy, in December 2020 we reported about a brand new C-27J Next Generation that flew for the first time from Turin Caselle airport, home of Leonardo’s facilities, sporting a color scheme with a dark and light brown camouflage quite close to be one used by the Turkmenistan Air Force An-74.