French President Emmanuel Macron has once again, how shall we put it delicately, put his foot in it. 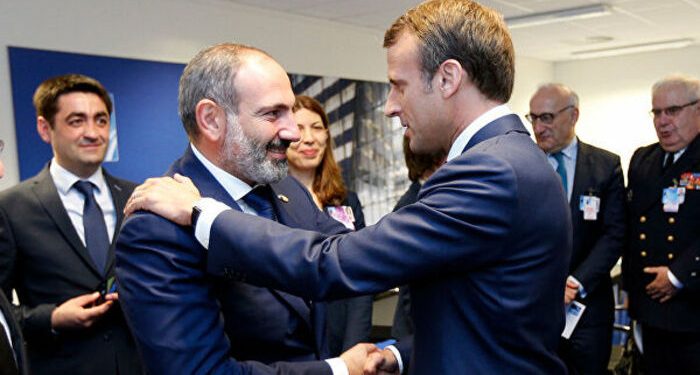 The master of the Élysée Palace decided to speak out on the subject of the South Caucasus and gave an interview to Nouvelle d’Arménie, where he said, “What has been happening on the border (of Armenia and Russia) for the last two years … 5,000 Russian soldiers are allegedly guarding the border, (but) the Russians took advantage of this conflict that lasted several centuries, played the Azerbaijani game and returned to weaken Armenia, with which they were once close,” Macron said. “Do you see what is happening? This is Russia’s attempt to destabilize the situation. It wants to create a turmoil in the Caucasus to destabilize all of us.” He then assured that France will not “let Armenia down”. “Armenia is a country with which we have a unique connection. (…) Azerbaijan has launched several offensives along the border. We have condemned them. We will not abandon Armenians,” the head of the Fifth Republic promised.

Of course, each country has the right to choose its own allies, satellites, “proxies” and to decide whom to support and whom to “abandon”. And if Macron has forgotten how on the eve of the 44-day war Paris was making grand plans with Yerevan in mind, how those plans fell apart after Armenia’s defeat, how Pashinyan, forgetting all of Macron’s recommendations, clung to Russia’s skirts and how Macron himself called him “inadequate”… well, falling into the same Armenian trap over and over again can be considered the sovereign right of the French president. Similarly, Yerevan can once again “love with its ears” without giving much thought to the fact that France has been kicked out of everywhere it tried to puff out its chest and bang its fists on the table over the past few years. This is what happened in Libya, where France was “whipped” by Turkey, and in West Africa, which Paris considered almost its own private backyard until it was unceremoniously pushed out by Russia, and even in the Pacific, where it was outflanked with cold politeness by the US, Britain and Australia.

But Azerbaijan will draw its own conclusions from Monsieur Macron’s “festival of love for Armenia”, including in the delicate and sensitive (for France) issue of the persistent attempts of the Élysée Palace and the Quai d’Orsay, home of the French Foreign Ministry, to revive French mediation in the region.

One would do well to remember that in realpolitik one can either be a mediator or directly declare one’s support for one of the parties. Paris could have asked its protégés in Yerevan whether they would accept Turkey’s mediation. But France undertook to support the aggressor, which has failed to “sober up” even after its defeat in the 44-day war and carries on with its plans for a military revanche. French mediator Roquefeuil’s tour of the region and Macron’s statement “we will not abandon Armenians” do not mix well. This “blend” will not produce anything worth serving at the table. Not even under a “Made in France” label. And truth be told, French mediation with such a glaring Armenian accent cannot and will not be accepted in Baku, where they know how to defend their legitimate rights and interests. Moreover, it is Azerbaijan who makes the political weather in the South Caucasus. Azerbaijan, who has the economy, oil and gas projects, so important for Europe, and the victory in the war, and international law to support it. To put it simply, Monsieur Macron shot himself in the foot with this interview. And he also “killed” Roquefeuil’s mission on takeoff, after promoting it so assiduously.

Is the master of the Élysée Palace also deeply unaware of this? A politician of Pashinyan’s caliber may screw up like this in a country of Armenia’s caliber, but not the President of France.

It is another matter that Paris simply did not draw “red lines” for itself, and it failed to see where the election campaign, designed to attract French Armenians’ votes, ended and big-time diplomacy began. Admittedly, there is already an understanding that they in Europe can no longer particularly zealously bust their vocal chords advocating for the Kremlin’s favorite outpost amidst the Ukrainian war. Hence the delusional reasoning in the style of “Russia is playing on the side of Azerbaijan”, “we will not abandon Armenia”, “Azerbaijan has launched several offensives along the border”, etc.

Only big-time diplomacy does not forgive such blunders. It turns out that the Azerbaijani public was quite right in its strong skepticism regarding the prospects of French mediation in the region: Monsieur Macron, for all intents and purposes, proved it vividly and eloquently.

It will not be easy for French diplomacy to get up, dust itself off, and pretend that everything is fine after being tripped up by its president like this.