Macron’s macarena to the Armenian duduk

French President Emmanuel Macron assured in his recent speech that Paris would not let the Armenians down. "Armenia is a country with which we have a unique connection. 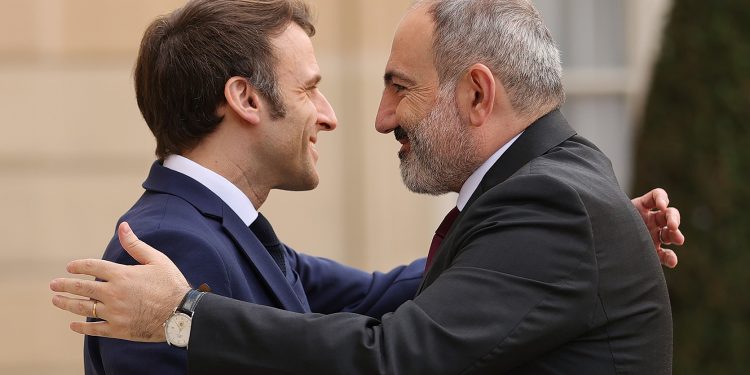 (…) Azerbaijan has launched several offensives along the border. We condemned them. We will not abandon Armenians,” he said.

The French president has one great passion: he wants to get involved in the Armenian-Azerbaijani settlement as a mediator and peacemaker. It is hard to say whether he expects to win the Nobel Peace Prize or whether he is being selfless, but every time Macron hears the Armenian duduk he immediately begins to dance an impassioned political macarena.

This time he accused Russia of “targeted provocation” of the recent clashes between Armenia and Azerbaijan “as part of efforts to destabilize the situation in the Caucasus region and beyond”. His version of the events on the Azerbaijani-Armenian border is as follows: “5,000 Russian soldiers are allegedly guarding the border, (but) the Russians took advantage of this conflict that lasted for several centuries, played the Azerbaijani game and returned to weaken Armenia, with which they were once close.”

That is, in his opinion, Armenians are sweet swarthy angels who must not be abandoned. And it is all Russia’s and, of course, Azerbaijan’s fault. Then he repeated his mantra of several years on the unique Armenian-French bond. He also traditionally swore to protect Armenia from all threats.

In doing this, he hinted, subtly, or so he thought, that in order to solve this problem the EU should urgently appoint him the “main man on the Armenian issue”, the mediator in the negotiations between Baku and Yerevan. After all, was it not he who facilitated the meeting between the Prime Minister of Armenia and the President of Turkey in Prague in the margins of the summit of the European political community for the first time in modern history? A serious bid for leadership in the “Armenian issue”, of course.

Interestingly enough, overexposed to the so-called Armenian establishment, Macron picked up their typical manners, including empty rhetoric and bravado, before he knew it. Well, as the saying goes, he that lies with dogs must rise up with fleas.

By way of example of his protection of the Armenian interests, the French president said that Paris is not going to buy even a cubic meter of Azerbaijani gas, even a half-barrel of Azerbaijani oil. He loudly and pompously stated that “our values and principles cannot be bought neither for gas nor for oil.” The entire world, it seems, should admire such a principled stance.

Except that in 2020, the share of Azerbaijani oil in France’s energy imports was … 1.02%, a figure comparable to a statistical error. Even the French imports from Spain were higher at 1.41%. The rest came from Kazakhstan and the United States, 15% each, and from Algeria, Nigeria, the Saudis and Iraq.

In short, no particular self-sacrifice was required from Paris to “heroically renounce Azerbaijani oil”. Such volume is easily replaceable. The situation with gas is roughly the same. Macron may be an Armenophile, but he knows when to make bold statements and when to keep quiet.

Macron’s constant readiness to dance macarena to the Armenian duduk resulted in Paris becoming Europe’s main alarmist on the Armenian issue. Whatever the French president may discuss, he keeps circling back to Yerevan’s problems and, accordingly, the Azerbaijani threat. He does not seem to notice that his audience is already sick and tired of this number and the performer evokes in it nothing but mockery and bewilderment.