In Israeli media, commentators and other influencers are crafting a narrative that is antithetical to Israel’s core interests. 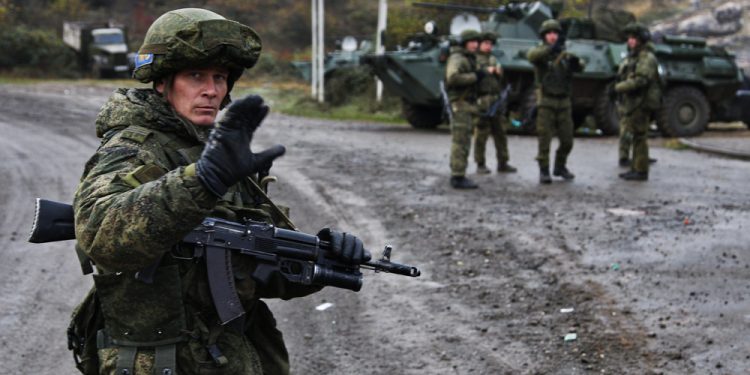 A Russian peacekeeper holds up his hand to stop a photo being taken as a checkpoint is set up at the entrance to Khankendi, Nagorno-Karabakh's regional capital, on Nov. 13. Jack Losh for Foreign Policy

Amid Russia’s continued invasion of Ukraine, it is easy to miss Moscow’s intervention in other conflict zones. Yet, in Eurasia’s South Caucasus region, the latest Russian interference should not be viewed as isolated from the events in Ukraine.

Last weekend, Israeli media took note when the Russian defense ministry released a statement accusing Azerbaijan of “violating the provisions of the tripartite statement of the leaders of Russia, Azerbaijan and Armenia of November 9, 2020” by entering “the zone of responsibility of the Russian peacekeeping contingent on the territory of Nagorno-Karabakh and setting up an observation post.”

Nagorno-Karabakh refers to the territory occupied by Armenia for three decades before Azerbaijan reclaimed it in the countries’ 2020 war, which ended with a Russian-brokered ceasefire in which Armenia agreed to withdraw from the area. In 1993, well before Azerbaijan took back control of the border region, four UN Security Council resolutions affirmed Nagorno-Karabakh as internationally recognized Azerbaijani territory.

While the Armenia and Azerbaijan conflict is naturally overlooked not only now during the war in Ukraine but even in less tumultuous times. On a global scale, Armenian separatists who remain in the formerly occupied territories openly support Russian aggression, recently applauding Russia’s recognition of two breakaway regions in eastern Ukraine, Donetsk and Lugansk, as independent republics.

Aligning with the UN resolutions on the matter, the US State Department explains that America “does not recognize Nagorno-Karabakh as an independent country” and “supports the territorial integrity of Azerbaijan.” But last Friday, the State Department said it was deeply concerned with recent Azerbaijani troop movements, describing them as irresponsible and unnecessarily provocative.

In doing so, the State Department contradicted its own policy. Furthermore, by failing to stand with Baku, Washington neglects not only international law but also the strategic role that Azerbaijan plays in leading the triple-pipeline Southern Gas Corridor initiative – a centerpiece of efforts to decrease European dependence on Russian energy.

Meanwhile, in Israeli media, commentators and other influencers are crafting a narrative that is antithetical to Israel’s core interests. By continuing to use terms such as Nagorno-Karabakh and Artsakh (the Armenian name for Nagorno-Karabakh) for territories that Azerbaijan reclaimed in the 2020 war, they are distorting the realities on the ground and belying international law. Additionally, by amplifying Russia’s accusations against Azerbaijan in news headlines, they are lending undue credibility to Moscow’s influence war at the worst possible time, given the invasion of Ukraine. Indeed, Russia’s actions in Ukraine and in the South Caucasus are ultimately branches of the same tree.

However, if media influencers work to study and internalize the realities of these conflicts, it is not too late to fall on the right side of history.

JACOB KAMARAS, is the managing editor of the San Diego Jewish World, the former editor-in-chief of the Jewish News Syndicate and the founder of Stellar Jay Communications, a PR firm representing Azerbaijan.