Mediation war in the Caucasus: How Putin is trying to regain control against Europe

Charles Michel and Emmanuel Macron must be feeling frustrated because Vladimir Putin is seeking to regain control of the South Caucasus region and show that he is not weakened by his difficulties in Ukraine, writes Sébastien Boussois. 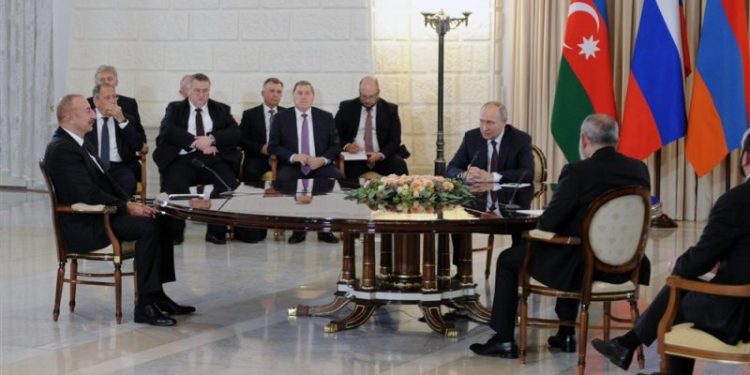 Sébastien Boussois is a doctor of political science, a researcher in the Middle East, Euro-Arab relations/terrorism and radicalisation, a teacher in international relations, and a scientific collaborator of CECID (Free University of Brussels), OMAN (UQAM Montreal) and SAVE BELGIUM (Society Against Violent extremist).

By receiving Azerbaijani President Ilham Aliyev and Armenian Prime Minister Nikol Pashinian in Sochi on 31 October, Russian President Vladimir Putin showed that he still intended to count in the Caucasus and influence his traditional zone of influence.

Captured by his war against Ukraine, he had somewhat neglected the South Caucasus region for several months, the very place where Moscow had snatched in November 2020, exactly two years ago, a peace between Armenians and Azerbaijanis, at the outcome of a particularly deadly 44-day war.

This war enabled Baku to restore its integrity and recover the 20% of its territory occupied by Armenia since 1992, which had been condemned three times by the United Nations for the violation of the sovereignty of Azerbaijan.

This conflict caused nearly 6,000 deaths and Russia allowed a ceasefire in the first instance, and in the second, the presence of an interposition force and rounds of negotiations to reach a final peace agreement.

On the side of Azerbaijan, the case has been closed for two years and Baku wishes to advance this process with Armenia, still torn and embittered by having lost these pro-Armenian separatist territories.

However, since his reelection, Armenia’s Nikol Pashinian has multiplied actions and meetings with the president of Azerbaijan to make Karabakh a real zone of peace, and settle a number of outstanding issues such as mines, final borders, the return of refugees, the exchange of prisoners, but also the construction of access roads as well as economic cooperation to boost the two countries.

Since last February, with the start of the war in Ukraine, and while Moscow was cornered elsewhere, incidents have multiplied between the two countries on the ground, despite the leaders’ persistent desire to advance peace.

It was the European Union which then took over with the organization of several meetings headed by Charles Michel, President of the European Council, to advance the various files.

Last October, the creation of the European Political Community promoted by French President Emmanuel Macron saw the light of day in Prague and was illustrated in particular by a new meeting between the Armenian and Azerbaijani leaders.

Many saw in this proof that European mediation was moving forward but had also taken advantage of the Russian vacuum.

However, everything could have recently changed.

With the meeting in Sochi in recent days, where Putin has been receiving officials for weeks, the dice have once again been cast.

The Russian president’s show of force with the presence of Pashinyan, whose country has remained very close to Russia since the start of the war, and of Aliyev, who was one of the first to condemn the invasion and bring his humanitarian and material support to Ukraine, revives the dynamics of competition between mediations.

Charles Michel and Emmanuel Macron must be feeling frustrated because Putin is seeking to regain control of the South Caucasus region and show that he is not weakened by his difficulties in Ukraine.

Against Europe, Putin wants to wield arms and words, war and diplomacy at the same time.

The narrative of questioning the domination of the West, in which Russia’s partners and supporters have been engulfed, carries Moscow into all the fields of an unprecedented hybrid war.

Russia’s desire to promote bilateralism (transactionalism, as Donald Trump’s supporters would say), and to play the hegemon in the Caucasus is a new parameter of the paradigm shift sought by Moscow and all those who want the end of this Western leadership, wherever it is.

Even if it is very far from the geographical and political borders of Europe.