Clearing the landmines in Nagorno-Karabakh could take over a decade. It will prove to be an important step in the peace process. 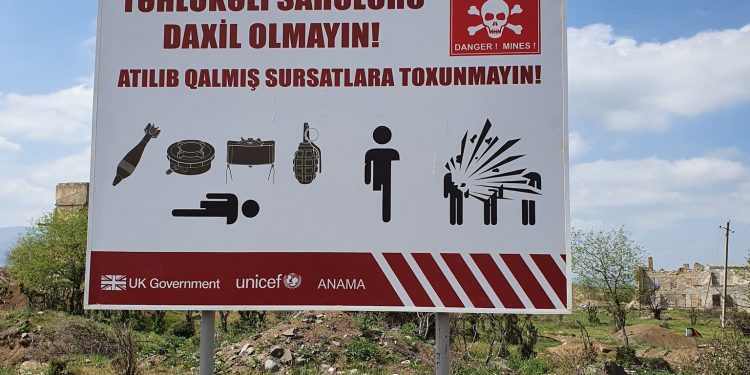 Although Azerbaijan won back control over a large swathe of land that had been occupied by Armenia since the early 1990s, President Ilham Aliyev still asked hundreds of thousands of internally displaced Azerbaijanis not to rush home: “Every former Internally Displaced Person wants to return to his native village. But I must ask that they wait a bit longer until our work to clear the mines is complete”.

Despite this, the HALO Trust, a British charity which has been long involved in mine clearance in Karabakh, has warned that “the extent of landmine contamination from the current conflict is unknown”. On a visit in mid April to the region of Agdam, Karabakh, our party of journalists were constantly warned not to stray off the marked paths for fear of mines. Large signs warned of mines lying within a landscape which resembled Hiroshima after the US dropped nuclear weapon on the Japanese city in 1945. Agdam had not witnessed fighting during the Second Karabakh War and the destruction of everything was purposeful and vengefiul by the Armenian army which had occupied twenty percent of Azerbaijan for nearly three decades. Criminal looting was on such a scale that nopt a single window, door or roof was left remaining.

100 Azerbaijani civilians not wishing to wait, as well as Azerbaijani and Russian soldiers, have died as a result of the mines. The former occupied areas currently have the highest rate of accidents from mine explosions in the world. Every third casualty of these mines is a child. Azerbaijani officials are therefore seeking a phased return of IDPs when there is a “safe and secure environment”.

The former occupied territories are literally “carpets of land mines”, as they represent the most heavily mined region in the world. Besides Soviet era TM-62 anti-tank and PMN-2 anti-personnel mines, the region is also full of more recent unexploded ordinance, munitions and home-made bombs. The demining operation is led by the Azerbaijan National Agency for Mine Action (ANAMA), which now has around 15,000 personnel.

Russia and Turkey are also supporting the mine clearances. Currently, 100 Russian military personnel are using 13 IMP-52 mine detectors and Uran-6 robotic systems in the region. At the same time, 140 personnel from Turkey’s Special Mine Detection and Clearance Teams are using 20 MEMATT mine clearing systems. These are built using Armox-500T, the world’s strongest protection plate against explosions. Azerbaijan was the first country to purchase the MEMATT system, which was produced by the Turkish state company ASFAT and private military contractors.

During their nearly two decade occupation, Armenian forces planted mines along the contact line in order to prevent any attempt to retake the occupied lands. An ANAMA spokesperson said, “The Armenian army, while being pushed away, were putting mines almost everywhere in order to delay the Azerbaijani army”. In the Agdam region, because of the absence of fighting (Azerbaijani fores attacked in the south and north) the Armenian occupying forces had thirty days to lay additional mines before they withdrew under the November 2020 ceasefire agreement.

Demining and destroying unexploded ordinance are not the only jobs that need to be done in the region. During Armenia’s occupation of the seven districts surrounding Karabakh, much of the area’s infrastructure was destroyed, as this author and other journalists witnessed during our mid April visit. Structures related to Azerbaijani cultural and religious life were also purposefully destroyed in order to change the identity of the region. The grave and commemorative complex to well known nineteenth century Azerbaijani poetess Natavan Hurshudbani, in Agdam, was vandalised and partly destroye. Materials from destroyed buildings and cemeteries were often used to build new properties for Armenian settlers. In Agdam we witnessed a cemetery where the graves had been dug up, the remains removed and looted of even the smallest item, such as gold teeth. In addition, the retreating Armenian forces planted mines in civilian infrastructure, lamp posts, canals, road junctions, rural and urban paths, courtyard entrances, cemeteries and riverbanks with the aim of preventing a return to normal life.

Azerbaijan’s Ministry of Foreign Affairs has calculated that a colossal “927 libraries, 22 museums, 808 recreational venues, 4 theatres, 2 concert places, 8 cultural parks, 4 art galleries and 85 musical schools” were destroyed during the occupation. Despite this, UNESCO never once sent a mission to Karabakh and the seven districts to investigate this damage during the nearly two decades of occupation.

Armenia and the Karabakh separatist authorities have not signed the APMBC (Anti-Personnel Mine Ban Convention). Just before the recent war, the HALO Trust complained that the Nagorno-Karabakh authorities had provided it with no assistance in demining and concluded that there was no government strategy to clear the mines.

Armenia is adding to this legacy of indifference by refusing to provide maps of where it laid mines during the war and the retreat of its forces after the peace agreement. As a result, nobody outside of the country knows of the exact locations of all the minefields. The Azerbaijani prosecutor’s office has claimed that “all the rules were observed” by Baku with regards to cooperation on demining. The office even threatened to inform Interpol of the identities of the Armenian officers “who gave the order for mining” should they be found.

Azerbaijan appears willing to cooperate in a number of areas in order to cement the peace process. This includes in issues related to economics, energy and transportation. Despite this, the shock of defeat in Armenia, which nearly led to a military coup d’état against Prime Minister Nikol Pashinyan last month, is still preventing progress that would be beneficial to both sides. President Ilham Aliyev said on April 13th that whereas Azerbaijan had laid out concrete steps forward in rebuilding cooperation in economics, trade and energy towards a peace agreement, the Armenian side was silent and not responding and sending its own proposals or responding to those from Baku.

The resumption of economic, energy and transportation links would also assist Armenia in reducing its heavy dependence on Russia. This would give Yerevan a greater ability to pursue a more multi-vector foreign policy. This could prove advantageous for a country with few strategic resources compared to its neighbours.

Every time a mine explodes and civilians suffer, the peace process is damaged and potentially knocked off course. These events only encourage more distrust between Armenians and Azerbaijanis. Handing over mine maps would prove to be a significant step towards the normalisation of bilateral relations and the conclusion of a peace agreement ending four decades of conflict.

Taras Kuzio, a professor at the Department of Political Science, National University of Kyiv Mohyla Academy. His fourth book on this topic, Russian Nationalism and the Russian-Ukrainian War, is to be published by Routledge.