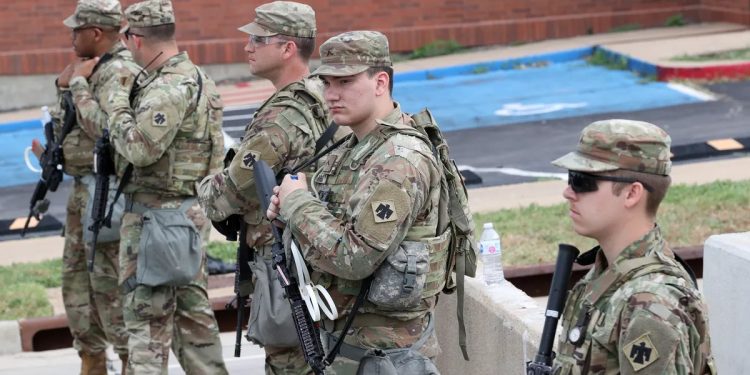 Members of the Oklahoma National Guard standing by in Tulsa in June of last year. Photo: Win McNamee/Getty Images

For 20 years, Oklahoma’s partnership with the republic of Azerbaijan is one of the prominent examples of the program.

The Oklahoma National Guard and Azerbaijan have been partners under the Department of Defense National Guard Bureau State Partnership Program since 2002.

As Azerbaijan’s ambassador to the U.S., Khazar Ibrahim, summed it up: “[O]ur cooperation with Oklahoma is also a serious contribution to overall Azerbaijan-U.S. partnership” with the “involvement of American companies in global energy and transportation projects in Azerbaijan being instrumental in ensuring Europe’s energy security and protecting key U.S. national interests.”

It’s genuinely encouraging that the State Partnership Program—such as Oklahoma’s partnership with Azerbaijan—has been growing over the past three decades.

The program started in the wake of the fall of the Soviet Union and continues to generate measurable benefits to partnerships around the world.

The State Partnership Program, which began with 13 partnerships in 1993, currently has 85 partnerships with more than 90 nations, including Azerbaijan, Romania, Uzbekistan, Paraguay, and Kosovo, with the National Guards in all of America’s states and territories, including the District of Columbia, taking part in the program.

The exchange paired Azeri officers with members of the Oklahoma National Guard’s Defense Cyber Operations Element, a joint Oklahoma Air and Army National Guard team dedicated to cybersecurity. This kind of strategic interactions between partners are welcome because cyberthreats, unlike conventional threats, are not limited by borders.

Lt. Col. Sharon McCarty, who leads the Oklahoma National Guard’s State Partnership Program, noted, “You can’t surge trust,” underscoring that “relationships develop over time, and it’s too late if you wait until a crisis to develop trust and confidence with your allies and partners.”

It’s notable that America’s engagement with Azerbaijan has been unambiguously expanding, with 2022 marking the 30th anniversary of diplomatic relations between the two nations.

From Washington’s foreign policy perspective, the strategic importance of the country has become more apparent. Its capital, Baku, is the largest port on the Caspian Sea and an important transportation hub for goods shipped between Europe and Central Asia.

Azerbaijan, the only country in the world that borders both Russia and Iran, proactively seeks to broaden its relations with the West as a balancing factor.

Over the past three decades, since Azerbaijan’s independence from the Soviet Union, the U.S.-Azerbaijan relationship has grown comprehensively in advancing energy security in Europe, combating transnational threats, and boosting bilateral trade and investment, among other policy priorities.

Yet more can and should be done as Azerbaijan moves forward. Washington can support this important partner in the Caspian Sea region by widening and deepening the frank, open, and forward-looking dialogue between the two countries on issues of mutual concern.

In what must be a long-term, strategic endeavor, America’s greater security and economic engagements at the state level—like Oklahoma’s pragmatic and strategic partnership with Azerbaijan—are the way forward and deserve further encouragement.

Anthony B. Kim is a research fellow in economic freedom at The Heritage Foundation, editor of the Index of Economic Freedom, and manager of global engagement for Heritage’s Margaret Thatcher Center for Freedom.