One of the most critical issues holding back peace and normalization in the South Caucasus is the fact that Turkish–Armenian relations have still not been normalized; that is, the borders between the two countries are closed, and official diplomatic relations have not been established. 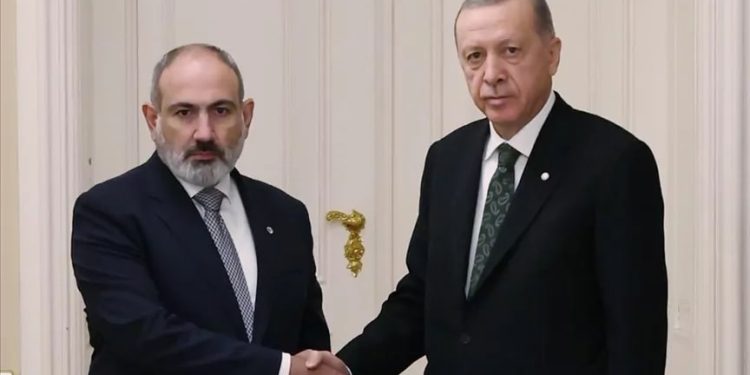 These diplomatic ties were not established after the collapse of the Soviet Union due to Armenia’s territorial claims against Turkey. Furthermore, in response to the Armenian occupation of Azerbaijan’s Kelbajar Province in 1993, Turkey closed its borders with Armenia in accordance with the United Nations treaty. However, after the liberation of some Azerbaijani lands from occupation in 2020, the Turkish-Armenian normalization process has gained momentum and made significant progress in a number of areas.

After the parties appointed special representatives for the normalization negotiations, the first meeting took place on January 14 in Moscow. During this meeting, the parties agreed to resume flights between the two countries, which started up in February 2022. A fourth meeting was held in Vienna on July 1, with a number of critical decisions being made. The delegations agreed to enable third-country citizens visiting both Turkey and Armenia to cross their shared land border, to commence direct air cargo trade between the two countries, and to discuss other possible concrete steps toward achieving the ultimate goal of fully normalized relations between Ankara and Yerevan (Mfa.gov.tr, July 1). Only a couple weeks after this gathering, the former Turkish special representative to Armenia, Serdar Kilic, traveled to the Kars region, near the Turkish–Armenian border, to complete necessary border checks (Panorama.am, July 25).

On July 11, Armenian Prime Minister Nikol Pashinyan called Turkish President Recep Tayyip Erdogan, during the Ramadan holiday, asking for an acceleration of the process (Tcbb.gov.tr, July 11). Furthermore, a senior Turkish diplomat, in a statement to the Turkish press in August 2022, remarked that the two countries have entered a new phase. In fulfilling the agreement reached by the special representatives, officials from the ministries of transport, trade and foreign affairs of both countries met in September to discuss the technical aspects of the next steps for the normalization process, as the status of the railways, highways and bridges on the border between the two countries remained unclear (Hurriyet.com.tr, September 12).

Ibrahim Kalın, Ankara’s presidential spokesperson, gave an interview to NTV on September 23, pointing out that Pashinyan has displayed a constructive attitude and done his part to ease the process along, despite some internal pressures (Hurriyet.com.tr, September 23). That same day, the news broke that, in August 2022, the Armenian side had handed over two members of the Kurdistan Workers’ Party (PKK), who had previously been detained in Armenia and later released, to the Turkish National Intelligence Organization. Although Armenian state officials denied the reports, the PKK’s political branch in Syria confirmed it and harshly criticized Pashinyan’s government as a result (Rudaw.net, September 26).

On October 6, the first-ever meeting between Pashinyan and Erdogan was held in Prague, and the leaders of Azerbaijan, Armenia and Turkey even met informally at the event. According to Erdogan, Yerevan has certain stipulations for direct cargo transportation, including by air. After these conditions have been met, talks will be held between both countries’ foreign ministers and special representatives (Trthaber.com, October 6).

According to media reports, the Armenian and Turkish authorities have held more than 500 phone calls in addition to the direct meetings regarding normalization. In these talks, instead of making assertive statements and causing disappointment, Turkey confirmed its desire to move toward the goal of normalization—albeit in a slow and deliberate manner. According to Turkish Foreign Minister Mevlut Cavusoglu, Ankara is aware of the domestic pressure exerted on the Pashinyan administration, and its aim is not to put Yerevan in a more difficult position (Daily Sabah, May 20).

Nevertheless, other Turkish officials have stated that the normalization process can only proceed in parallel with the normalization of Azerbaijani-Armenian relations. In other words, Turkish-Armenian relations cannot be normalized without a wider peace process in the South Caucasus. Cavusoglu openly stated that some hope to separate the two processes from each other, but this is impossible. During his recent visit to the Zangilan and Jabrayil regions of Azerbaijan, Erdogan stated that the two processes must run parallel to one another but pointed out that Armenia prioritizes opening its borders with Turkey over signing a peace treaty with Azerbaijan.

Moreover, normalization of Turkish-Armenian relations has become increasingly crucial as Russia’s position in the South Caucasus has weakened due to its war against Ukraine. Other countries, including France and Iran, believe that Russia has left a gap that will be filled by Turkey. For this reason, they consider the normalization process with Yerevan another measure by which Ankara can increase its regional influence.

However, recent statements from French President Emmanuel Macron—including laying sole blame on Azerbaijan for the conflict in Karabakh—will only serve to hinder the Azerbaijani-Armenian peace process, which is a critical node in the Turkish-Armenian normalization process (The EurAsian Times, September 30). At the same time, the Armenian diaspora communities in France and the United States are also vehemently opposed to the successful conclusion of this normalization. Meanwhile, the Iranian military conducted large-scale military drills on its border with Azerbaijan from October 17 to 20, and on October 21, Iranian Foreign Minister Hossein Amir-Abdollahian visited Armenia declaring, “We have common interests, opinions and concerns in the South Caucasus” (Armenpress.am, October 20).

Ultimately, the necessary political will and desire to normalize relations in the political and economic spheres are present in Ankara and Yerevan. In fact, the parties are actively eliminating technical obstacles and preparing for the day when their shared border will be opened. In this sense, the countries may be only one critical step away from full normalization of relations: the realization of a comprehensive Armenian-Azerbaijani peace agreement. In truth, fulfilling the terms of the Brussels agreements and opening the Zangezur Corridor, which Tehran strongly opposes, are the keys to achieving broad normalization in the South Caucasus, without which any such effort will be doomed to fail.