The inflexible and gruesome truth about the OSCE Minsk Group is that it is dying a long death, and its throes are protracted. Given the situation on the ground, all the principles and constructs elaborated under its auspices cannot be evoked and the entity itself has become the acme of insipid vacuity. 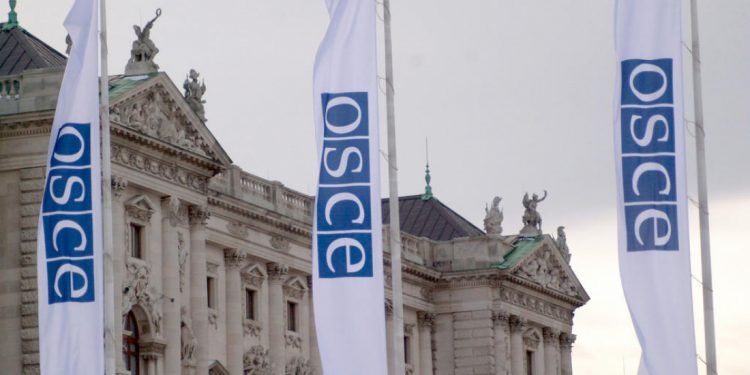 The OSCE Minsk Group has already reached the point subsequent to which “gradations of its passing away” are of no practical import. Save for the pseudo-defiant Armenian officials and some incorrigible apologists, no one talks about it in the real present sense, and rightly so.

However, there is also a question of procedural niceties that are somewhat shrouded in obscurity. It behoves a fair-minded discerning observer, not given to wishful thinking, to acknowledge that the organisation in question does still exist on paper.

The author of this piece has conscientiously and consistently referred to it as “misbegotten”, “beleaguered”, “obsolete”, “archaic”, “bankrupt”, “inert”, “impotent” or even “clinically dead”, but the appellatives have always fallen short of an ultimate verdict tantamount to an irreversible death warrant.

Two separate questions appear to be in need of clarification. The first is why its name crops up from time to time and what constitutes a very final and formal ‘no return’ moment that would have enabled the world at large to cut loose from being in two minds. Answers to these form two sides of one coin.

The OSCE Minsk Group and the question of the final status of the former Nagorno-Karabakh have always been interconnected, for the latter was the raison d’être of the former. The Second Karabakh War delivered a near-death blow to both. Thereafter, Azerbaijan has consistently refused to talk about the territorial status of the region, and suggested that the OSCE Minsk Group should redefine its mandate to remain relevant, which it has not.

Once Armenia officially agrees to discuss the Karabakh subject exclusively in terms of the rights and security of the Armenian population of the region inside Azerbaijan, denuded of a territorial status component, the Minsk Group will self-destruct or will be dissolved by its creator – the OSCE.

Prior to the 44-day war, the OSCE Minsk Group had been brain-dead, Azerbaijan’s victory in 2020 rendered it irrelevant, as it was deprived of its raison d’être – addressing the final status of the former Nagorno-Karabakh Autonomous Oblast; now, in the aftermath of the inception of the Ukrainian crisis and schism it has engendered between the West and Russia, it cannot perform a group activity, but it is still somewhat alive, at least, de jure.

In practical terms, the OSCE Minsk Group became an indispensable device in the hands of those who either wanted to eternalise the conflict and ensure its duration in perpetuity or eventually compel Azerbaijan to the fact of the occupation and yield to the territorial loss.

President Ilham Aliyev’s grim evaluation of the organisation’s 28-year-old endeavours explains only too well why Baku would not touch with a bargepole any suggestion on its remote involvement in the future peace process.

When I asked Paul Goble, former advisor to the US Secretary of State, “what should happen for the Minsk Group to be consigned to history”, he wisely reminded me that the last meeting of the League of Nations was convened in 1946, long after it ceased to perform any real function. In other words, an international organisation may continue to claim to be in existence long after its practical end.

In April, after Russian Foreign Minister Sergei Lavrov’s admission that the OSCE Minsk Group had been effectively cancelled by the West, namely the US and France, many wondered whether its death was “finally final”.

The feeling back then was that this should be considered as a clinical death warrant, if not more. However, in a strict legal sense, the entity in question was still alive and would continue to be formally in existence until the point of self-dissolution or a coup de grâce of some sort.

Today, the situation is slightly different, as it is of lesser import whether the OSCE Minsk Group has been de jure abandoned or not. What matters today is the extent to which Yerevan is prepared to move from “the thinking along the lines of the territorial status” to “the security and rights of Armenians inside Azerbaijan”.

Pashinyan has vacillated on this from December 2021 onwards. Paul Goble, for instance, is of the opinion that “what the Armenian Prime Minister says occasionally is welcome, but he does not have a sufficient amount of strength” to take practical steps.

Today’s Azerbaijani-Armenian peace process, both within the Moscow and Brussels formats, does not touch upon the status issue. The interstate normalisation facilitates two separate realms – the demarcation of the delimitation of the state border and the unblocking of communications. It is possible to achieve some progress in both of these dimensions, whilst leaving the issues related to the Armenian inhabitants of Karabakh aside for the time being.

Some commentators believe that, before the 2020 war, the OSCE Minsk Group was in a privileged position to mediate the conflict, but now the whole discourse has been fragmented.

Laurence Broers of London-based Conciliation Resources contends that there are three separate tracks, namely (i) the Moscow-mediated process with a heavy focus on security, due to the Russian peacekeepers’ presence in Karabakh, (ii) the Brussels-led line concentrating on technical-economic matters, and (iii) the OSCE Minsk Group dealing with the old final status issue.

Paul Goble agreed with me on this, but also stated that the question of the status of the Armenian community inside Azerbaijan will resurface periodically, and whenever this happens, people will think of the OSCE Minsk Group, as it was the only entity prepared to talk about that very issue.

However much Azerbaijan and Armenia may exclusively focus on interstate issues for some time, a peace treaty will require the Armenian recognition of Azerbaijani territorial integrity with Karabakh included and Baku will be expected to guarantee the security and rights of those unfortunate Armenians residing in the region. Failure to achieve progress there could give rise to all sorts of possibilities, including a new stalemate and even a renewed widescale escalation, which would be detrimental to all.