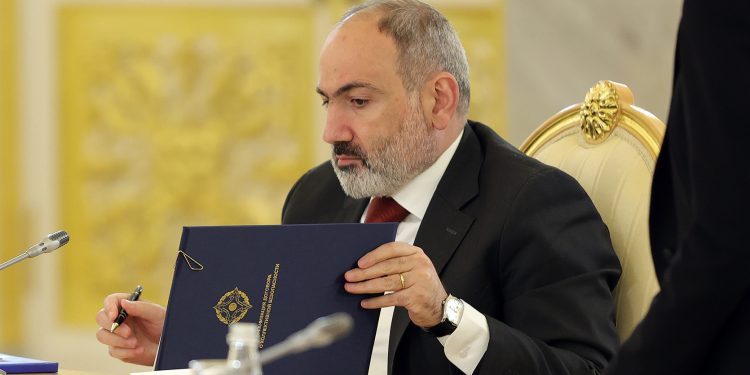 Pashinyan said at the CSTO Collective Security Council session that the CSTO’s political assessment of Azerbaijan’s actions against Armenia is important, the government’s press service said.

“The political assessment is necessary, above all, from a moral point of view, as this should be a logical manifestation of allied relations. Of course, it is also important in terms of restoring the territorial integrity of our country, but this aspiration in itself does not mean a military interference,” Pashinyan said.

Armenia proposes accelerating the necessary political and diplomatic work with the Azerbaijani party by the CSTO Collective Security Council’s decision in order to immediately and unconditionally withdraw Azerbaijani troops from the sovereign territory of Armenia to their initial positions as of May 11, 2021, he said.

“This position is important not only to restore the territorial integrity of the Republic of Armenia, but also to deter Azerbaijan from further aggressive actions against our country. The fact that the risk of a new aggression by Azerbaijan against the territorial integrity of Armenia remains was reported by CSTO Secretary General Stanislav Vasilyevich Zas at an extraordinary session of the Collective Security Council on October 28 of this year. Under such circumstances, the absence of a clear political assessment of the situation and the failure to make the above-mentioned decision may not only mean that the CSTO abandons its allied commitments, but could also be interpreted by Azerbaijan as a green light for further aggression against Armenia,” the Armenian prime minister said.

He noted that this is not only at odds with the letter, but also with the spirit and meaning of the CSTO’s fundamental documents.

“Therefore, given that, dear colleagues, at the moment I believe that the draft of the CSTO Collective Security Council’s Declaration and that on joint assistance measures to the Republic of Armenia submitted for signing is not fully elaborated, and in this edition, with all due respect, I am not ready to sign these documents,” the Armenian prime minister said.