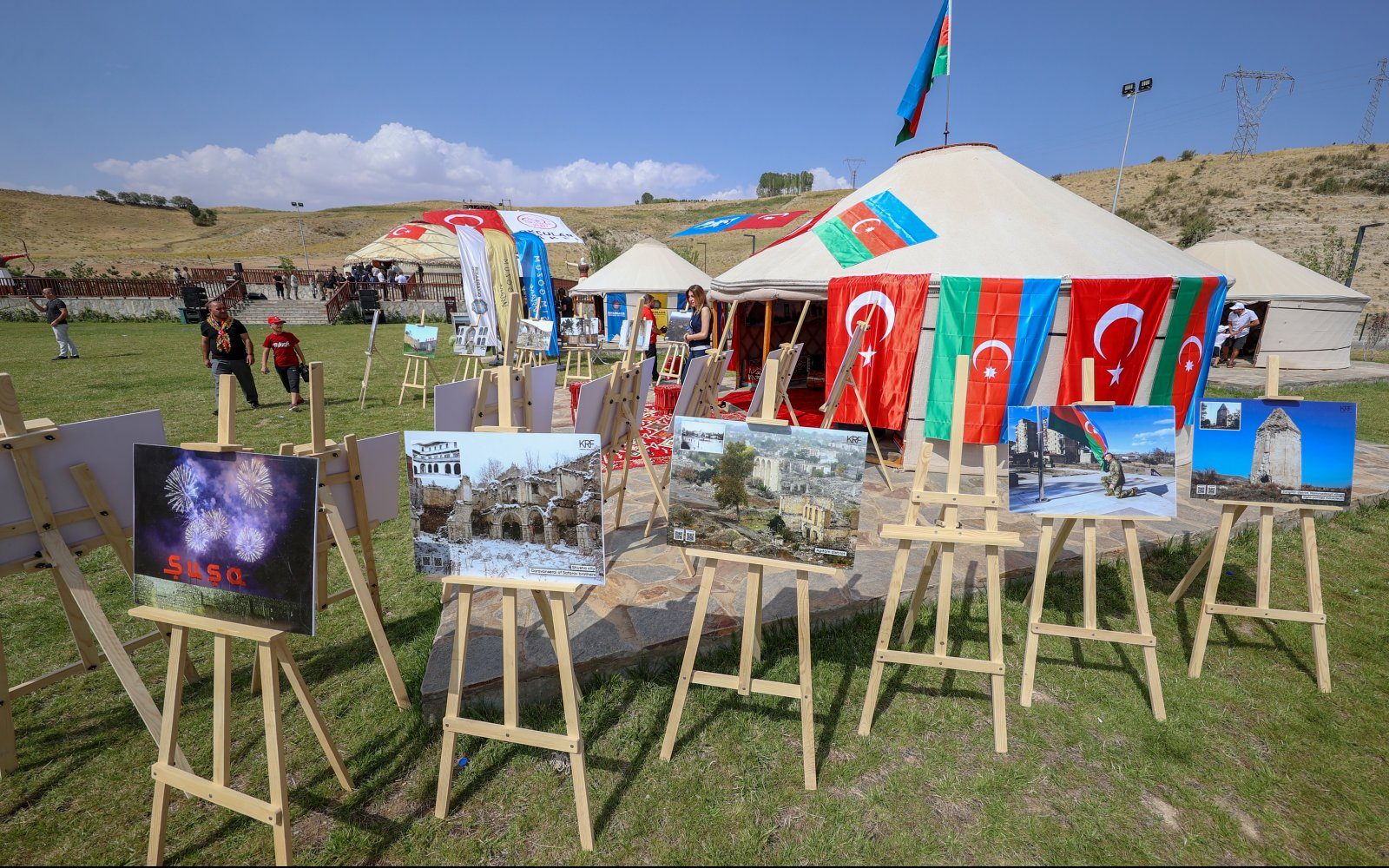 People commemorate Azerbaijan's victory in the Second Karabakh War with an exhibition in an event that is organized to mark the 951st anniversary of the Battle of Malazgirt in Bitlis, Türkiye, Aug. 23, 2022. (AA Photo)

The Second Karabakh War caused significant losses in the South Caucasus but also created opportunities for new regional cooperation and peace. The Nov. 10, 2020 trilateral declaration signed right after the war paved the way for the opening of regional transportation links, the delimitation and demarcation of national borders, and the signing of a peace agreement between the warring parties. Meanwhile, the concrete proposal for regional peace and cooperation with Azerbaijan, Armenian Prime Minister Nikol Pashinian’s victory over the radicals in the June 20, 2021 parliamentary elections and the failure of Armenian opposition demonstrations against the peace talks all provided some hope for peace in the South Caucasus.

Although hopes for normalization between the two countries have persisted, the decisions made in Moscow, Sochi and Brussels during the leaders’ meetings have not been implemented and preconditions have been introduced. Nevertheless, the international community expects that the parties fulfill the conditions of the agreements reached; for example, contrary to the tripartite declaration of Nov. 10, the Armenian Armed Forces have still not left the Karabakh region of Azerbaijan. Moreover, they have provocatively refused to leave the Lachin corridor, despite the alternative road being finished, and have caused delays by introducing various preconditions for the opening of regional communication and transportation lines and the delimitation and demarcation of borders.

The events around the Lachin corridor at the beginning of August in particular show how fragile the peace in the region is, and this is clearly due to the non-fulfillment of the agreements reached earlier. The Azerbaijani side stated that the alternative road was completed in accordance with the statement of Nov. 10, 2020 and requested that the Russian peacekeeping troops and Armenians leave the region by Aug. 5. During a recent interview, President Ilham Aliyev stated that Armenians living in Karabakh asked Azerbaijan to give them until the end of August and Azerbaijan agreed to extend the deadline to Aug. 25.

According to Article 6 of the tripartite declaration, an alternative route to the Lachin road between Karabakh and Armenia was to be built and Russian peacekeepers were to relocate from the Lachin corridor to that new road within three years. In accordance with the declaration, Azerbaijan built this alternative road and demanded the Armenians use it. The Russian peacekeepers agreed to relocate to the alternative route and warned Armenians living in Zabukh and Lachin to leave the region by Aug. 25. According to unofficial news sources, Azerbaijan offered these Armenians the right to stay in Lachin and Zabukh if they accepted Azerbaijani citizenship. Instead, homes and forests are being burned by the Armenians who illegally settled in the city of Lachin city and the villages of Sus and Zabukh.

Meanwhile, Armenia obstructs the implementation of the agreement and tries to portray Azerbaijan as a violator of human rights. The city of Lachin and its villages were occupied by the Armenian Armed Forces in May 1992 and since 2013, with the support of the Tufenkian Foundation, Armenians from Lebanon and Syria moved to the region in violation of the Geneva Convention, which is considered a war crime. However, the Armenian side presents the Armenians living there as the local population even though they illegally settled in the region.

Recently, Armenian armed groups resisted withdrawing from Lachin and killed an Azerbaijani soldier. This incident brought up a second issue: the removal of armed Armenians in the region where Russian peacekeeping troops are stationed in Karabakh. However, the Armenian side resists their removal. According to Article 4 of the trilateral declaration, the Armenian Armed Forces were to leave in parallel with the Russian peacekeeping troops arriving in the region. Unfortunately, according to official news, hundreds of them left the region only after Azerbaijan’s forces launched Operation Revenge.

Meanwhile, Pashinian opposes the expulsion of armed Armenians, citing non-existent conditions in the Nov. 10 agreement. He states that these armed forces emerged because Azerbaijan refused to give an international mandate to Russian peacekeeping troops. In putting forward a condition that is not in the tripartite declaration, Pashinian admits that the conditions of the declaration have still not been fulfilled by Armenia and that these armed groups are illegal according to international law. A number of officers in the so-called “defense army of the Armenian people” are actually the old groups from the First Karabakh War who caused the deaths of 30,000 people and the expulsion of more than a million people from the region.

Armenia argues that if its armed groups withdraw from the Azerbaijani territory, Azerbaijan will carry out ethnic cleansing against the Armenians living in Karabakh. This argument is untrue from two points of view. Firstly, even though Armenian forces attacked civilians in Ganja and Barda with missiles during the Second Karabakh War, Azerbaijan refrained from attacking Armenian civilians. A small number of civilian casualties (50) in the Second Karabakh War attests to the fact that Azerbaijan’s armed forces operated with precision. Aliyev stated that Azerbaijan would not attack civilians or fight occupants on the front line. In a recent interview, Aliyev stated that Armenians living in Karabakh are citizens of Azerbaijan and their rights will be protected according to the country’s constitution. “But we will not grant any special status for them and this is the best way for all of us. Because a new status for Armenians living in Karabakh means new wars in the region.” In fact, Armenians had autonomy in Karabakh until 1991 but the nationalist elite opted for secession and unification with Armenia.

Secondly, during the Second Karabakh War, the Azerbaijani forces stopped at the threshold of Khankendi and did not enter the city. If they wished, they could have done so but because of the high likelihood of a humanitarian crisis, they refrained. Now, some two years after the war, the Azerbaijani military is face to face with Armenian villages in many places, whether on the Armenian border or in the regions where Russian peacekeeping troops are temporarily deployed in Karabakh. Even during this period, there have been clashes between the Armenian forces and the Azerbaijani army. However, no Armenian civilians have been killed or targeted so far. On the contrary, Armenia carried out mass mining in the liberated territories of Azerbaijan and, since the end of the war, more than 240 Azerbaijani citizens have been killed or injured due to explosions.

The peace process should be underpinned by concrete measures without wasting further time while discourses that can harm the implementation of the agreements should be avoided. In the current situation, Azerbaijan is using its military and diplomatic power to fulfill the terms of the agreement and to ensure peace and cooperation in the region. In contrast, Armenia is pursuing psychological warfare, creating a victim narrative to delay agreements and seeking international support for the unrealistic rhetoric it has created.

The tensions between Azerbaijan and Armenia despite the ongoing peace negotiations between the parties are an indication that the process is fragile. Delays and the non-implementation of terms of the agreements could lead to new conflicts. That is why all regional and non-regional actors are awaiting the fulfillment of the agreements already reached between the parties.