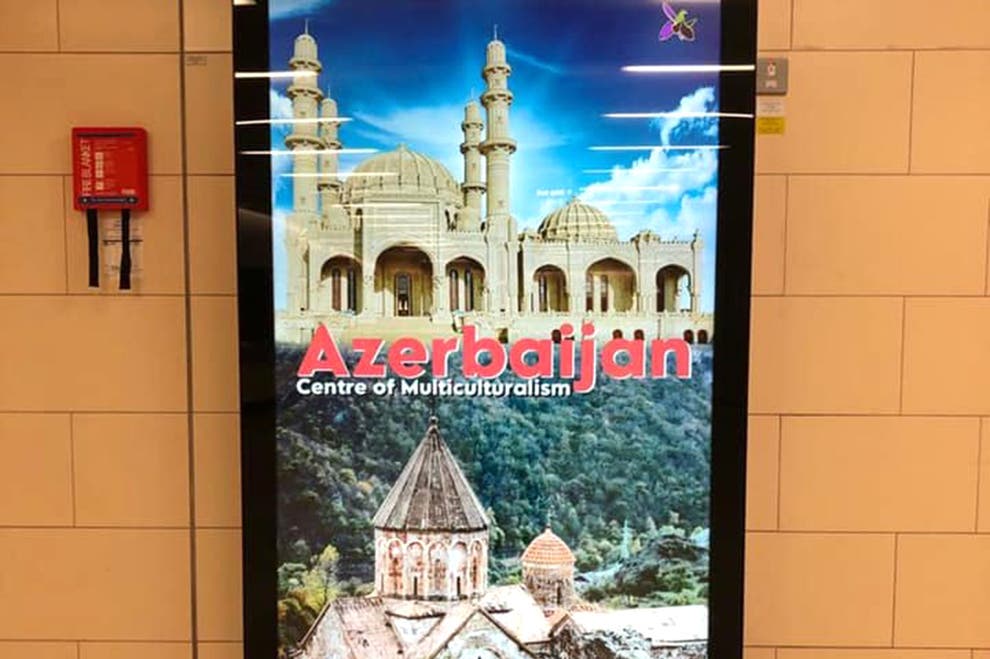 Tube station posters promoting a disputed enclave in the Caucuses as a tourist destination have been taken down following complaints from Armenians.

The digital adverts showed various cultural landmarks and included slogans such as “Shusha, Karabakh – Cultural Capital of Azerbaijan” and “Azerbaijan, centre of multiculturalism”.

They could be seen at up to 50 underground and mainline train stations across London last week but have since been removed after protests from the Armenian National Committee UK, which criticised them as “cultural revisionism” and “propaganda”.

In a Facebook post promoting the posters last week, the Azerbaijan Embassy in the UK said it had given financial and technical support for the adverts “within the framework of the campaign to deliver Azerbaijani truths to the world”.

A territorial dispute over Nagorno-Karabakh was reignited last year when Azerbaijani forces and ethnic Armenians fought in a war that claimed thousands of lives. The six-week conflict was ended by a Russia-brokered peace deal in November.

The region is internationally recognised as Azerbaijani but has been run by ethnic Armenians since 1994. It includes the city of Shusha – known as Shushi in Armenian – which dates back to the 18th century and was a mountain resort during the Soviet era.

The ANC complained about the letters to Transport for London’s (TfL) director for communication Vernon Everitt.

An ANC spokesperson said: “Their attempt to present themselves as a multicultural and tolerant society are absurd considering Armenians are not allowed into the country, and yet they are trying to appropriate Armenian culture as their own.”

TfL confirmed the posters were removed from 46 of its underground stations following the complaint made to them over the weekend.

A spokesperson said: “This digital advert was approved by our media partner Global on behalf of TfL, as being in line with TfL’s advertising policy.

“However, following feedback, it has now been removed from our network.”

It is understood the Armenian embassy in London has written to the Advertising Standards Authority (ASA) about the adverts.

An ASA spokesperson said: “We received complaints over the weekend and are currently assessing them.”

The Standard contacted the Azerbaijani embassy in London for comment but has not yet received a response.