Robert Menendez did not know the 50 reasons not to marry an Armenian woman, but it is too late

Senator Robert Menendez. To those of us more or less versed in international politics, particularly when it comes to Azerbaijan, this name is more than familiar. 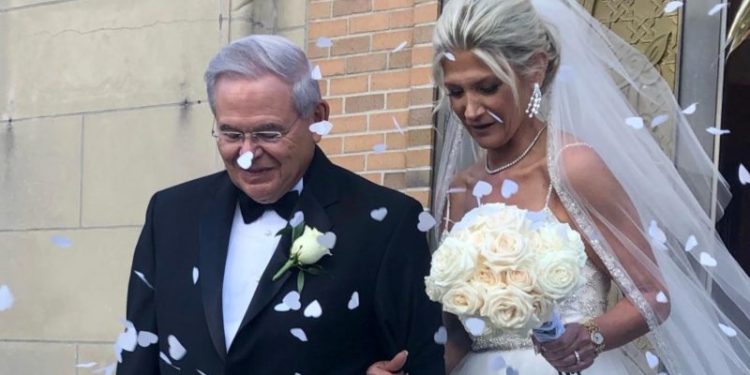 US Senator Bob Menendez and his wife Nadine Arslanian

As we know, all is fair in politics, that is why crooked politicians with stained souls can come across as angels. Except their halos turn on and off at will. And a rather unsightly story can run like a red thread through the sordid biography of not only Menendez, but of his family as well. But before we get to the cherry on top, let’s try the cake itself.

Robert Menendez went so far in his fervent advocacy for Armenia that he got burned on his family life. How did Menendez singe himself while defending Armenian values? A few days ago, he criticized US policy toward Azerbaijan. He urged the US Senate to recognize Azerbaijan as the aggressor. According to him, the United States has done nothing to verify the evidence of “Azerbaijan’s use of prohibited cluster munitions and white phosphorus during the 44-day war”.

The best response to the hysterical remarks made by Menendez, for whom Armenian money is more important than American pride, came from Karen Donfried, Assistant Secretary of State for European and Eurasian Affairs, at the Senate Foreign Relations Committee.

“Supporting Azerbaijan is in our national security interest,” she said.

And after all these fireworks for “justice” with an Armenian twist, the relevant US agencies asked themselves, “Why is this happening?”

As banal as it may sound, the US priority is neither the rights of Armenians, not infringed upon by anyone, nor “Artsakh”. Americans are practical people and every penny counts. This is why, having sold the notorious democracy for “thirty pieces of silver”, the Menendezes are trying to save face.

It did not work. He was let down by his wife. Menendez’s wife, as it turned out, is addicted to a life of luxury. And while Robert Menendez bent over backwards, defending the “poor Artsakh people”, his wife Nadine Arslanian was making up for the physical damage. No, she did not come up with any special fraud schemes, nor did she rob or kill anyone. Menendez’s wife took an easier route: she accepted bribes.

The US Attorney’s Office is now investigating whether Nadine Arslanian, wife of Senator Robert Menendez, accepted gifts and favors as bribes from certain individuals.

Isn’t Menendez’s lobbying for Armenian rights reminiscent of not so ancient history? The parallels are obvious. Mikhail and Raisa Gorbachev = Robert Menendez and Nadine Arslanian. Gorbachev, the first and the last president of the USSR, did Raisa Gorbacheva’s bidding, while the latter could not resist Armenian handouts, and he brought down the Soviet Union. Today Menendez is trying to cause a rift between the United States and Azerbaijan. But Menendez has failed. The US law enforcement is uncompromising about bribery. Neither his office nor his wife will help him here.

What is interesting, however, is that Menendez could not have been unaware of his wife’s financial dealings (not to mention his own). How could he bluff against aces holding, in gambling terms, two sixes and sevens? A woman is indeed a great force who can shut anyone up. But this woman shut Menendez himself up…