Russia builds up military forces on its border with Ukraine, a dearth of Pentagon nominees from Biden rankles Congress, and what the U.S. military can learn from drone warfare in the Azerbaijan-Armenia conflict. 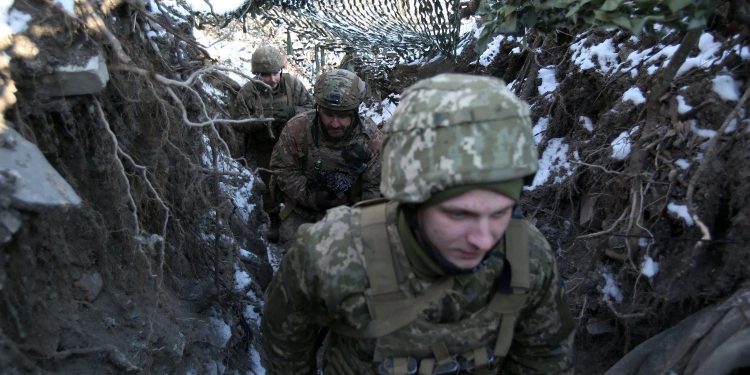 Ukrainian servicemen stand in position on the front line with Russia-backed separatists in the Donetsk region on Feb. 16. ANATOLII STEPANOV/AFP VIA GETTY IMAGES

A Not-So-Frozen Conflict Heats Up

After years of uneasy stalemate, Ukrainian and Western officials are raising alarm bells about a build-up of Russian forces near the border.

On Wednesday, U.S. Secretary of State Antony Blinken spoke with his Ukrainian counterpart about the situation, while Gen. Mark Milley, the chairman of the Joint Chiefs of Staff, called top military leaders in both Ukraine and Russia. An estimated 4,000 Russian troops have been dispatched to the border with the Ukraine, according to the New York Times, prompting the U.S. military’s Europe command to raise its watch level of the crisis to the highest possible level.

Does this spell (renewed) all-out war? It’s hard to say, and likely too soon to tell. Russia recently conducted a military exercise in the region and announced last week that it would permanently base an airborne regiment in Crimea, which experts say could account for some, but not all, of the recent troop movements.

“They are conducting a sizable deployment, and in a manner intended to be visible, but this so far does not appear to be the sort of force size one would expect for an invasion of Kherson Oblast [the Ukrainian region opposite Crimea] or a large-scale operation along those lines,” said Michael Kofman, a senior research scientist with CNA. “There is a host of other activity along Ukraine’s borders, which consequently raises questions about intentions,” he added.

That, combined with a flare-up in fighting in eastern Ukraine between the military and Russian-backed separatists, is stoking a lot of unease in Washington and European capitals. But Kofman cautioned against alarmism. “To me, it does not appear that Russia is positioning itself for an imminent invasion,” he said, adding that the build-up was more likely an effort to coerce Ukraine. Ukrainian President Volodymyr Zelensky called the actions “muscle-flexing” in a Russian attempt to raise pressure amid stalled peace talks.

Peace talks going nowhere fast. Efforts to resolve the conflict, which has killed 14,000 people since it broke out in 2014, have struggled to get off the ground. The Minsk agreement, negotiated in the Belarusian capital in 2015, brought the worst of the fighting to an end, but disagreements over its implementation have allowed the conflict to simmer. Over the past year, Moscow and its regional proxies have stepped up efforts to issue passports to residents in Russian-occupied eastern Ukraine, in a bid to increase their leverage over Kyiv.

Biden’s in a bind. Former U.S. President Donald Trump’s efforts to use Ukraine to gin up dirt on his political opponent Joe Biden made Kyiv, through no fault of its own, a political hot potato in Washington. Since he took office as president, Biden has kept his distance and has yet to have a phone call with his Ukrainian counterpart.

Some are calling on the Biden administration to push back harder on Russia. “The key point is that this isn’t out of nowhere. Over the last month, you’ve seen a real escalation in violence in the Donbass, and you haven’t seen a lot from the administration out of that,” a former senior Trump administration official told Security Brief. “[Putin] pushes until he hits something hard, and he hasn’t hit anything hard yet.”

Still, NATO should brace for the worst. NATO doesn’t have a direct role to play in Ukraine’s conflict beyond providing political support to Kyiv (while allied countries provide training, equipment, and weapons). But it should be ready for crisis response, says Christopher Skaluba, a former Defense Department official now at the Atlantic Council.

How about that pivot to Asia? The specter of renewed fighting in Ukraine is an unwelcome, poorly timed reminder that Moscow might have something to say about Washington’s long-planned pivot to Asia, which has enough challenges. Washington is pulling forces from the Middle East to reinforce Asia, even as Europe is on edge. While most analysts agree that an all-out conflict between Russia and NATO members is very unlikely, the conflict in Ukraine is a reminder that “a quarrel in a faraway country” often ends poorly.