Russia marches on Ukraine with the help of France, Germany, and Italy

The European Union now demands that Russia be properly punished. The very same Russia to which it supplied arms in violation of the EU's own embargo after the annexation of Crimea. 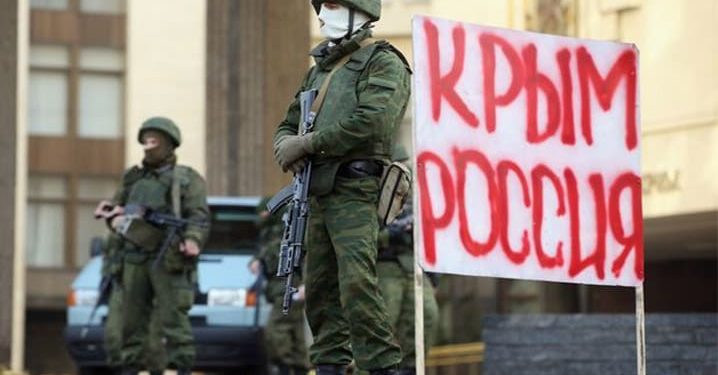 Vladimir Zelenskyy is absolutely right when he says that if Moscow had faced this kind of large-scale global condemnation of its actions back when it annexed Crimea in 2014, today’s tragedy in Ukraine might well not have happened.

But it did not happen at that time. Europe flatly refused to think through the dangerous and far-reaching consequences of Moscow’s aggression against its closest neighbor. And although in July 2014 the European Union imposed an embargo prohibiting “direct or indirect sale, supply, transfer or export of arms and related materiel of all types, including weapons and ammunition, military vehicles and equipment, paramilitary equipment, and spare parts”, to Russia, 10 EU Member States simply ignored this decision and supplied Moscow with €346 million worth of armaments from 2015 to 2020.

The top three suppliers are Paris, Berlin and Rome.

France sold €152 million worth of military equipment to Russia. The figure, confirmed by an Investigate Europe (IE) report, puts it far ahead of its neighbors, with its share in European arms exports to Russia at 44%. 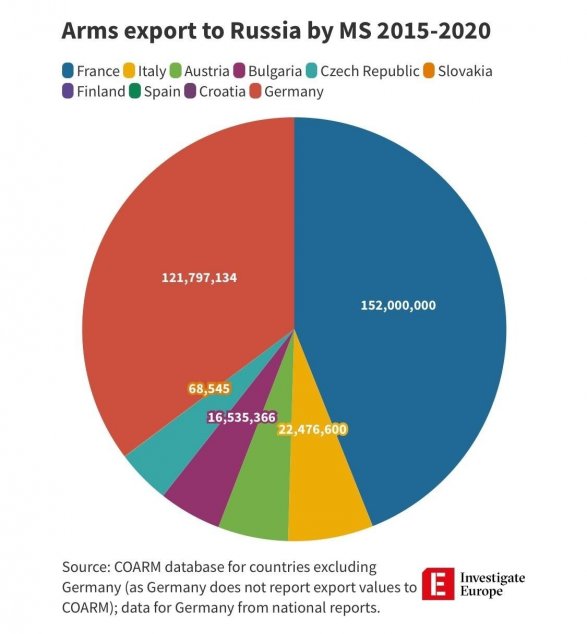 French exports also include thermal imaging cameras for more than 1,000 Russian tanks, as well as navigation systems and infrared detectors for fighter jets and combat helicopters. This equipment can now be found onboard the land vehicles, fighters and helicopters that are currently destroying Ukraine.

Germany exported €121.8 million worth of military equipment to Russia, which represents 35% of all EU arms exports to Russia. The exports consisted mainly of icebreaker vessels, but also included rifles and “special protection” vehicles that were sent to Moscow.

Italy sold €22.5 million worth of military equipment to Russia between 2015 and 2020. The first major contract signed with Russia was in 2015, when Matteo Renzi’s government authorized the Italian company Iveco to sell €25 million worth of land vehicles to Russia. But don’t let this rather modest amount mislead you.

Rome’s real contribution to increasing the offensive capabilities of the Russian army is much more significant. The Lince (Lynx) tactical vehicles, which are actively used in the fighting in Ukraine, were assembled at one of Iveco’s three plants in Russia, from Italian parts.

The other countries, such as the Czech Republic, Bulgaria, and Austria, were not seen supplying large quantities. But they were steadily selling Moscow various engines and other components for UAVs and fighter jets, as well as equipment for the navy during this period.

Of course, we should not assume that the Russian military would not exist as a foreign policy tool if it were not for European help. Even without foreign assistance Moscow spends massive amounts of money on its armed forces, which is a heavy burden on the Russian economy. That is not the point. European supplies gave Russia access to modern military technology and weaponry, allowing it to modernize its army.

This is the first point. The second is that this circumvention of the EU’s decision allowed the Kremlin to believe that in case of another attack on Ukraine’s territorial integrity, Europe would turn a blind eye and continue to sell Moscow everything, including weapons and cutting-edge technology.

So, when they rail about Russia’s aggression, Western politicians should also talk about their own contribution to it. Only time can tell whether Europe will learn from this experience.