There is a new round of provocations in the "area of irresponsibility" of the Russian peacekeeping forces. And new provocative statements are being made by the "peacekeepers" and the Russian Defense Ministry themselves. 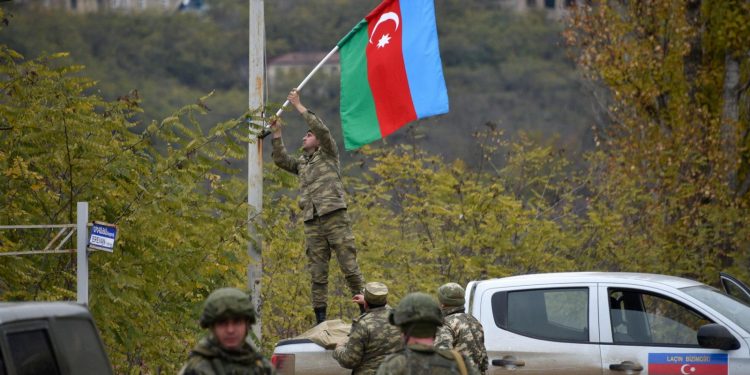 According to the latest bulletin on the activity of the Russian peacekeeping forces, “the Armed Forces of the Republic of Azerbaijan entered the area of responsibility of the Russian peacekeeping forces in the territory of Nagorno Karabakh from March 24 to 25, violating the trilateral statement of the leaders of Russia, Azerbaijan and Armenia of November 9, 2020, and set up an observation post. Four strikes were delivered by Bayraktar-TB 2 type unmanned aerial vehicles against units of the Nagorno-Karabakh armed groups in the area of the settlement of FURUKH. The command of the Russian peacekeeping forces is currently taking steps to resolve the situation and move the troops back to their original positions. An appeal for the withdrawal of troops has been sent to the Azerbaijani side.”

First of all, we should ask the Russian Defense Ministry: what are these “units of the Nagorno-Karabakh armed groups”? According to the trilateral statement co-signed by Russian President Vladimir Putin, all Armenian military groups must either be disarmed and disbanded or withdrawn from Karabakh. So what are these “units” mentioned in the bulletin? The authors of the press release and the peacekeeping command essentially let the truth slip. They admitted that one of the most important paragraphs of the Trilateral statement is not being implemented by the Armenian and Russian sides. These kinds of documents, in case anyone has forgotten, are not a restaurant menu, where you can choose items to your liking—they are either implemented or not. And if Azerbaijan is forced to work on the implementation of the paragraph about the disarmament of Armenian illegal armed groups on its own in light of the obvious inaction of the Russian peacekeeping forces, accusing Baku of violating the trilateral statement is at the very least unreasonable and unconvincing.

Besides, the command of the Russian peacekeeping forces is supposed to know that the line of demarcation drawn on the map in Karabakh is not the state border. Plus, if we compare the Russian peacekeeping forces’ location maps the as posted on the site of the Russian Defense Ministry, we can’t help noticing the lines of demarcation change there. And it is certainly useful to recall the events of December 2020, or more precisely the incident with the Armenian “zinvors” infiltrating the forests of Khojavend District. Recall that an unknown “appendix” leading to two villages of Khojavend District appeared at that time on the map of the activities of the Russian peacekeeping forces. Baku voiced outrage then, and Moscow corrected the map, but experts, including those at Minval.az, cautioned that this appendix on the map also creates a precedent. The maps can now be corrected in both directions.

Lastly, Moscow should be careful about calling for a “withdrawal of troops”. The Armed Forces of Azerbaijan are on Azerbaijani territory, and it is not, to put it mildly, for the Arbat Military District to give them orders on where to move, where to enter and where to withdraw from.

It is possible, of course, that this press release of the Russian Defense Ministry will cause a rush of joy among the Karabakh separatists, giving them a new reason for a hysterical show. Forgetting the “gas troubles”, Araik Harutyunyan staged a new farce: he signed a “decree” according to which, under martial law declared in the territory of the so-called “Republic of Artsakh” (the quotation marks here and further are ours—Minval), the freedom of assembly is limited, strikes are prohibited, “work of organizations involved in propaganda or other activities against the defense capability and security of the ‘Republic of Artsakh’ is suspended”.

First of all, martial law in Azerbaijan is introduced in accordance with the law and by the legitimate authorities, that is, by the decree of the President of Azerbaijan, exactly as it happened in September 2020, after Armenia unleashed the second war in Karabakh. Impostors like Araik Harutyunyan have no legal authority either to introduce or lift martial law or to regulate its regime. With all the ensuing consequences in the field of legal qualification, including usurpation of power. In addition, this piece of paper signed by Araik Harutyunyan is yet another accusation against the Russian peacekeeping forces for failing to implement the provisions of the Trilateral Statement. Indeed, what forces will implement this “martial law” if there should be no Armenian armed groups in Karabakh? But if Araik Harutyunyan feels confident enough to declare martial law, the Russian peacekeeping forces have something to think about.

And finally, having won a round of applause from a handful of Armenian separatists, the command of the Russian peacekeeping forces, and even more so the leadership of the Defense Ministry, must be aware of the risks this entails for the relations with Azerbaijan. One can, of course, assume that the military and political failure in Ukraine is very painful for the top brass of the Russian Federation. Official uniformed spokesmen may say phrases like “everything is going according to plan, we had no intention of capturing Kyiv and Kharkiv” and so on with a straight face, but what is happening in Ukraine today is a deafening fiasco of the Russian Federation. No wonder they want to “show their teeth” at a time like this, to demonstrate their strength, etc. But if the Arbat Military District decided that this piece of land is the best place for such a demonstration, they are in for a disappointment: it would be very reckless to regard Azerbaijan as a “soft target”. To ignite another “problem”, this time with Azerbaijan, in addition to all the “bruises and bumps” on the Ukrainian front is extremely unwise. And yes, the reaction to such attacks always resembles the proverbial “iceberg”, with its main part usually staying “under water” and not voiced at the official level. But this does not mean that it does not exist and is not dangerous to run into.