Russian troops in Kazakhstan: No good news for Azerbaijan and Georgia

As one of the founders of the Eurasian Economic Union, Nazarbayev knew perfectly well that Russia is a double-edged sword, and coming too close to it can be dangerous to one's health. 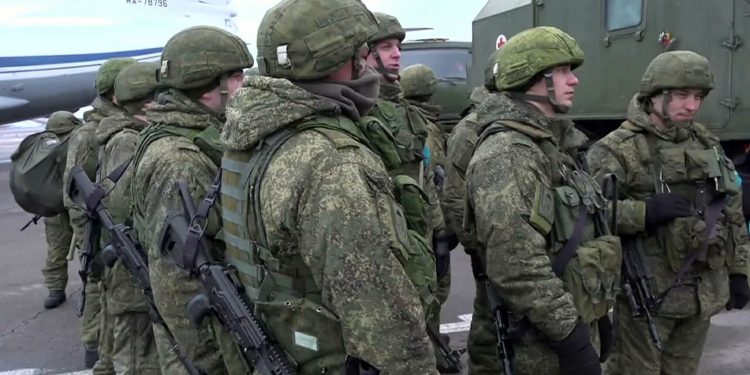 In the 1960s, the era of hippies, there was a minor and now almost forgotten musical group in the US—Buffalo Springfield. There was nothing remarkable about the creative career of this band, except perhaps the song “For What It’s Worth”, which is probably still remembered by music lovers because it was used in the soundtrack of the great Hollywood movie Lord of War.

Now, there is a line in the song “For What It’s Worth” that says: “Nobody’s right if everybody’s wrong”, which—life is full of surprises!—perfectly captures the essence of the events taking place in Kazakhstan these days.

As a rule, outbursts of social discontent, which we observe on the city streets of this country, look black and white, without any shades. That is, either “the masses rose against the evil regime that has been oppressing common working people for years” or, on the contrary, “terrorists and bandits are trying to overthrow the legitimate government and plunge the country into chaos”.

As the saying goes, there is no in-between.

Alas, it is human nature to seek out someone right and good in order to support them against someone wrong and bad. It can’t be helped: people need a virtuous hero who changes the world for the better.

But none of this applies to Kazakhstan today.

Obviously, without knowing the details of the situation we cannot judge it adequately. Not to mention the fact that someone will certainly say: “Who are you to talk about Kazakhstan? Have you ever been there? What do you know about this country?”

There is logic in these questions. Personally, I have been to Kazakhstan only once. I spent three days in Astana (I am not sure how politically correct it is not to call the capital of Kazakhstan Nur-Sultan), the place has nothing to do with the real Kazakhstan. It is a very beautiful, artificially created showcase of a city, and judging life in the real Kazakhstani cities like Karaganda, Shymkent or Pavlodar by it is simply the height of absurdity. The gap between them is even wider than between Moscow and the Russian provinces, even though I have always thought that it’s simply impossible.

True, we are not Kazakhs and we do not know all intricacies of the tragedy that befell their country. But common sense is common for everyone. And it dictates that pogroms, gang violence and looting negate and practically destroy any, even the most righteous and hard-earned, protest.

It doesn’t matter who has been looting and killing on the streets of Kazakhstani cities these days, the protesters themselves or some “hired instigators”.  When you take to the streets to protest, and next to you people are being killed, store windows are being smashed and cars are being burned, while you and your fellow protesters are unable, unwilling or simply afraid to stop the thugs and instigators, then it is time to decide whether you prefer power in the hands of the government you are unhappy with, or power in the hands of those you cannot handle.

If the protesters lack the self-organization and cohesion to stop the social protest from devolving into an outright gang pogrom, then they should just go home and protect their families.

Yes, doubling the price of liquefied gas is wrong. Actually, given the global dynamics of rising gas prices, the price should have gone up three or four times. Of course, in Kazakhstan, a gas-producing country, fuel should be much cheaper than, say, in Georgia, which is totally dependent on imports.

But what is 120 tenge per liter of liquefied gas? 27 US cents. In Georgia, by the way, it costs 60-65 cents. And if some economist would be kind enough to compare the level of income of an average Kazakh with an average Georgian, it would be clear enough that what is a disaster for Alma-Ata and Pavlodar, for Tbilisi and Gori is a gift from heaven.

Understandably, gas prices are a trigger setting in motion the mechanism of socio-political protests. But the curious thing is that the protests in Kazakhstan are not even particularly crowded. For example, five times more people come out to protest in Georgia, where the population is three times smaller. And yet, even with such a high turnout, politicians and experts complain about insufficient proactivity of Georgian protesters in defending their interests.

As for the protesters in Kazakhstan, who took to the streets demanding the resignation of the government, it is possible that after the series of mass pogroms and acts of vandalism, they are going to have to give up for a long time, if not forever, the possibility of participating in such actions, which the authorities will from now on associate with an attempt to organize new murders, pogroms and acts of looting.

A sad outcome not only for Kazakhstan’s potential political opposition, but for the country as a whole…

But, as Buffalo Springfield sang, “Nobody’s right if everybody’s wrong.” By this I mean that I can’t bring myself to say anything good about the current authorities of Kazakhstan. As it turned out, it took just one day of street riots and looting by several hundreds of thugs, lowlifes and teenage hoodlums for the government of such a big, strong and resource-rich country to effectively outsource Kazakhstan’s political life by requesting military assistance from the CSTO countries (i.e., Russia).

Within a day, the sovereign country receded into the past, essentially obliterating the most important of what had been achieved during the years of Nursultan Nazarbayev’s rule—Kazakhstan’s equidistant relations with the West and Russia. For thirty years, their Elbasy patiently and consistently built a policy that could not be called either clearly pro-Russian or unambiguously pro-Western. The policy that allowed Nazarbayev to build Kazakhstan’s relations with superpowers on the principle of “It’s not me who has to go to you, it’s you who will come to me”.

And they did come. Russia, China, the United States, Japan, the European Union….

As one of the founders of the Eurasian Economic Union, Nazarbayev knew perfectly well that Russia is a double-edged sword, and coming too close to it can be dangerous to one’s health. Which, by the way, was the reason for Nazarbayev’s seemingly extremely illogical decision to move the capital of the state from the prosperous, comfortable and relatively warm Almaty to bare Kazakh steppe, with not a single tree in sight and winter temperatures reaching -40°C. In fact, with this decision Elbasy marked the Kazakh presence in the vast and almost unpopulated region of Akmola Oblast of the former Soviet Union—the part of Northern Kazakhstan Russia has been claiming since the collapse of the Soviet Union.

For the first time, it seems, the world has seen a system of internal checks and balances, well-calculated neutrality and foreign policy balance, which took decades to build, turn to ashes in just 24 hours.

All we can do now is glimpse into the foreseeable future.

More than once have we witnessed Russia coming somewhere, but we have never seen it go away. 1989 doesn’t count. A giant country collapsed then, and it won’t happen again.

At least not while Putin is alive.

What does Russia’s protectorate mean for Kazakhstan? At first glance, nothing obviously bad. No significant popular resistance is to be expected. Firstly, the Kazakh protest has completely discredited itself, and secondly, the attitude of Kazakhs to Russia and Russians is not darkened by the massive dark cloud of the 1990s, etched on the memory of the peoples of the South and North Caucasus.

At first glance, nothing threatens the life of an average Kazakh: the situation will gradually stabilize, peace and order will be restored, the Russian troops will go to the barracks, so as not to be an eyesore….

But in the medium term, Moscow’s domination will inevitably affect Kazakhstan’s domestic life: Kremlin will set up the rules of the game as usual, and Kazakh leaders will not be able to get out of it. Kazakhstan’s political system will become more rigid, there will be fewer democratic breathing holes, business climate will start to focus on the Russian Federation, the merge of criminal and bureaucracy will speed up…

In turn, a change in Astana’s political course might adversely affect Georgia and Azerbaijan. Nazarbayev’s Astana thought about Kazakhstan’s participation in alternative energy and transport projects in the South Caucasus region, but we can forget about when all strategic decisions will be made in agreement with Moscow.

In a word, the good old moderately neutral and politically balanced Kazakhstan is becoming a thing of the past right before our eyes… We will soon find out what post-Nazarbayev’s Kazakhstan looks like.