The Iskander missile system has become a central topic among the three sides responsible for maintaining the ceasefire in Nagorno-Karabakh. 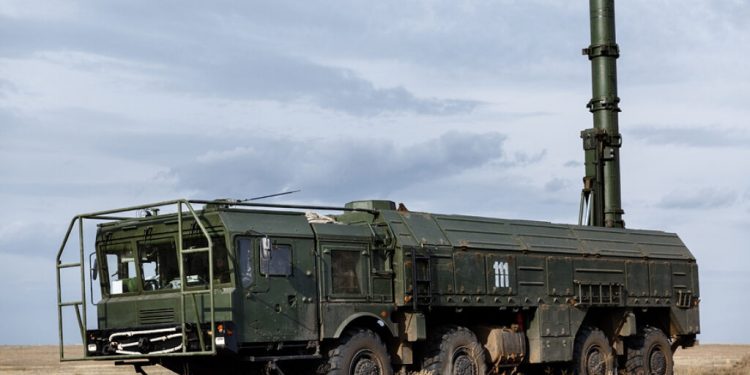 Following the war in Karabakh, Armenia and Azerbaijan finally signed a ceasefire agreement in November 2020 with the help of Russian President Vladimir Putin. However, recent political developments in both countries indicate that certain military manoeuvres in the last phases of the war will come back to haunt the trilateral agreement. These issues could increase uncertainty for all sides.

Alongside Azerbaijan’s accidental shootdown of a Russian helicopter and Armenia’s purported missile launch against Baku just a few hours before the ceasefire, the possible use of Russia-made Iskander missiles against Azerbaijani targets in Shusha has raised serious questions regarding who was responsible for such actions and why. Leaders in both Armenia and Azerbaijan have used the topic to achieve certain goals in both the domestic and external arenas. While it led to further polarisation in Armenia and triggered harsh rhetoric from Russian officials, the Iskander issue is viewed as an opportunity in Azerbaijan. This is because Baku hopes to indirectly signal grievances against certain Russian moves in Nagorno-Karabakh that have not taken into account its national interests.

It was former Chief Military Inspector of the Armenian Armed Forces, Movses Hakopian, who first claimed in November that Armenia had used the Iskander tactical ballistic missile system during the war. Despite this, he did not name the target. This issue rose to national prominence on February 16th when former President Serzh Sarkissian accused Prime Minister Nikol Pashinyan of failing to use the missiles in the early days of the war. This move could have hypothetically prevented further Azerbaijani advances on the battlefield. In an interview with local online news portal 1in.am on February 23rd, Pashinyan responded to the criticism by stating that the Iskander missiles were useless weapons from the 1980s. He also complained that even if they had been used against Azerbaijan that they would not have been very effective. His comments were met with controversy in Armenian politics and may have affected bilateral relations with Russia.

Domestically, Pashinyan faced unprecedented opposition from the Armenian military’s leading figures. He even asked the president to fire the deputy chief of the Armenian general staff, Lieutenant General Tiran Khachatrian, who claimed that Pashinyan’s comments regarding the Iskander missiles were “nonsense”. Several influential military figures, as well as the chief of the general staff Colonel-General Onik Gasparyan, subsequently challenged his decision and claimed that Pashinyan had become incompetent. In response, the prime minister accused them of organising a coup. He called on his supporters to come out on to the streets of Yerevan and defend the government.

Pashinyan’s remarks regarding the Iskander missiles understandably angered Moscow. His attempt to justify his decision to not use the missiles during the war threatened to damage the reputation of the Russian military-industrial complex at an international level. Russia’s Ministry of Defence was quick to issue a statement denying the prime minister’s assertions regarding the weapons and claimed that Russia had successfully used the Iskanders in Syria against several terrorist groups. At the same time, ministry officials denied the use of any type of Iskander missiles in Nagorno-Karabakh and claimed that the Armenian prime minister was being misled with inaccurate information. Facing stiff pressure from both domestic competition and the country’s external ‘patron’, Pashinyan agreed to a telephone conversation with Vladimir Putin on February 25th. During the call, he stated that he had received inaccurate information about the situation.

Watching from the sidelines, Azerbaijan had more time to work out its position on the issue in relation to Armenia and Russia. Commenting on the possible use of Iskander missiles at a press conference on February 26th, Azerbaijani President Ilham Aliyev said that he did not believe that Armenia had used the missiles during the war. He also stated that Prime Minister Pashinyan’s claims were simply a public blunder.

Despite this, it is perhaps more interesting to discuss President Aliyev’s claims that Armenia had acquired Iskander missiles free of charge from Russia alongside tanks, artillery, and air defence systems. This was not the first time that the Azerbaijani leader had openly denounced Russia’s military support for Armenia. He expressed similar ideas during and after the war on numerous occassions. It was therefore expected that Baku would build an Iskander narrative focused on expressing its grievances against Russian policy in Nagorno-Karabakh. This was favoured over doubling down on the Armenian leader’s comments.

In this context, a report from Azerbaijan’s national mine agency (ANAMA) on March 31st that claimed to have found traces of Iskander missiles fired on Shusha, proved to be a turning point regarding Baku’s approach to the issue. According to the report, the remains of different parts of the Iskander-M missile with the index code 9M723 were found on March 15th in Shusha 780 metres apart from each other. ANAMA’s evidence strengthened the credibility of video footage that was shared online a few days after the signing of the peace deal. The footage reportedly shows Armenian forces launching two Iskander missiles against Azerbaijani targets.

Later, Azerbaijani media went a step further and claimed that Russia was directly involved in the use of the Iskander missiles in Karabakh. The type of Iskander missiles employed in the war (9M723) are supposedly different to those that Armenia received from Russia in 2013 (9K720-E). Questions have subsequently been asked in Azerbaijan as to how these missiles could have been used against Shusha, if Armenia did not possess any of them in its military arsenal. When asked about Russia’s position on the issue on April 2nd, presidential spokesperson Dmitry Peskov said that the Kremlin was unaware of any report on Iskander missile fragments found in Karabakh and recalled that Russia-made missiles were not used during the war last autumn. According to sources close to the Azerbaijani government, Russian security services have supposedly launched an investigation into potential illegal deliveries of Iskander-M missiles to Armenia and their use in Nagorno-Karabakh.

Recent changes in Baku’s tone can be attributed to its dissatisfaction with some aspects of Russia’s peacekeeping activities in Nagorno-Karabakh. First of all, Baku believes that Russia is not eager to fulfill its share of responsibilities mentioned in article four of the November 10th peace agreement. This states that Armenian forces in Karabakh would be replaced with Russian peacekeepers. Despite this, allegations have been made that Armenian soldiers in civilian clothing have been deployed to the region through the Lachin Corridor, which has been under Russian control since the signing of the deal. Russian officials have also seemingly strengthened ties with the authorities in the disputed area. For example, Russian Deputy Defence Minister Dmitry Bulgakov visited the region on March 31st. At the same time, Russia’s seeming unwillingness to help Baku on a range of issues has also increased Azerbaijan’s unease with the Russian presence in the region. These problems include potential Armenian resistance in the region, the sharing of mine maps, and the release of militants that were detained following an infiltration attempt after the ceasefire.

The recent change in Azerbaijan’s approach to the Iskanders issue indicates that Baku may want to use the dispute to strengthen its hand in Karabakh. Unlike Armenia, which is currently experiencing domestic issues and reliant on Russia for much of its security, Azerbaijan has a wider ‘margin of error’ regarding its neighbour to the north. In the current period, Baku possesses a more stable domestic political system, as well as wider security links with other states.

Mahammad Mammadov is a research fellow at the Topchubashov Center in Baku. He holds an MA degree in Central and East European, Russian, and Eurasian Studies from the University of Glasgow and University of Tartu.