Last week, the Azeri carrier ordered 5 Boeing Triple Seven freighters, thus increasing its fleet to 18 units over the next 6 years. The company is continuing its growth path, making it one of the most important capacity providers for air freight on routes between Europe and the Far East, including the central Asian CIS states. 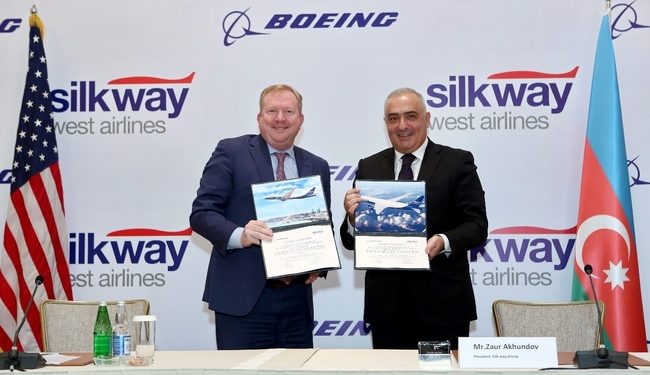 President Wolfgang Meier of Silk Way West Airlines puts it straight: “The B777 production freighters we just ordered do not replace any of our existing freighters. Instead, they complement our current fleet of 13 all-cargo aircraft.”

Apart from the purchase deal now inked, the airline prefers a rather silent approach regarding its strategy, which Western media has so far paid little attention to.

Evidenced by the aircraft order, the Caspian Sea-based company is gradually tiptoeing into the league dominated by big boys like AirBridgeCargo (ABC), Lufthansa Cargo (LCAG), Turkish Cargo (TK), or Qatar Airways Cargo (QR) on routes linking East Asia and Europe. A position achieved without much fanfare or PR measures.

In comparison, the Azeri carrier’s strategy differs only slightly from that of its geographically closest competitors QR, TK, or ABC.

Silk Way West Airlines’ east-west flights are routed via Baku, where goods destined for the local market or for distribution across the Caspian region, are unloaded and carried by commuting flights to their final destinations. Similar traffic models, which include an intermediate stop of the freighters in their respective hubs, are pursued by ABC / Moscow, TK Cargo / Istanbul or QR Cargo / Doha.

The sales contract for the 5 freighters was signed in Baku on 28APR21 by Zaur Akhundov, President of Silk Way Group, and Stan Deal, President and Chief Executive Officer of Boeing Commercial Airplanes. The ceremony was also attended by Rashad Nabiyev, Minister of Transport, Communications, and Technology, of the Republic of Azerbaijan, and Earle D. Litzenberger, U.S. Ambassador to Azerbaijan.

Following the signing of the contract, Minister Nabiyev stressed the importance of the deal not only for the airline, but also for his country: “Our goal is a comprehensive transportation network for Azerbaijan. In this context, air transport plays a crucial role, and I am convinced that the contract will help to consolidate Azerbaijan’s position as a regional transport hub and a reliable air cargo partner in international trade.”

According to Silk Way Group Chief, Zaur Akhundov, the purchase of the Boeing freighters is a “milestone for our company’s growth trajectory. I am confident that the acquisition of the new aircraft and the launch of this project will further strengthen the company’s leading position in the global air cargo market in the next 15-20 years.”

Boeing executive, Stan Deal, said that his company is “honored by the collaboration [with the Azeri carrier] and looks forward to complementing the existing fleet of 747 freighters with the efficiency and performance of the 777 freighter.”

On way to becoming a major player

He referred to the latest market analysis tabled by Boeing, according to which the global cargo market will grow by 60% within the next 20 years. With the existing fleet complemented by 5 Triple Sevens, which will be delivered successively until 2027, the Silk Way Group is on its way to becoming a major player in the CIS, the Middle East, Far East, and even North America, the Boeing executive predicted.

President Wolfgang Meier of Silk Way West Airlines pointed out the environmental aspect, as the B777F is a relatively fuel-efficient aircraft, he said. In addition to the introduction of the B777F, digitization activities will make a substantial contribution to sustainability, the executive emphasized.

Currently, the Azeri carrier’s fleet consist of five 747-8, seven 747-400 and one leased 747-400 BCF. Silk Way West Airlines was established in Baku just 9 years ago and has since grown into the largest cargo carrier in the Caspian Sea region, transporting 350,000 tons of air freight annually (2020).