While the volume of East-West and West-East cargo passing through the Caspian is expected to increase, it is unclear if the volume will expand enough for future Indexes to include the Azerbaijani Port. 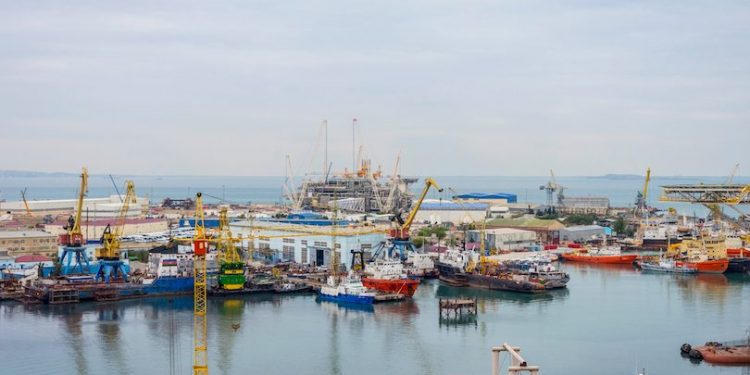 As the world prepares for a new Cold War (or a second Cold War), the stress on global supply chains due to the war in Ukraine continues to affect international commerce. The flow of goods, particularly energy, from Central Asia to Europe has become a vital issue since the war commenced, with Europe looking for alternative routes that avoid Russian territory. The Trans-Caspian International Transport Route (TITR), commonly known as the Middle Corridor, has emerged as a viable alternative. The infrastructural cornerstone of this route is Azerbaijan’s Baku International Sea Trade Port.

Let us understand the importance of the Port of Baku. The Middle Corridor is a joint venture composed of Azerbaijan, Georgia, Kazakhstan, and Turkey – due to historical and recent tensions and disputes with neighboring states (namely the 2020 Nagorno-Karabakh War), Armenia has not formally joined the Corridor. Thus, Azerbaijan’s importance becomes apparent as it is the only Caucasus country with a port in the Caspian Sea, to which goods arrive from Kazakhstan and Turkmenistan.

Khudayar Hasanli, the Head of the Strategic Planning and Development department at the Port, told Trend news that a route for the transshipment of goods from China to Europe passing through Azerbaijan has been established. “The number of block trains have already passed through the territory of Azerbaijan along this route … Large flow of goods is expected along the East-West corridor through the territory of our country,” Hasanli said.

The TITR association expects that doubled container traffic “will translate to roughly 50,000 TEUs transported through the Middle Corridor in 2022.” Even more, the sixfold increase in cargo volumes could mean that the Middle Corridor could see up to 3,2 million metric tons of transported cargo by the end of the year. In other words, we can generally expect more goods to pass through Baku in the future due to the Middle Corridor. In the hypothetical scenario that countries like China and Uzbekistan join the Corridor, this will provide an even more significant boost (to be clear, the Middle Road is a project independent from China’s Belt and Road Initiative). The Port currently has 13 berths and ten warehouses, covering a total area of 400 hectares.

Since the war commenced, the Corridor has gained international attention, particularly from European governments, investors, and transportation companies looking to sign new deals. For example, from 26-27 July, a delegation from Poland’s Ministry of Infrastructure and the Port Gdańsk Authority visited Azerbaijan. As a result, representatives from the two ports signed a Letter of Intent to promote cooperation in areas like “port development and operation, modern logistics services [and] intermodal transport.”

Private companies are also looking to increase their operations in Baku. For example, on 16-18 June, the Dutch-based logistics company Cabooter Group visited the Port and discussed greater cooperation. The company has already commenced operations in Azerbaijan as it “organizes cargo supplies to China through the Port of Baku.” Similarly, Baku-based transport company ADY Container provides transportation services from as far as Tashkent (Uzbekistan) to the ports of Aktau (Kazakhstan), Turkmenbashi (Turkmenistan), Baku and from there to Georgian and Turkish ports in the Black Sea, with Constanta port (Romania) being the final destination.

There are also potential new partners for the Port. One is South Korea’s SJ Logistics America, as company representatives visited the Port in mid-July. Turkey’s Albayrak Grubu holding is a newcomer to the Caspian, as the holdings and the Port signed an agreement on 15 July. “The Parties will jointly operate at the ‘Fertilizer,’ ‘Ro-Ro’ terminals of the Port of Baku, [and] they will cooperate closely in other areas,” according to a statement by the Port. “We aim to increase the Baku port role in our region, as well as its logistics capabilities… Attracting our specialists to the Baku port will create the basis for mutually beneficial cooperation in the first public-private partnership in Azerbaijan,” said the head of Albayrak Holding, Mehmet Albayrak. Moreover, as already mentioned the Baku port is part of the conglomerate of companies that constitute the Trans-Caspian International Transport Route (TITR) association, headquartered in Kazakhstan.

It is also worth noting that the Azerbaijani government has gone on a public relations offensive by bringing delegations to visit the Port, thereby increasing its international image and importance. Since the war in Ukraine commenced in February, the Port has hosted delegations from the European Parliament, staff members from the US Congress, diplomats from various countries, and even students from Princeton University.

Global powers have not overlooked the relevancy of the Port and the Middle Corridor in the current global situation. On 7 July, US Secretary of State Antony Blinken spoke with Azerbaijani President Ilham Aliyev. According to State Department Spokesperson Ned Price, “the Secretary reiterated the United States offer of assistance in helping facilitate the opening of regional transportation and communication linkages.”

While Baku port’s importance is growing, the country is still far from becoming a globally renowned container port. The Container Port Performance Index 2021, drafted by the World Bank and S&P Market Intelligence, does not list the Baku port. As a result, the Port does not appear in the report’s list of top ports in Western, Central, and South Asia. The top Port in the said region (and in the world) is King Abdullah Port, Saudi Arabia, while the last place is reserved for Chattogram port, Bangladesh.

While the volume of East-West and West-East cargo passing through the Caspian is expected to increase, it is unclear if the volume will expand enough for future Indexes to include the Azerbaijani Port. With that said, infrastructure upgrades, faster cargo movement, and better administrative processes will undoubtedly help this port gain notoriety, particularly if the overall importance of the Middle Corridor grows in the coming months and years. Obviously, this scenario will depend on the war and the future of global geopolitics and supply chain strategies.

Moreover, the future of the Port of Baku is inevitably tied to other Middle Corridor states’ infrastructure projects. Reports show that other countries are upgrading ports, railways, and roads, but more is needed, including a deep water port in the Black Sea to accommodate larger container ships. Finally, the lack of Armenian participation is also problematic; if Armenia decides to join the Corridor, this could make transportation from the Caspian to the Black Sea faster.

The development of Baku port is not solely dependent on the Middle Corridor. There is also the International North-South Transport Corridor (INSTC), which connects India and the Persian Gulf, via Iran and Azerbaijan, to Russia, and from there to Northern Europe. In addition, the Azerbaijani government is reportedly in the process of expanding the Zangazur Corridor, which would strengthen the connection from Iran to Azerbaijan, passing through Baku.

A critical issue is that the INSTC will cross territory that remains contested between Armenia and Azerbaijan. “The irony is that should the corridor become functional, Armenia would benefit as it would then have rail connectivity connection through to Russia, as well as Turkey and Iran,” argues the Silk Road Briefing. It remains to be seen whether the Armenian government will decide to fully join either the Middle Corridor, the INSTC, or both. However, the issue is that the Baku port will remain a critical node in any trade and commerce that passes through Armenia.

As the war in Ukraine continues, the establishment of a new Cold War, combined with the consequences of the COVID-19 pandemic, global supply chains continue to undergo a brutal shake-up. Governments and private transportation industries seek to avoid passing through Russian territory. Thus, the Trans-Caspian International Transport Route, or Middle Corridor, has increased in importance since the war commenced. Azerbaijan’s Port of Baku is a critical transportation node that unites Central Asia with the Caucasus, Turkey, and Europe. As terms like “supply chain” quickly rise to the top of the current jargon among policymakers, analysts, and scholars, the Port of Baku must be monitored closely.