Turkey is bolstering defense cooperation with Azerbaijan as it seeks to double down on the military success of last year’s war between Azerbaijan and Armenia. 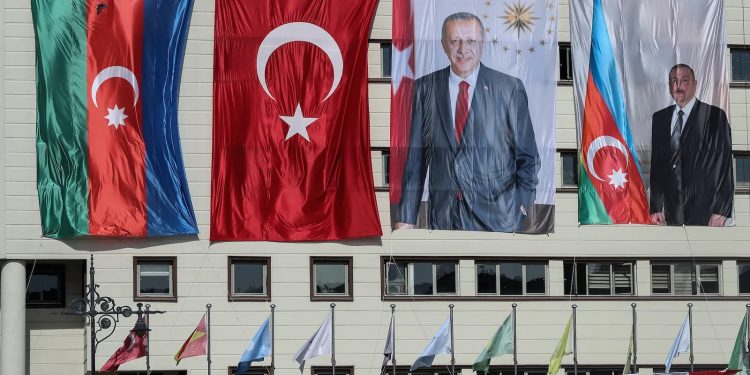 The national flags of Azerbaijan (left) and Turkey, and portraits of Turkish President Recep Tayyip Erdogan and Azerbaijani President Ilham Aliyev (right), hang side-by-side on the mayoral building in the Kecioren district of Ankara on October 21, 2020. Photo: AFP / Adem Altan

As skirmishes along the Armenia-Azerbaijan border increased in recent weeks, there was even speculation that Turkey was on the brink of forging a joint military force with Baku. Turkey helped Azerbaijan come out on top of the six-week conflict over the Nagorno-Karabakh region and it wants to capitalize by further boosting its influence in the South Caucasus.

Under President Recep Tayyip Erdogan’s ruling Justice and Development Party (AKP), Turkey has made no secret of its thirst for a grander role in swaths of the Arab Middle East, Libya and the Eastern Mediterranean. But if it pushes too far in the Caucasus, it risks antagonizing Russia, which views the region as its own historical back yard.

Symbolized by the popular motto of “one nation, two states,” Turkey and Azerbaijan have held a close bond since Baku declared independence in 1991. The countries are predominantly Muslim, share ethnic and cultural similarities and are linked by strong economic interests.

A chronic shared concern between the two is thwarting the regional ambitions of Armenia. Turkey and Armenia have no diplomatic relations and a history of hostility that dates back a century.

Ties between Ankara and Baku grew deeper after Turkey threw its support behind Azerbaijan during last year’s conflict. Ankara supplied Azerbaijani forces with armed Bayraktar TB2 drones that were used to devastating effect against Armenian troops.

The war ended with a Russia-brokered deal in November and resulted in Baku’s military victory over several cities and nearly 300 settlements and villages. At least 5,000 soldiers and more than 140 civilians were killed in the fighting, which also displaced tens of thousands of people. The outcome delivered a blow to Armenia’s claims to the region that span nearly three decades.

In signs that tensions are far from over, there have been pockets of fighting along the Armenia-Azerbaijan border over the past few weeks. On August 1, the Azerbaijani Defense Ministry said Armenian army elements targeted its positions and Baku responded with retaliatory fire. In early August, at least three Armenian troops died and two Azeri soldiers were wounded in clashes in Azerbaijan’s Kalbajar district.

All this may have fueled reports in the Turkish media that a joint Azerbaijan-Turkey force was imminent.

The speculation was later rowed back, after it turned out the source of the confusion was a poor translation of a statement by Turkish parliamentary Speaker Mustafa Sentop at the signing ceremony of the Baku Declaration on July 28 between Turkey, Azerbaijan and Pakistan. But the prospect of a joint army had seemed plausible given that military cooperation between Ankara and Baku has steadily grown since the conflict.

Ankara is adamant that it cannot lose influence over the Nagorno-Karabakh settlement and is looking to enhance its caretaker role in the South Caucasus.

In late June, the Turkish and Azerbaijani militaries conducted joint drills in Baku that involved personnel, tanks and drones. Similar bilateral exercises were held last year, made possible by a 2010 agreement that mandates cooperation when either country faces aggression from a third state or group of states.

Turkey and Azerbaijan signed the Shusha Declaration in July, named after the city in the Nagorno-Karabakh region that Azerbaijan now controls, affirming a joint commitment to defense cooperation, stability and prosperity in the region. A central concern lies with restructuring and modernizing their armed forces.

Rumors that Turkey may be planning a military base in Azerbaijan are cause for concern for Russia, which has its own base in Armenia. Moscow has deployed 2,000 peacekeepers to the region and wants to maintain a monopoly over the balance of power there.

On July 20, President Ilham Aliyev of Azerbaijan met with Vladimir Putin in Moscow for the second time this year to discuss the postwar peace agreement and a way forward.

Russia is not the only one with an interest in how the Azerbaijan-Armenia ceasefire deal plays out. Brussels seeks the revival of the Minsk Group under the auspices of the Organization for Security and Cooperation in Europe, paving the way for the US and France (as Minsk co-chairs) to take on a larger mediating role.

From their perspective, the conflict has not been resolved once and for all. European Council president Charles Michel said in July during a visit to Yerevan that “the status of Nagorno-Karabakh must also be addressed.”

For years, Azerbaijan expressed frustration with the stalled Minsk process and is not keen to assign it any significant role in the border demarcation process with Armenia.

In recent years, Turkish foreign policy has prioritized the creation of a medley of regional organizations, pacts and local summits as potential counterweights to established Western multilateral organizations and powerhouses like Russia and Iran. Examples are the recent trilateral agreement with Pakistan and Azerbaijan or reports earlier this year of reviving Turkey-Israel relations through Azerbaijani mediation.

Turkey recently hinted at a new six-state platform to support peace in the Caucasus that would include Turkey, Azerbaijan, Russia, Iran, Georgia and Armenia.

Turkey is keen to sign off on a success story in its otherwise rancorous foreign-policy making, and amid its domestic economic woes and plummeting currency.

But against the backdrop of a burgeoning bilateral military pact between Ankara and Baku, Russia and neighboring states are hesitant to buy in to its rhetoric on regional cooperation. Peripheral states have always managed their relationship with Russia carefully, wary of the consequences of a misstep.

While Turkey tries to tinker with the regional balance of power, it is unclear just how much it can achieve beyond its safe-bet alliance with Azerbaijan.

Burcu Ozcelik is a research fellow at Cambridge University.