Azerbaijan expanded its border with Iran from 310 miles to 373 miles in the 2020 Nagorno-Karabakh War. Considering the country's robust intelligence collaboration with Israel, it's not surprising Tehran is concerned. 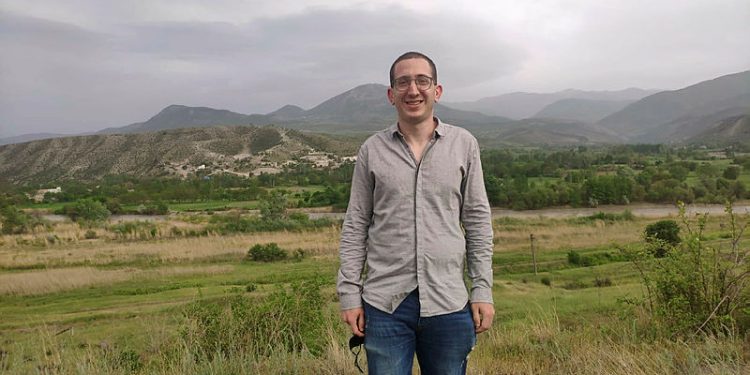 The landscape surrounding the Iran-Azerbaijan border is incredibly beautiful. These pristine, green hills, however, conceal widespread intelligence-gathering activity by the Mossad, according to foreign reports. On Tuesday, I toured the border at two points: the first at Fuzuli and the second at Zangilan. Both these areas were liberated in the 2020 Nagorno-Karabakh War, in which Azerbaijan expanded its border with Iran from 500 kilometers (310 miles) to 600 kilometers (373 miles). And if up until that war the ayatollah regime in Tehran struggled to monitor the gigantic, fenceless border with its neighbor, now this border is even longer.

On the diplomatic level, while Iran has an ambassador in Baku and Azerbaijan has an ambassador in Tehran, the ayatollah regime views the expansive border with Azerbaijan as a big security problem. Tehran fears a nationalist uprising by the nearly 30 million Azeris who are Iranian citizens, particularly as the sanctions imposed by the Trump administration have had an adverse effect on the local population.

Azeri Iranians live mainly in two provinces bordering Azerbaijan: West Azerbaijan and East Azerbaijan. These names, of course, are not coincidental. These provinces border southern Azerbaijan, and on a daily basis, Azeri radio stations play songs of yearning for a people divided by two countries.

On the Iranian side of the border, meanwhile, we saw last week why the regime in Tehran views the Azeri provinces in the northwest as a security threat, after a commander in the Islamic Revolutionary Guard Corps, Osman Hosseini, was assassinated in Piranshahr in West Azerbaijan by armed assailants.

At the same time, Iran views a strong Azerbaijan as a major threat – because of Baku’s own military might and its robust collaboration with Israel. The confluence of all these variables means tensions are exceedingly high along the Aras River, a natural border separating the two countries.

Iran exacerbated these tensions by lending considerable support to Armenia during the Nagorno-Karabakh War. It gave the Armenians weapons and intelligence information. Muhammad Hussein-Zada Hejazi, the former deputy commander of the IRGC’s clandestine Quds Force who died of an alleged heart attack on Sunday, likely headed this intelligence sharing operation.

Baku, in the face of Iran’s desire for Armenian victory and a shorter border with Azerbaijan, held firm with the help of large weapons shipments from Israel, namely the “Harop” kamikaze drone, and other weapons provided by Turkey, such as the “Bayraktar” drone. In an apparent “middle finger” to the Iranians, the “Azerbaijan-Turkey Friendship Park” is currently being built in Zangilan – just a few short minutes from the Iranian border.

Indicating the wariness toward Iran on this side of the border, despite being granted full journalistic freedom to photograph and move along the border, I was also accompanied by policemen armed with rifles. Perhaps their concerns for my safety were also related to the intelligence cooperation with Israel, which has been a significant thorn in Tehran’s side.

Just recently, Iran accused Israel of sabotaging the nuclear facility at Natanz. Officials in Tehran claimed that the Natanz employee who allegedly planted the explosive device, Reza Karimi, had already fled the country by the time the blast occurred. Moreover, other intelligence operations, such as the Mossad’s historic theft of the Iranian nuclear archive from the heart of Tehran, cannot be carried out without significant help from other countries.

What’s certain is that Azerbaijan is the only Muslim country in the world where its people can be seen waving Israeli flags at parades and celebrations marking victory in the Nagorno-Karabakh War. Israeli flags can also be seen hanging around the country alongside Turkish and Pakistani flags.

“A good relationship between Turkey and Israel will also benefit Azerbaijan,” says a senior Azeri official, noting Baku’s strong ties with both countries.

Such a tripartite, if Ankara ever comes to its senses and learns to compartmentalize its relations with Israel from the Palestinians, will be a fatal blow to an Iranian regime forced to contend with two Muslim neighbors with very strong ties to Israel. With that, Turkish President Recep Tayyip Erdogan has already admitted that “intelligence relations between us and Israel are ongoing.”