Tensions grow with Azerbaijan as Iran moves forces to border

Tensions spiked between Azerbaijan and Iran recently surrounding trade with Armenia and military exercises in the region. 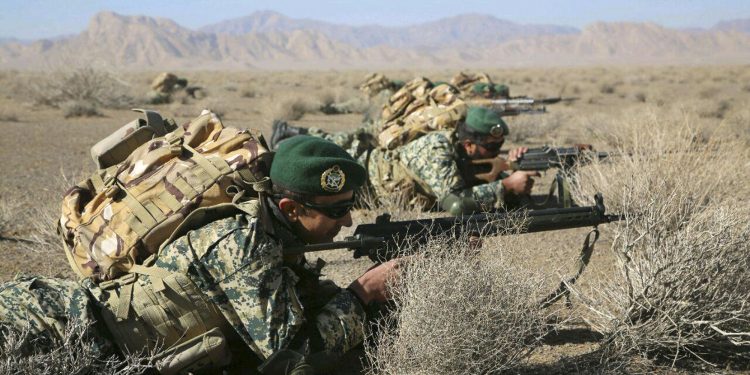 Tensions spiked between Azerbaijan and Iran in recent weeks after Azerbaijan began targeting Iranian trucks with fines and arrests, and Iran moved military forces to its border with Azerbaijan and warned against Israeli influence near its borders.

In August, the Azerbaijan Foreign Ministry invited the Iranian Ambassador to Azerbaijan, due to “undesirable facts” concerning what it called illegal travel of Iranian trucks to the Karabakh region without the permission of Azerbaijan. A statement by the Azerbaijani Foreign Ministry stated that the new Iranian administration would take steps to end such incidents.

The trucks in question were traveling on a road between the Armenian towns of Kapan and Goris which partially crosses through territory handed over to Azerbaijan after the Nagorno-Karabakh war last year, according to RFE/RL. The highway, patrolled by Russian peacekeepers, is Armenia’s only link to Iran.

Earlier this month, Azerbaijani forces set up a checkpoint and began taxing and inspecting Iranian commercial trucks traveling on the highway, according to RFE/RL. A number of Iranian truck drivers were even arrested.

Azerbaijani officials have stated that Azerbaijani law requires all foreign vehicles, not just Iranian ones, entering the country to pay road and transit fees.

In an interview with the Turkish Anadolu Agency on Tuesday, Azerbaijani President Ilham Aliyev expressed outrage at the continued travel of Iranian trucks through Azerbaijani territory, questioning why Iran was so insistent on continuing trade to a region with only 25,000 inhabitants.

Tensions also rose recently due to joint military exercises carried out by Azerbaijan and Turkey in the Caspian Sea, with the Iranian Foreign Ministry warning that such drills violated international conventions banning the military presence of countries other than the five states which border the sea.

In the interview with Anadolu Agency, the Azerbaijani president expressed shock at Iran’s decision to hold a military exercise along its border, saying it was the first time in Azerbaijan’s 30-year history of independence that this had occurred.

While Aliyev admitted that every country has the sovereign right to conduct military exercises in its own territory, he questioned why Iran chose this specific time to do so. The president stressed that he does “not wish to see a single fact that would undermine long-term cooperation in the region” and hopes that the “emotional reaction” to Azerbaijan’s “legitimate steps” is temporary.

After the interview, Iranian Foreign Ministry spokesman Saeed Khatibzadeh stated that Aliyev’s remarks were “surprising” as such issues should have been handled through proper channels and not the media.

Concerning the upcoming Iranian military drill, Khatibzadeh stated that it was aimed at “protecting regional security,” adding however that Iran “will not tolerate the Israeli regime’s presence near its borders even if it’s ceremonial” and “will take any actions it deems necessary to protect its national security.”

In a meeting with Azerbaijan’s Foreign Minister Jeyhun Bayramov on the sidelines of the United Nations General Assembly last week, Iranian Foreign Minister Hossein Amir-Abdollahian stressed the importance of good relations between the two countries, but added that “some third parties should not be allowed to affect the good relations,” according to the Iranian IRNA news agency.

The “third parties” comment has been interpreted by some as referring to Israel, an ally of Azerbaijan, but an enemy of Iran.

On Tuesday, Mohammad Pakpour, commander of the land forces of the Islamic Revolutionary Guard Corps (IRGC), warned that Iran expected neighboring countries not “to be a breeding ground for the evil deeds of the Zionist regime,” according to the IRGC-affiliated Tasnim News Agency.

“The Islamic Republic expects our neighboring border areas and neighboring countries to be a safe and secure environment for countries and the region,” said the commander. “Therefore, it is expected that while being doubly sensitive to this, they will not allow a foreign element such as the Zionist regime, whose conspiracies and malice with the Muslim nations are not hidden from anyone, to make the soil of our neighbors a bedrock to achieve its evil and criminal goals.”

Pakpour warned that there is “no doubt” that Israel is helping “some countries in the region” with the goal of created discord and division among Muslim countries.

“We cannot accept that some countries, under the influence of third countries, make unrealistic and provocative statements regarding the promotion of the readiness of the combat units of the Islamic Republic and undermine our actions,” said Pakpour. “Neighboring governments know better than anyone else the reasons for holding Iranian exercises.”

Pakpour stressed that Iran had not reacted to 37 exercises conducted by countries in the region in recent months and respected the inalienable right of every country to conduct drills.

Kioumars Heydari, commander of the Iranian Army’s Ground Forces, announced on Thursday that an exercise, named “Conquerors of Khaybar,” would start on Friday in northwestern Iran in order to test weapons and equipment and assess the readiness of the armed forces in any arena and along the borders of Iran, according to the Iranian Fars News Agency.

The name of the exercise, “Conquerors of Khaybar,” may be a reference to the Battle of Khaybar, in which the Muslims, led by Muhammad, fought against the Jews in Khaybar, eventually defeating and imposing a tax on them.

An opinion piece published in Kayhan, a newspaper associated with Iranian Supreme Leader Ali Khamenei, warned against an alleged “invisible alliance” between the US, Turkey, Azerbaijan, Armenia and Israel, saying that it could have a “major impact” on Iran’s and Russia’s political weight in the region.

The author of the piece warned that Turkey and Azerbaijan must know that “Iran can thwart the conspiracy designed for them in a regrettable way.”

A video report on Iran’s IRIB broadcaster on Tuesday seemed to insinuate that a “terrorist” group that it recently thwarted was armed in Azerbaijan, showing pictures of Baku, Azerbaijan’s capital, while stating that it was armed in “one of the neighboring countries.”

Iran’s Intelligence Ministry announced on Tuesday that it had killed the leader of a group that it claimed was supported and guided by the intelligence services of countries hostile to Iran. The group allegedly planned to strike sensitive and vital sites in Iran, according to Iranian media. All members of the group were arrested by Iranian intelligence forces.

Azerbaijan and Israel have close ties, with the president of Azerbaijan saying in a discussion with The Nizami Ganjavi International Center in May that relations with Israel were very diverse and were especially strong in the defense industry. “It is no secret that Azerbaijan has full access to Israeli defense industry products,” said Aliyev at the time.

Israeli arms, including the LORA missile and the Israel Aerospace Industries (IAI) Harop suicide drone, were reportedly used by Azerbaijan in the Nagorno-Karabakh war with Armenia last year.