Karabakh war happened because Minsk co-chairs were focused on other issues, Markedonov says

A year ago today, the conflict between Armenia and Azerbaijan intensified into war. There were many reasons for that, but among the most important were Yerevan’s unexpectedly hard line, the expanding role of Turkey, and the failure of the Minsk Co-Chair countries to focus on the South Caucasus, Sergey Markedonov says. 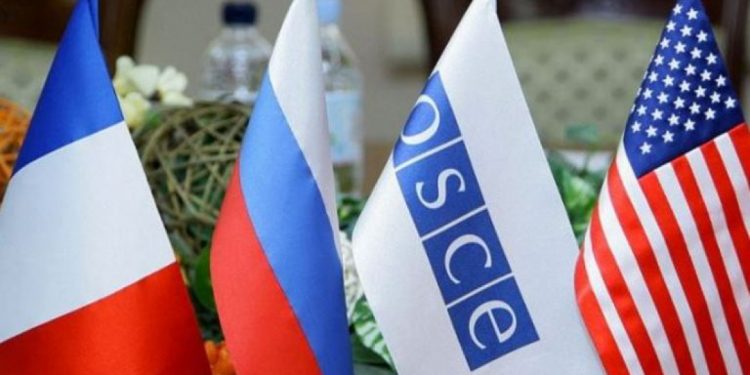 Photo: Flags of France, Russia and the USA - the Minsk Group Co-Chair states – alongside the flag of the OSCE (archive)

Because he was not linked as closely to Qarabagh as his predecessors, Armenian President Nikol Pashinyan had been expected to be more moderate than they, the MGIMO specialist on the Caucasus says; but he proved to be even more hard line something that infuriated Baku (eurasia.expert/nagornyy-karabakh-god-spustya/).

Azerbaijani President Ilham Aliyev lost patience with the existing situation which had been in place for 26 years and even replaced his long-time foreign minister Elmar Mamedyarov who represented those in Baku who believed that a negotiated settlement of the conflict with Armenia was possible with a new man less committed to talks.

The drift toward war was intensified both by the increasing activity of Turkey in the region which gave Azerbaijan confidence that it would have Ankara in its corner and by the fact that the countries of the co-chairs of the Minsk Group were all devoting less attention to the Qarabagh issue because their attention was focused on problems elsewhere, Markedonov says.

“For Russia, the domestic political crisis in Belarus was a dangerous challenge; for the US, problem number one was the struggle for the White House; and for France, the issue of leadership in the European Union given the pandemic and the lack of clarity in trans-Atlantic relations.” Thus, the way to war was opened.

Before the war, Baku did not control something like 13 percent of its territory; after the war, it controlled all but a few percent, having eliminated Armenia’s buffer zone and retaken portions of what had been the Armenian Artsakh Republic. But it did not move to take complete control of the Armenian areas, in part because of Russia’s role.

According to Markedonov, “Qarabagh ceased to be the epicenter of the conflict,” giving way to issues of delimitation of borders and the opening of transit routes, but at the same time, the basic issue that had bedeviled the two sides for more than two decades remained: the status of Qarabagh. Armenia wants a special status for it, something Azerbaijan rejects.

Before last year’s fighting, Yerevan “positioned itself as the strongest military state in the Caucasus region;” but its defeat on the field of battle demolished that image. “Now, its dependence on foreign players has immeasurably grown.” Azerbaijan too despite its victory also is now more linked to Turkey than ever before.

“Armenia today,” the Russian analyst says, “in fact has given up on its maximalist goals. Yerevan cannot hope to fight for the return of ‘a security belt’ on its own, and it will not receive help in that regard either from Russia, its strategic ally or from the West.” What it seeks is to keep the question of status open and to reopen the trade routes.

The Minsk Group is more concerned with the former while Russia is more interested in the latter and in the delimitation and demarcation of borders, Markedonov says.

Russia came out of the conflict both with gains and losses, he continues. It gained by being able to introduce its forces as “peacekeepers” in Qarabagh, but it lost by having to deal with expanded Turkish influence. Before this fighting, Russia did not have to do that and so it is now operating under additional constraints.

But Russia’s losses were bigger than that, the Moscow analyst suggests. Not only has Turkey expanded its role, but “Azerbaijan destroyed the former status quo on its own without the approval of Russia” and “Armenia, a strategic ally of Moscow was defeated and forced to accept humiliating conditions.”

Despite all this, “both sides in the conflict – Armenia and Azerbaijan – are prepared and today accept Moscow’s special role in the resolution of the conflict.” In both the November 2020 and January 2021 declarations, Moscow assumes a leadership role there which neither the West nor Turkey can easily challenge.