Why is Iran deploying troops on its border with Azerbaijan?

Tehran is not happy about Azerbaijan’s victory in the disputed Nagorno-Karabakh against Armenia. And Baku’s restrictions on Iranian trucks entering the region escalated tensions between the neighbours. 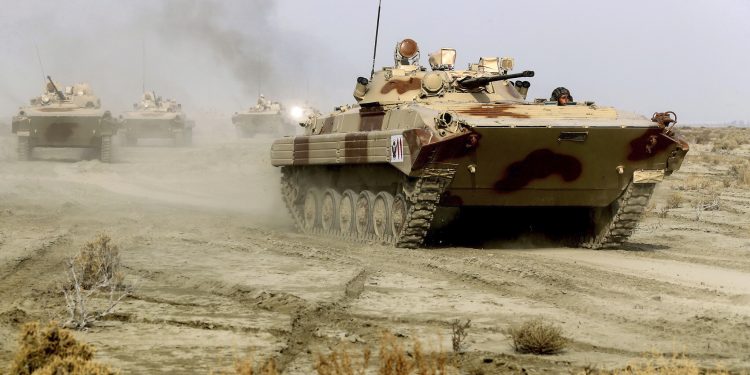 Illustrative: This photo released January 19, 2021, by the Iranian Army, shows tanks moving during a military drill. (Iranian Army via AP)

When countries do military exercises close to another country’s border like Iran is doing now near the Azerbaijani border, it’s often perceived as an alarming sign, a warning shot to the neighbour that things aren’t going well between them.

So what’s Tehran’s message to Baku with its non-stop military drills? The tense border situation has caused war mongering amongst the Iranian population, as they take occasional videos and pictures of their military trucks and tanks moving toward the country’s border with Azerbaijan.

The Iranian government gave a vague explanation, saying the drills aim to ensure Tehran’s ‘sovereignty’. Its foreign ministry spokesman said that “Iran will not tolerate the presence of the Zionist regime near our borders”, referring to Israel. But Israel has no borders with both Iran and Azerbaijan. While Baku shares a working relationship with Tel Aviv, it has no official policy to support Israel against Iran.

As a result, it appears that there are other unofficial reasons for Iran’s continuing military exercises near the Azerbaijani border.

Experts see three main elements on why Iran is deploying forces along the border with Azerbaijan, ranging from the Azerbaijan-Armenia conflict to developing a response to the recent joint Turkey-Azerbaijan-Pakistan drills in the region to sending messages to the large Azerbaijani population inside Iran.

First, Iran was not happy about the way the Forty-Four Day War between Baku and Yerevan on the Nagorno Karabakh conflict ended last year with Baku’s victory, gaining much of the disputed region from Armenian occupiers. From the very beginning until now, Tehran has silently backed Armenians against Azerbaijanis while Azerbaijan has a Shia majority like Iran.

There were a number of reasons for Tehran’s support to Yerevan, but one of them is related to Iran’s trade route across West Asia. Through formerly Armenian-occupied Karabakh, Iran was able to reach Russia and West Asia mostly without paying any customs for its trucks and other transportation means, according to Fatima Karimkhan, a Tehran-based journalist.

Following the war, Azerbaijan, gaining much of Karabakh territory, has put “pressure on Iran’s access to West Asia” by restricting and charging Iranian transportation across Karabakh to reach Armenia, Karimkhan tells TRT World.

But for Baku, that policy is quite normal because Karabakh is part of Azerbaijani sovereignty and any transportation related to trade activities across that region should be subject to customs. Also, Azerbaijani authorities have been concerned that Iranian trucks might also carry military equipment, which could end up at the hands of Armenians, their long adversary.

During an interview with Turkey’s Anadolu Agency, Azerbaijani President Ilham Aliyev was clear about the issue. “We have already had knowledge that Iranian trucks illegally entered the Karabakh region many times during and prior to the war,” Aliyev said.

After taking control of much of Karabakh, Baku began showing its uneasiness toward Iranian trucks. “Step by step, we began controlling the road across our Azerbaijani territory [going to Karabakh] and the number of [Iranian] trucks eventually diminished to zero,” the president said.

He also protested Iranian drills near the Azerbaijani border. “Why now, and why on our border? Why is this being done after we liberated these lands after 30 years of [Armenian] occupation?” Aliyev asked. He also said that he was “very surprised” by Iranian military drills.

“Iran with this military exercise is showing its seriousness about the road connection to Armenia and West Asia,” she adds.

Second, Iran has also been concerned about its large Turkic population, most of which is Azerbaijanis. Some believe that Iran’s Turkic-origin population, which includes Turkmen, Qashgais and other Turkish-speaking groups, might amount to nearly 40 percent.

Many Azeris call Iran’s north southern Azerbaijan, where nearly 20 million Azerbaijanis live according to different estimates. Some Azeri nationalists and intellectuals have long defined both northern and southern parts as culturally and socially identical, arguing that they should be joined under a political union.

All these also make Tehran nervous. The Shia-majority country’s nervousness was increased by recent trilateral Turkey-Pakistan-Azerbaijan drills, which could encourage its ethnic Azerbaijani population to show more opposition to Tehran to Iranian thinking, says Matthew Bryza, the former US ambassador to Azerbaijan and a senior fellow at the Atlantic Council.

“Iran is deploying its military along its border with Azerbaijan in response to trilateral military exercises being conducted by Azerbaijan, Turkey and Pakistan,” Bryza tells TRT World. The joint drills began in Baku on September 12. While Iran is not trying to be “hostile”, it is still showing the three countries its uneasiness over their joint drill, according to the former US diplomat.

Bryza draws attention to the fact that during the Azerbaijan-Armenia War, there were large pro-Azerbaijan demonstrations in northern Iran, underlining how Azeri communities in Iran and Azerbaijan have been unified against the Armenian occupation of the Karabakh region.

The leadership in Tehran might increasingly worry about the prospects of ethnic Azerbaijani separatism after Baku’s victory over Yerevan, according to Bryza. “Mostly, Iranian military deployment along the Azerbaijani border is an internal signal [to Iranian Azerbaijanis],” Bryza says.

Karimkhan, the Iranian journalist, also thinks that there is an internal dimension regarding Tehran’s recent military drills. A lot of Iranians, who share videos and pictures of Iran’s military vehicles moving into the country’s northwestern border, “are excited” that military exercises show the country’s determination to defend its “territorial integrity”, she says.

While she thinks the idea of unification of two different parts of Azerbaijan is “just propaganda”, most people in Iran “don’t look at this in this way”, she says. “They think these unification voices could go further, so they very much support military exercises along Iran’s border with Azerbaijan right now,” she adds.

“On the other hand, in Azerbaijani political memory and foreign policy, the idea of Greater Azerbaijan has always been an important factor,” Yalinkilicli added.

For Iran, the political argument of Greater Azerbaijan is a threat to the Iranian establishment, which has used its support of Armenia as a counter-measure to minimise Azerbaijani aspirations in Iran and across the region, according to Yalinkilicli.