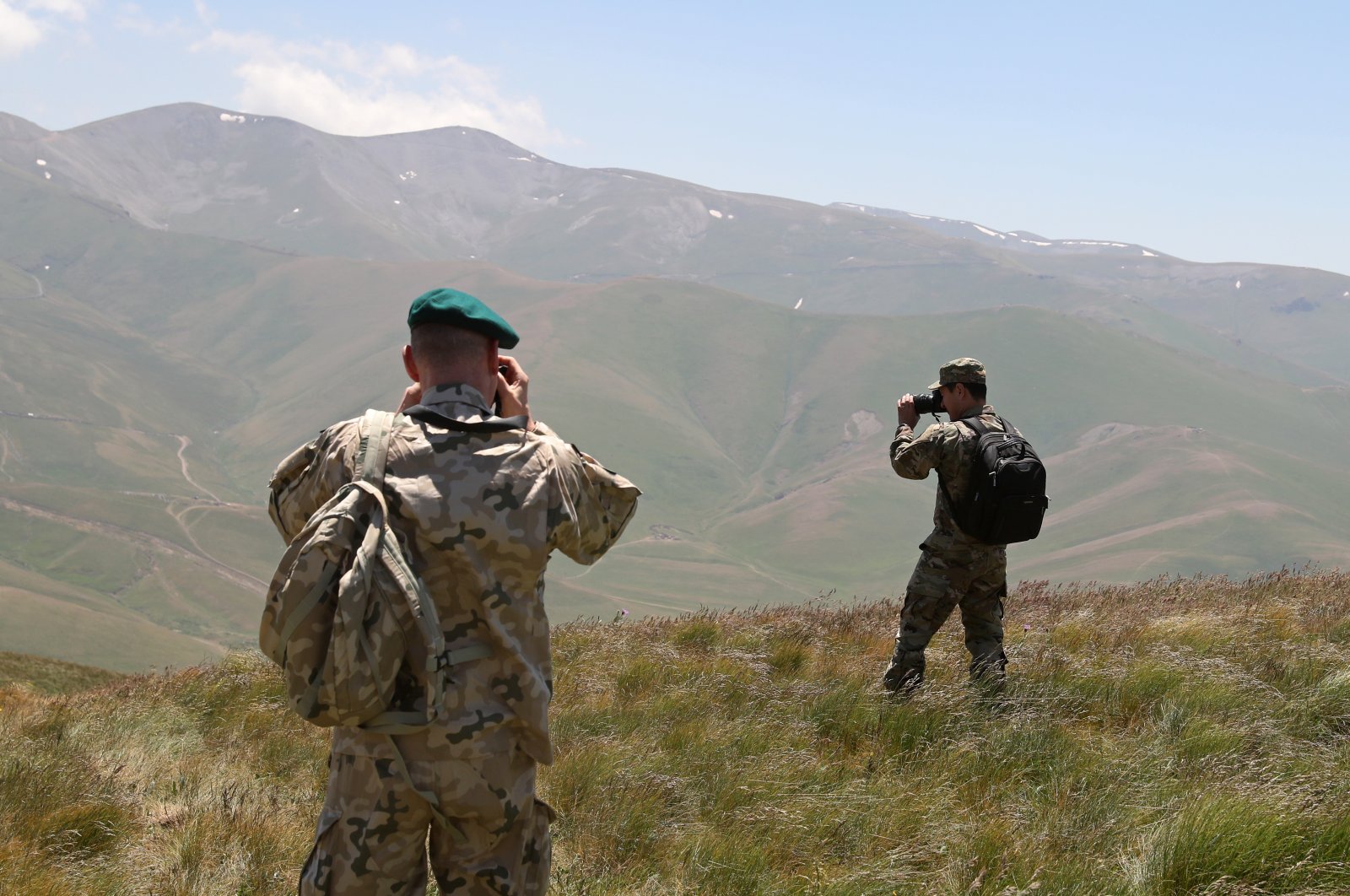 On November 16, intense fighting broke out between Azerbaijan and Armenia in what is considered to be the most severe escalation since the end of the Second Karabakh War. This time, however, the situation spiraled out of control not in the Karabakh region of Azerbaijan but along the Armenia-Azerbaijan border.

The border clashes involving the use of artillery, armored vehicles, and firearms of various calibers unfortunately produced fatalities. There are reports of about six deaths on the Armenian side, the capture of thirteen Armenian soldiers, and the loss of contact with another twenty-four. Conversely, Azerbaijan confirmed seven casualties and ten wounded during the conflict. On the same day, Armenia and Azerbaijan agreed to a ceasefire mediated by Russian defense minister Sergey Shoigu.

Both sides accuse the other of initiating the conflict. Azerbaijan’s defense ministry blames Armenia for “large-scale provocations against Azerbaijan in the Kalbajar and Lachin regions of the state border,” stating that Armenia unsuccessfully “launched a sudden military operation” to “take more advantageous positions.” Armenia, on the other hand, stated that the Azerbaijani forces attacked its eastern border along the provinces of Zangezur (Syunik) and Basarkechar (Gegharkunik).

Whatever the case, Armenia lost two military positions to the Azerbaijani army. Armenia called for Russian intervention under the terms of their 1997 Treaty on Friendship, Cooperation, and Mutual Assistance. Secretary of the Security Council of Armenia Armen Grigoryan also said that Yerevan will turn to other international partners if the crisis cannot be overcome with the help of Russia and the Collective Security Treaty Organization (CSTO).

The November 16 conflict occurred after a few weeks of provocations that did not escalate to violence. However, these provocations increased tensions in Karabakh and neighboring border districts.

Then, in the early morning of November 13, Norayr Mirzoyan, an Armenian resident of Karabakh, threw a grenade at an Azerbaijani checkpoint near the city of Shusha located on the Lachin corridor that connects Karabakh to Armenia. Azerbaijani authorities issued a statement saying that an officer and two soldiers of the Azerbaijani Armed Forces were wounded in the attack. Russian peacekeepers detained Mirzoyan, but they soon released him. While the Azerbaijani side declared Mirzoyan a terrorist and was frustrated by his release, many in Armenia hailed him as a “hero of revenge.” Tensions continued to increase on the following day with numerous shooting incidents reported on both sides of the borderline in the Kalbajar district. Partisans in Armenia were likely inspired by Mirzoyan’s terrorist act and called for compatriots to resume the battle against Azerbaijan.

But what exactly triggered the most dramatic military escalation between Armenia and Azerbaijan since the end of the Second Karabakh War? Recent months have seen diminishing tensions after the skirmishes around Garagol, a lake along the border, this past May. Public pronouncements on the prospect of peace, or at least, a readiness to fulfill border delimitation, have also been more pronounced in the official statements and public rhetoric on both sides. A trilateral meeting between Azerbaijani president Ilham Aliyev, Armenian prime minister Nikol Pashinyan, and Russian president Vladimir Putin was widely expected. The Kremlin’s spokesman, Dmitry Peskov commented that such a meeting was indeed in the works. Consequently, the November violence was rather unexpected.

From Azerbaijan’s point of view, delivering a hard response to November 16 was logical. The “grenade incident” highlighted a number of unpleasant truths not only about the persistent threat of Armenian revanchism but also about the Russian peacekeepers’ lack of control over people and goods entering Karabakh via the Lachin corridor. Baku has expressed discontent with the continuation of unrestrained trips by Armenian officials to Karabakh and the presence of remaining “Artsakh Army” units within the former autonomous region. According to the November 2020 deal, the “army” should have long been disbanded. Within this context, it is logical that Baku was willing to demonstrate that it can protect its armed forces and reconstruction projects in the liberated areas. But what pushed the Armenian side to provoke the battle-hardened and well-entrenched Azerbaijani forces into retaliating?

Most Armenian political and military experts now admit that Yerevan simply does not possess the resources necessary for waging a serious conflict with Azerbaijan. Armenia’s “achievements” from this latest round of fighting support this admission. Armenia’s said “achievements” are deplorable: lost positions and fortifications; the installation of Azerbaijani checkpoints on the Gorus-Kafan road, which previously provided unrestricted access to Armenians, cut off six Armenian villages from the rest of the country; a weakened negotiating position; and another humiliation.

Thus, there can only be two possible explanations for Armenian actions. The first is that the attack was meant to draw international attention to the South Caucasus and act as a jumping-off point to call for an international presence in the conflict zone. The second is that the flareup grew out of the domestic power struggle between Pashinyan’s circle, which is determined to complete the peace process, and military elite close to former president Robert Kocharyan, who hopes to discredit Pashinyan’s government through humiliation.

Both explanations require generous assumptions. The former presumes that the Armenian elite, despite all that has happened since 2020, still believes that Western nations may deploy forces to the region, while the latter presumes the existence of multiple power centers within Armenia and limited government control over the armed forces. However, some indicators hint that the second explanation may contain a grain of truth. These include anti-Pashinyan rallies in Yerevan; the firing of Defence Minister Arshak Karapetyan and his replacement with Pashinyan-loyalist Suren Papikyan; and the prime minister’s unexpected offer to sign a peace treaty with Azerbaijan without delay just as fighting receded.

The November 16 escalation has also exposed three important realities about relations between Armenia and Azerbaijan. First, Yerevan is stuck at an impasse with incongruent and mutually-exclusive positions: Armenia has lamented Azerbaijan’s “violation of Armenian borders and invasion of the Armenian sovereign territory,” but has, at the same time, de facto denied the existence of an uncontestable border by refusing delimitation and appealing to vague historic and ethnic arguments that undermine its own security.

The second reality is that Azerbaijan is determined not to go with the flow, reacting to the ceasefire violations and negotiation disruptions in a hard way to demonstrate its strategic and political preponderance. As President Aliyev has reiterated on different occasions, Azerbaijan is ready to engage with Armenia in diplomatic initiatives to secure peace and stability in the region. But any challenges emanating from Armenia will be dealt with in a harsh way, and no outside power can prevent Azerbaijan from doing so.

The third reality regards Russia’s ongoing unwillingness to assist its formal ally Armenia—the recent show about Yerevan’s “failure to give a written notice to the CSTO” is a good example. For Moscow, it seems that Karabakh and Armenia are now two different matters. While Moscow refuses to satisfy some of Azerbaijan’s legitimate demands regarding Karabakh to retain a pressure tool and gain concessions from Baku, it does not want to help Yerevan vis-à-vis Baku either. The Kremlin considers the resumption of full-fledged conflict to be an outcome as negative as its full resolution, which would question the need for Russia’s military presence in the region.

Finally, it should be noted that the absence of proper communication channels between Baku and Yerevan slows down the peace process, creates unnecessary difficulties, and claims soldiers’ lives. The recent decision to restore the direct contact line between defense ministers is as timely as ever and should be applauded.

Murad Muradov is the co-founder and deputy director at Topchubashov Center, a Baku-based think tank. His areas of expertise cover European politics, politics of identity and nationality, and international political economy.

Simona Scotti is a research fellow at Topchubashov Center, a Baku-based think tank. Her main areas of expertise include post-Soviet states, Western Balkans, and Latin America, and her main interests are related to international law, peacebuilding, and ethnic conflicts.