The China-Iran deal and the lack of transparency 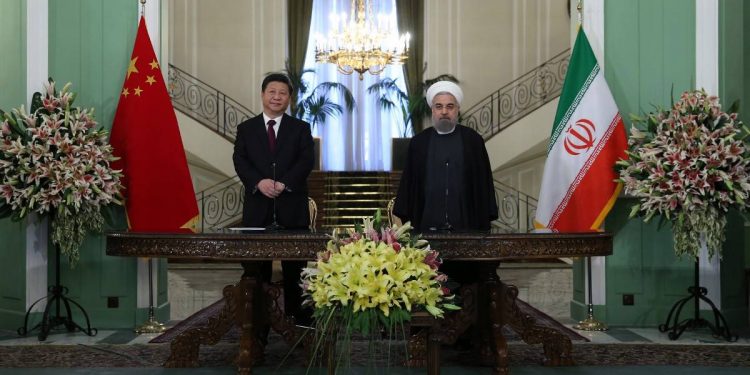 The agreement known as ‘Comprehensive Strategic Partnership’ has not been published which sparked domestic criticism. The reason cited by Iranian officials is that it is ‘non-binding,’ so it is not necessary to disclose the details of the deal.

In 2020, a draft of the deal was leaked, and it provided some relevant details. China is likely to invest an estimated $400 billion over a period of 25 years in Iran. An estimated $280 billion would be spent in the country’s oil and gas sector while $120 billion for upgrading the country’s infrastructure.

In lieu of its investment, China will be guaranteed Iranian oil at a discounted price. Some of the infrastructural projects (specifically rail projects), which are part of the agreement fit in well with Beijing’s Belt and Road Initiative project (BRI). The deal also has a strong strategic component and seeks to strengthen military cooperation between the two countries.

While the Iran-China Comprehensive Strategic Partnership has been in the news since last year, it would be pertinent to point out, that a 25-year strategic agreement was first discussed during Chinese President Xi Jinping’s visit to Iran in 2016. The Chinese President happened to be one of the first heads of state to visit Iran – months after signing of the Iran Nuclear Deal/JCPOA (Joint Comprehensive Plan of Action) in 2015. After US withdrawal from JCPOA in 2018, Iran’s economy was adversely impacted by US sanctions. It is believed that details pertaining to the deal were finalized during Iranian Foreign Minister, Javad Zarif’s China visit in 2019.

US President Joe Biden during his election campaign had been critical of Trump’s Iran policy, and many believed that he may go the extra mile vis-à-vis Iran by returning to the JCPOA unconditionally. However, the Biden Administration has been clear that return to the deal will not be possible without Iran returning to full compliance (Iran has increased uranium enrichment in recent months). Biden’s approach towards Iran has drawn sharp criticism from many Democrats. US Congressman Ro Khanna has stated that Biden Administration’s approach towards Iran lacks imagination, and is status quoist. Khanna while speaking at a virtual event stated: “Let’s just speak plainly; it has been a disappointing start when it comes to Iran policy from the administration. They should have been already trying to get into this deal.”

To be fair, Biden and senior officials have repeatedly spoken about the need for diplomacy, and unlike Trump, they have not allowed their Iran policy to be dictated by Saudi Arabia, but have stuck to their guns. It is believed, that the administration is willing to remove sanctions in certain areas in exchange for Tehran halting 20 percent uranium enrichment. Iran has categorically stated that it would only return to compliance if all sanctions are removed.

In a tweet on April 2, 2021 Iranian Foreign Minister Javad Zarif stated that ‘At virtual JCPOA JC meeting, Iran & EU/E3+2 agreed to resume in-person talks in Vienna next Tues’. While Zarif ruled out an Iran-US meeting, this is a significant development and Washington has welcomed the resumption of these negotiations.

Criticism of the deal

While in terms of messaging, the deal may be important for both Iran and Beijing and it may provide some economic respite. A few points need to be borne in mind. First, the Iran-China agreement has drawn criticism within Iran for its lack of transparency. Government spokesman Ali Rabiei while commenting on this aspect said that the Comprehensive Strategic Partnership is “not an international treaty, or agreement, and does not require parliamentary approval under this legal interpretation.”

Second, in spite of the anti-West sentiment, there is a strong belief that Iran must maintain an independent foreign policy and not become excessively dependent upon China. A number of politicians have questioned the deal arguing that the reason why it has not been made public is that it will cede space to China.  Former President Mahmud Ahmadinejad has said that this deal was being discussed, “away from the eyes of the Iranian nation.”

Apart from this, China has tried to send out a message that its West Asia policy will not be based on choices or simple binaries, as mentioned earlier, Wang Yi visited five other West Asian countries including Saudi Arabia and UAE which currently have strained ties with Iran. There are many in China who believe that Beijing needs to be cautious with regard to the agreement, and it cannot ignore the fact that Tehran is facing sanctions. Interestingly, during his Iran visit, Wang Yi made the point that: “Under the new administration, the Americans want to reconsider their policy and return to the nuclear accord, and China welcomes their move.”

Skeptics believe that the deal is more about ‘posturing,’ and point to the fact that even the commitments by made China are vague.

The Iran-China agreement is important and it will be beneficial economically for both Tehran and Beijing. The agreement may also strengthen ties between not just China and Iran but also strengthen trilateral cooperation between China, Russia and Iran. Like China, Russia too has issued strong statements in favor of the US return to the JCPOA. While the China-Iran 25-year-old agreement is significant, a lot will also depend upon how the Biden administration deals with Iran. In spite of its public posturing, Tehran would not likely to be dependent only upon China, and the removal of economic sanctions will give it the much-needed economic relief and also ensure that its foreign policy is not dictated by any one country.